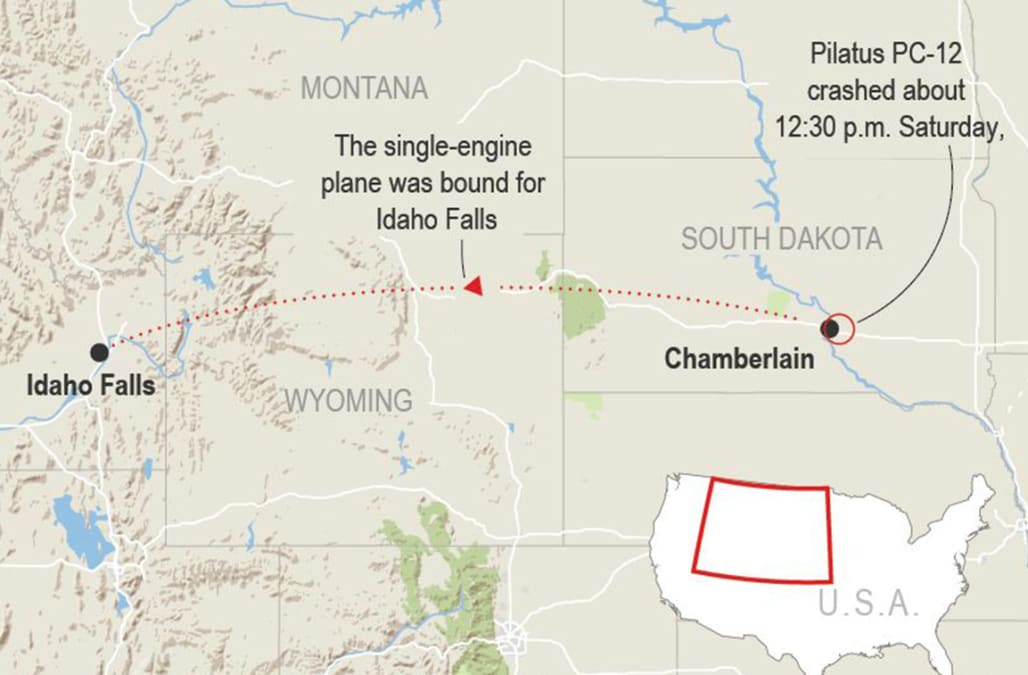 Federal investigators are expected to arrive Monday at the South Dakota site where nine members of an extended Idaho family were killed in a plane crash.

Garza identified the injured as Kirk’s son, Josh, and Jim’s son, Matt, and son-in-law, Thomas Long. All three were hospitalized.

The Hansens were executives with Kyani, which markets nutritional, health and wellness products, as well as with petroleum products distributor Conrad & Bischoff and KJ’s Super Stores.

East Idaho News, which first identified the victims, reported that the party had been on a hunting trip to South Dakota, one of the nation’s top destinations for pheasants.

Related: How to survive a plane crash, according to science

How to survive a plane crash, according to science

The safest thing to do with your carry-on … Is leave it on the plane. Flight crews ask you to keep your luggage clear of the aisles for a reason; in the event of an evacuation, you don’t want it blocking an escape route. With as little as 90 seconds to evacuate a burning place, the precious time spent reaching for luggage could be a life and death decision for someone. Learn about the 22 things flight attendants won’t tell you.

The safest place to sit on the plane … is behind the wings. A Popular Mechanics study of 20 commercial jet crashes with both fatalities and survivors found that passengers seated in the rear cabin (behind the wings) had a 69 percent chance of survival, compared with just 49 percent for those in first class. But you don’t have to sacrifice leg room for safety’s sake: exit rows are perhaps the safest place to sit on the whole plane. In the event of an evacuation, the closer you are to an exit, the higher the chance you’ll escape unscathed. Here’s how to pick the best seat on a plane for every need.

The safest way to sit during a crash … Is to brace yourself (literally). In a 2015 crash simulation, Boeing found that passengers who both wore their seat belts and assumed a brace position (feet flat, head cradled against their knees or the seat in front of them if possible) were likeliest to survive a crash. Seat-belted fliers who did not brace suffered serious head injuries, and those with no seat belts or bracing died on impact. Just don’t fall for these 20 air travel myths you need to stop believing.

The safest way to dress … is un-flammably. The National Transportation Safety Board tells us that 68 percent of plane crash fatalities occur in post-crash fires, not in the initial impact. Fortunately, here’s a scenario you can plan for days in advance while you pack your suitcase: On the day you’re flying, avoid wearing flammable synthetic fibers like polyester and nylon. Instead, opt for natural materials like cotton or wool (good news if you’re a sweatpants-at-the-airport kind of person). It’s also a good idea to favor long pants (like jeans) and a long-sleeved shirt for extra protection from flames and sharp objects. Don’t miss these other 16 mistakes you need to stop making before your next flight.

What to wear on your feet

The best shoes to wear … never leave your feet. Hassle-free flip-flops might seem like a good idea for braving airport security, but in the chaos of a crash or evacuation, they’ll only slow you down. Likewise, high heels can lead to stumbling, and may even be sharp enough to pop the inflatable exit slide. Wear a pair of comfy flats or sneakers, and keep them on your feet through the whole flight. Not only can loose shoes get in other passengers’ way and hinder your own mobility during an evacuation, but also remember that nobody wants to smell your stinky feet. And statistically, that is a far greater threat to air travel than any crash. Learn 18 more things you should never do on an airplane.

Brian Wood, owner of a funeral home in Idaho Falls, lamented the deaths on Facebook. He called the Hansens “pillars of our community” and wrote that they had offered many times over the years to help pay expenses for someone who might not be able to afford it.

“Our community has a dark cloud over it now,” Wood wrote. “They will never know the many lives they touched.”

Twelve people were aboard the Pilatus PC-12 bound for Idaho Falls when it crashed within a mile after takeoff in Chamberlain about 12:30 p.m. Saturday, National Transportation Safety Board spokesman Peter Knudson said.

Federal investigators — one from Washington, D.C., and two from the Chicago area — likely would reach the crash site on Monday, Knudson said. Local authorities were guarding the site on Sunday.

Chamberlain and parts of South Dakota were under a winter storm warning Saturday and Brule County emergency manager Katheryn Benton said planes were unable to land at Chamberlain at the time of the crash.

Weather will be among several factors investigators will review, although no cause for the crash has been determined, Knudson said.

Man arrested for threatening to…

Trump expected to tap US…