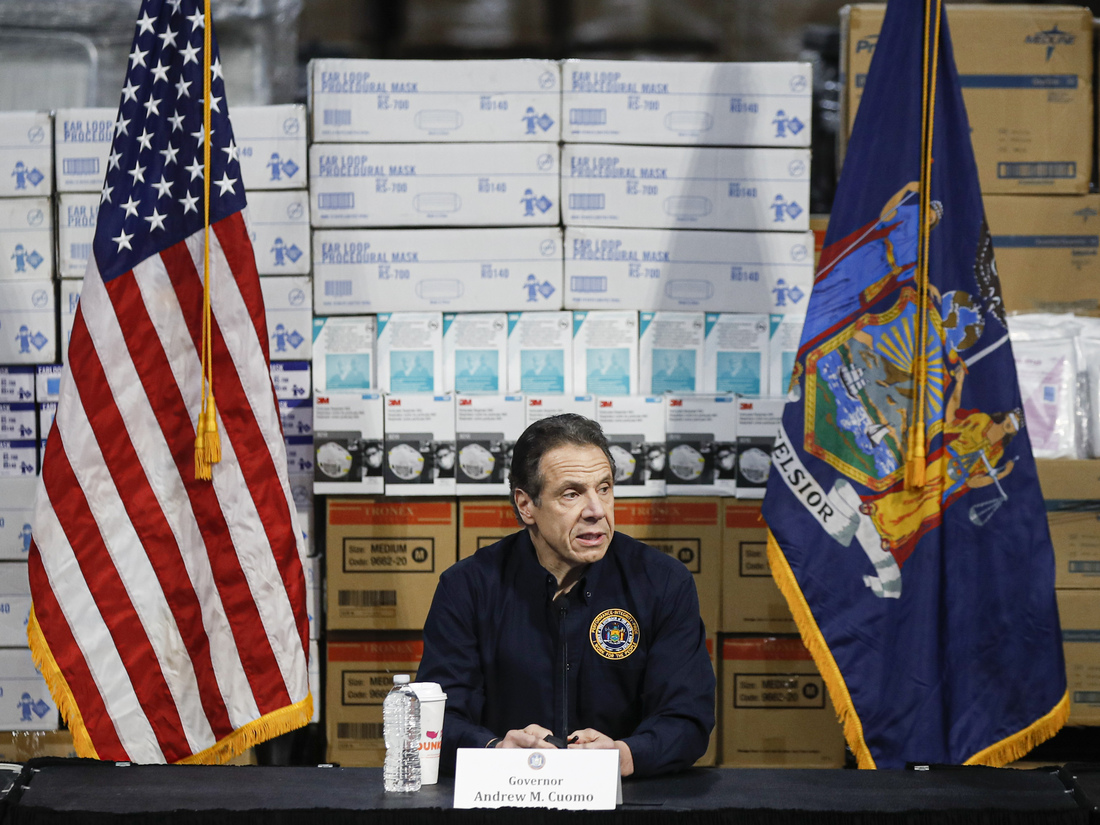 “We haven’t flattened the curve, and the curve is actually increasing,” New York Gov. Andrew Cuomo said of new coronavirus cases Tuesday. Cuomo said his state now has more than 25,000 cases, as he gave an update on the COVID-19 outbreak at a news conference at Manhattan’s Javits Center, which will house a temporary hospital. 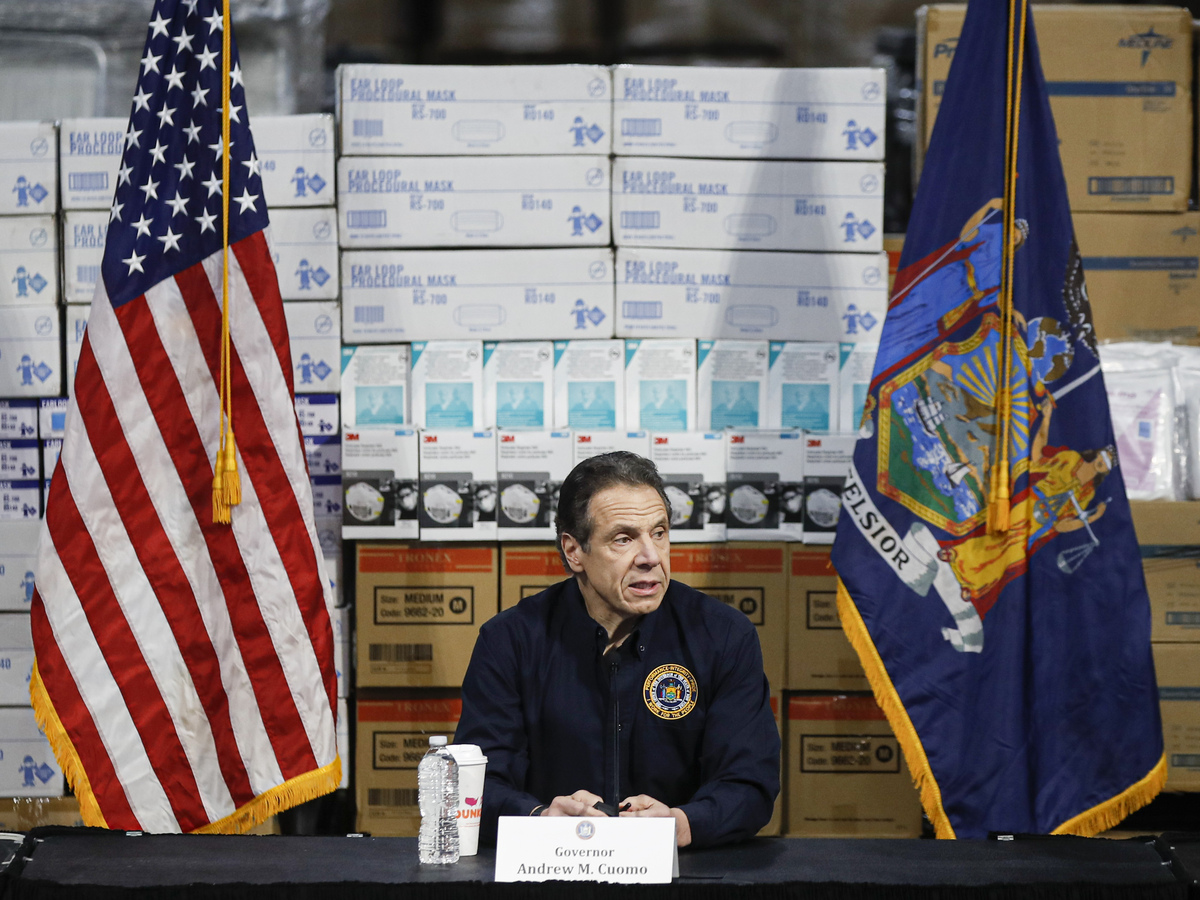 “We haven’t flattened the curve, and the curve is actually increasing,” New York Gov. Andrew Cuomo said of new coronavirus cases Tuesday. Cuomo said his state now has more than 25,000 cases, as he gave an update on the COVID-19 outbreak at a news conference at Manhattan’s Javits Center, which will house a temporary hospital.

The rate of new coronavirus cases in New York is “doubling about every three days” and is speeding up even more, Gov. Andrew Cuomo said Tuesday. “That is a dramatic increase in the rate of infection.”

The new estimates are “troubling and astronomical numbers,” the governor said. He added that the apex of the curve of rising coronavirus cases in New York is still 14 to 21 days away, according to the latest projections. The governor also said New York is in urgent need of ventilators and other vital resources.

As of around midday Tuesday, New York had 25,665 coronavirus cases — roughly half of the U.S. total. The state says at least 210 people there have died from COVID-19.

So far, the governor said, New York has not flattened the curve — the metric many officials are following as they attempt to keep the contagious respiratory virus from overwhelming public health systems.

“We haven’t flattened the curve,” Cuomo said, “and the curve is actually increasing.”

The COVID-19 pandemic has already put New York residents under strict limits in their daily lives, with businesses ordered to shut down and people told to isolate themselves. Citing those restrictions and New York’s success in becoming a leader in testing people for the coronavirus, Cuomo said, “In many ways, we have exhausted every option available to us.”

Along the way, the state’s health experts have sought answers to vital questions such as how quickly the coronavirus spreads and whether it can be slowed down. So far, the results are not encouraging.

“We’re not slowing it, and it is accelerating on its own,” Cuomo said.

“We were looking at a freight train coming across the country — we’re now looking at a bullet train,” the governor said, repeating a comment that he said originally came from one of his state’s health forecasters.

The latest rise in cases has forced a dramatic revision of the state’s projections for how hard COVID-19 will hit people and hospitals in the state. In recent days, Cuomo has said New York would need around 110,000 hospital beds to deal with the crisis — more than double the 53,000 it currently has.

“The new projection suggests that the number of hospital beds needed could be as high as 140,000,” Cuomo said.

Cuomo issued an executive order on Monday requiring all hospitals in the state to boost their capacity by 50% to meet the expected need. If the latest projections prove accurate, the state will have to find even more hospital beds now. It will also need many more intensive care unit spots: New York currently has around 3,000, but the new projections say that at the height of COVID-19’s outbreak in New York, the state could need space for 40,000 people to be in intensive care at the same time.

The state also desperately needs ventilators to help people breathe after their lungs have been compromised by COVID-19. New York has now procured about 7,000 of them; its estimates call for an additional 30,000.

To try to stretch the lifesaving resource as much as possible, the governor said, the state is experimenting with ways to split one ventilator between two patients, who would be in side-by-side beds.

“It’s difficult to perform. It’s experimental,” Cuomo said. “But at this point, we have no alternative.”

The governor reiterated his call for the federal government to help ease the critical shortage, saying the Trump administration could use the Defense Production Act to compel companies to produce equipment. Another option, he said, would be for the government to use its stockpile of roughly 20,000 ventilators.

Cuomo said he has asked Health and Human Services Secretary Alex Azar to let New York use the ventilators — and he said he also reminded Azar that his agency’s first priority is the health of Americans.

The ventilators should be deployed around the country as they are needed, Cuomo said. And he stressed that with the huge number of confirmed cases in New York, the state is now dealing with a much larger problem than other states. The governor also referred to his state as a test case for the rest of the country, warning that other communities will soon find themselves in similar predicaments.

“New York is the canary in the coal mine,” Cuomo said. “New York is going first. We have the highest and the fastest rate of infection.”

The governor said his state will not be the only one with a dire need for ventilators and other key resources.

“What happens to New York is going to wind up happening to California and Washington state and Illinois — it’s just a matter of time,” he said. “We’re just getting there first.”

After the coronavirus apex passes in New York, the governor said, the ventilators could be moved to other states where they’re also needed.

“I will take personal responsibility for transporting the 20,000 ventilators anywhere in this country that they want,” Cuomo said.

Texas, Florida may be the…

Coronavirus leads to surge in…

To keep the lights on…

IRS Adds To Confusion About…