Is Limited by Shortage

For most of their medical care, 169,000 residents of Kenosha County, Wis., don’t have to go far. There are three hospitals and more than 75 primary-care physicians practicing in the county, which fronts Lake Michigan in the southeastern corner of the state midway between Milwaukee and Chicago.

Until recently, however, there was one type of care none of these doctors and hospitals would provide: medication for an opiate addiction.

In 2017, annual opioid-overdose deaths in Kenosha County rose to 46, nearly double the number from a decade earlier, but not a single full-time physician practicing in the area had taken the required training and received permission from the federal government to prescribe buprenorphine, a medication used to help patients overcome addiction and prevent overdose.

At that time, the nearest full-time clinician who could prescribe the medication was likely David Galbis-Reig, who practices in Racine County, the adjoining county to the north. Dr. Galbis-Reig, president of the Wisconsin Society of Addiction Medicine, says people from Kenosha would commute to his practice, but he couldn’t accommodate all of the patients.

“It was a problem,” Dr. Galbis-Reig says.

Many addiction experts say the key to reversing the nation’s spike in opioid-overdose deaths is medication-assisted treatment, which includes a prescription medicine to suppress cravings, coupled with counseling and social support. In 2018, a report by the U.S. Surgeon General called these treatments the “gold standard” for treating addiction, and many studies show medications cut the risk of fatal overdose by as much as 50%.

But of the two million Americans estimated to have an opioid-use disorder, only a fraction are receiving such therapies. Part of the problem is that doctors—whose prescribing practices helped spark the opioid crisis—have only just begun to embrace their role in extinguishing it.

The first medication used for addiction treatment, methadone, has been heavily regulated for decades because it is considered to have a high potential for misuse. Only specialized programs can dispense it, and patients have typically been required to come in to take their daily dose under supervision.

When a second compound, buprenorphine, was approved for use in 2002, Congress allowed any physician to prescribe it—as long as the doctor had taken an eight-hour training and obtained a so-called X waiver from the Drug Enforcement Administration to do so. With over a million doctors in the U.S., this had the potential to dramatically increase access to addiction treatment. Yet even as the opioid crisis intensified, less than one in 10 of the nation’s physicians took the training and received the waiver needed to prescribe the drug.

According to a January report from the U.S. Office of Inspector General, 40% of U.S. counties still have no clinicians permitted to prescribe buprenorphine, even though the U.S. recorded 46,000 opioid-overdose deaths last year.

The coronavirus pandemic, meanwhile, further complicated treatment access for some, forcing many clinics and providers to reduce their hours or end in-person visits. Federal authorities temporarily loosened regulations, allowing some patients to obtain up to four weeks of methadone or to start a buprenorphine prescription without an in-person consultation. Still, accessing addiction treatment remains difficult for many.

To close the treatment gap and normalize the use of addiction medication, advocates and some lawmakers have proposed requiring all medical residents to receive training in treating addiction. Physician surveys have found that some doctors are wary of taking on the role because they believe patients seeking help with their addictions will be difficult or time-consuming, while others worry the medications are complicated to administer.

Sarah Wakeman, medical director of the Substance Use Disorder Initiative at Massachusetts General Hospital, says the reality is quite different. “Treating opioid-use disorder is arguably one of the most rewarding things that can be done in medicine,” she says. “You have someone with a potentially fatal condition, you offer them effective treatment, and there’s this sort of rapid and almost Lazarus-like effect of people getting better.”

But some say the way buprenorphine is regulated can send the opposite message. Clinicians who receive waivers to prescribe it for addiction must agree to limit the number of patients they treat with the drug, starting at 30 or 100 the first year, depending on their qualifications and the setting. And, paradoxically, a waiver isn’t required to dispense buprenorphine as a pain reliever, in a formulation that poses more risks for addiction.

As part of the Comprehensive Addiction and Recovery Act passed by Congress in 2016, nurse practitioners and physician assistants were allowed to obtain waivers to prescribe buprenorphine which helped double the number of providers in rural areas. But some states don’t allow those professions to prescribe buprenorphine without a physician’s supervision, blunting their impact on patient access.

In December 2018, Dr. Wakeman and other clinicians published a call to “X the X waiver,” a position since echoed by several medical professional societies, as well as the National Academies of Science in January. Bipartisan legislation also was introduced in the U.S. House that would deregulate the prescription of buprenorphine, though it has been sidelined because of the coronavirus pandemic.

But many acknowledge that the waiver requirement is just one part of medicine’s reticence to treat addiction, and eliminating it but one step toward improving access. “The task is really to change the culture so that we actually treat people with [addiction] like it’s a disease,” says Josiah Rich, a professor of medicine at Brown University.

To that end, Dr. Rich supports requiring all residency programs to make addiction treatment a part of their standard curriculum. The Accreditation Council for Graduate Medical Education had planned to convene scores of medical specialties and professional societies in April to consider such a requirement, at least for some specialties, but the meeting was canceled due to the pandemic. It has been tentatively rescheduled for October.

If clinicians don’t take the lead, Congress might step in. Late last year, Rep. Lori Trahan (D., Mass.) introduced legislation that would require all doctors who prescribe controlled substances to also undergo training in treating addiction. She drew a comparison to the way medicine made recognizing the signs of domestic violence a part of medical education across many specialties.

Over half of counties in high need of opioid addiction treatment services don’t have enough practitioners permitted to administer buprenorphine treatment in the office setting. 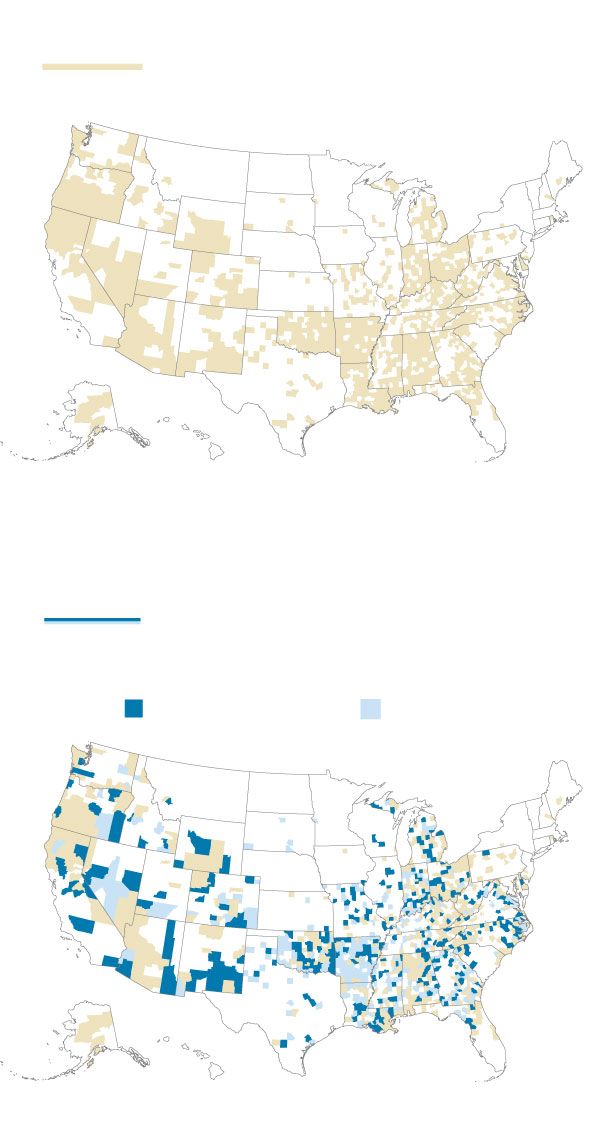 of U.S. counties have a high need for buprenorphine treatment

“If we’re going to get after the stigma of substance-use disorder, we have to make it discussable in doctor’s offices,” she says. “And in order to do that, we have to give doctors the tools to have those conversations.”

In Wisconsin, it was the urgency of the opioid crisis that ultimately prompted action. In 2016, Jeff Tiemstra started a small rural family-medicine program for Aurora Health Care in Elkhorn, Wis., 10 miles west of the Kenosha County line. At first he was skeptical of medication-assisted treatment. But after reviewing the research, he obtained his waiver and within two months, he hit his patient cap.

He says some patients told him they had been driving as far as Chicago, two hours south, to see a willing prescriber. Other patients said they had visited other physicians for years without disclosing their addictions.

Now all the faculty and residents in Aurora Health’s Elkhorn program have obtained waivers, and the group is currently treating about 170 patients with buprenorphine. Getting the waiver has become a matter of course for new trainees, and Dr. Tiemstra says he would be in favor of making it a residency requirement nationwide. “Addiction is a very common mental-health disorder, and they need to be trained in the most effective treatments for it.”

Since December 2018, Wisconsin’s Department of Health Services has been holding monthly waiver trainings around the state, led by Dr. Galbis-Reig. By April 2020, the number of waivered providers in Wisconsin had risen 54%, according to Paul Krupski, the department’s director of opioid initiatives.

The effects have been felt in Kenosha County. Preliminary data from the county medical examiner’s office show 25 deaths in the first 11 months of 2019, the lowest number recorded in nearly a decade.

Mr. Alcorn is a writer in New York. Email him at reports@wsj.com.

What steps should be taken to systematically expand the number of physicians who can treat people with opioid addiction? Join the conversation below.

Boeing Board Accused in Lawsuit…

Cramer recommends Palantir at the…

NYC outdoor dining will be…

How Tesla’s Next Deliveries Data…