Alexei Navalny is unconscious and on a ventilator, his spokeswoman said on Thursday. The Russian opposition leader, center, is seen here during a rally in Moscow last year along with his wife, Yulia, right. The rally marked five years since the assassination of politician Boris Nemtsov. 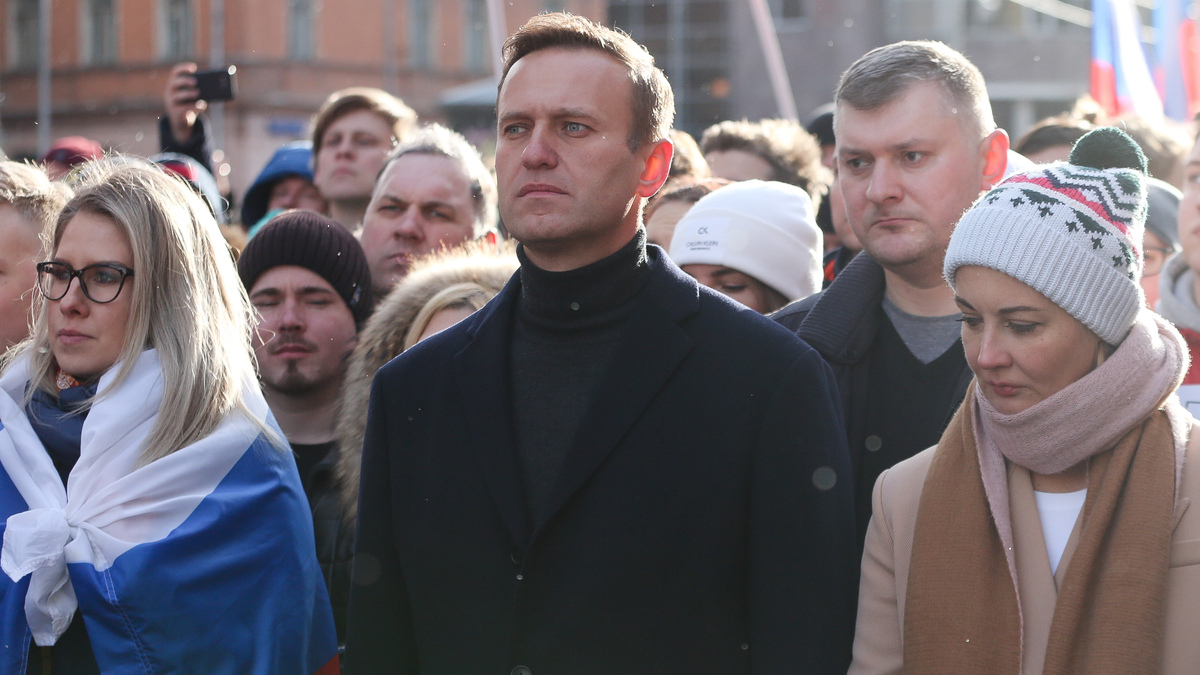 Alexei Navalny is unconscious and on a ventilator, his spokeswoman said on Thursday. The Russian opposition leader, center, is seen here during a rally in Moscow last year along with his wife, Yulia, right. The rally marked five years since the assassination of politician Boris Nemtsov.

Alexei Navalny, Russia’s most outspoken critic of President Vladimir Putin, is fighting for his life in a hospital, and his spokeswoman says she believes Navalny was poisoned as he was flying from Siberia back to Moscow.

Navalny is unconscious and on a ventilator, spokeswoman Kira Yarmysh, who had been traveling with the opposition leader, said via Twitter.

Navalny drank some tea at the airport in Tomsk, Yarmysh said, adding that he began feeling unwell shortly after his commercial flight took off. His deteriorating condition prompted the plane’s pilots to make an emergency landing at Omsk, some 550 miles away.

A doctor who spoke to reporters at the hospital “said Navalny is in serious but stable condition in the intensive care unit,” NPR’s Lucian Kim reports. “But he said poisoning is only one possible diagnosis.”

The only thing Navalny drank before becoming sick was the tea, according to Yarmysh, who says she was with Navalny from early in the morning.

Navalny’s personal doctor Anastasy Vasilyeva says she is asking the Kremlin to help arrange his transfer to a poison treatment center in Europe. Vasilyeva flew to Omsk Thursday along with the politician’s wife, Yulia. But after they arrived at the hospital, they were prevented from seeing him, both Vasilyeva and Yarmysh say.

The opposition leader’s arrival at the hospital triggered a massive police response — Yarmysh said she believes police officers may now outnumber doctors at the hospital where Navalny is being treated. She posted a photo showing what she said was a small portion of the officers, gathered in the hallway outside of Navalny’s room in intensive care.

Navalny, 44, is an energizing force for Russia’s opposition, conducting investigations that expose corruption and mobilizing against President Vladimir Putin’s regime. He attempted to run against Putin in the 2018 presidential election, but he was barred from doing so. Authorities cited a fraud conviction that Navalny describes as retribution for his activism.

It’s the second time Navalny has possibly been poisoned. He was hospitalized in July of 2019, days after being jailed for calling for street protests, with severe swelling and other symptoms. His sudden illness is also suspicious because a number of Kremlin foes have been poisoned or killed during Putin’s 20 years in power.

Recent high-profile cases include the use of a Novichok nerve agent to poison former KGB spy Sergei Skripal and his daughter Yulia in the U.K. But Navalny’s possible poisoning also brings to mind the targeted killing of Kremlin critic and former spy Alexander Litvinenko, who died after drinking tea that was laced with polonium-210 in a London hotel.

But experts also note that because of his repeated successes in exposing corruption among high-ranking government officials and state-controlled companies, Navalny has a long list of enemies in Russia.

“Navalny could have been poisoned by anyone from a long list of ill-wishers,” Russian political analyst Tatiana Stanovaya said. “He’s garnered hundreds of enemies in the past few years, including some hardened individuals. And times are such that the cost of doing something like this barely matters.”

On Thursday, Semyon Kochkin, an activist and ally of Navalny, said via Twitter that it would be “impossible” to poison Navalny without Putin’s approval. He added that the ongoing unrest and public anger over a hotly disputed election in Belarus has made Russia’s leaders afraid of similar scenes playing out in Russia.

If Navalny were to die, it would be a seismic event in Russian politics.

“It would be a huge loss for the opposition,” Kim says. “What Navalny has done or accomplished is really energize a new generation of Russians who have only known Putin as their president. And Navalny has shown them how to organize at the grassroots level, how to investigate corruption and how to harness social media also for fundraising purposes.”