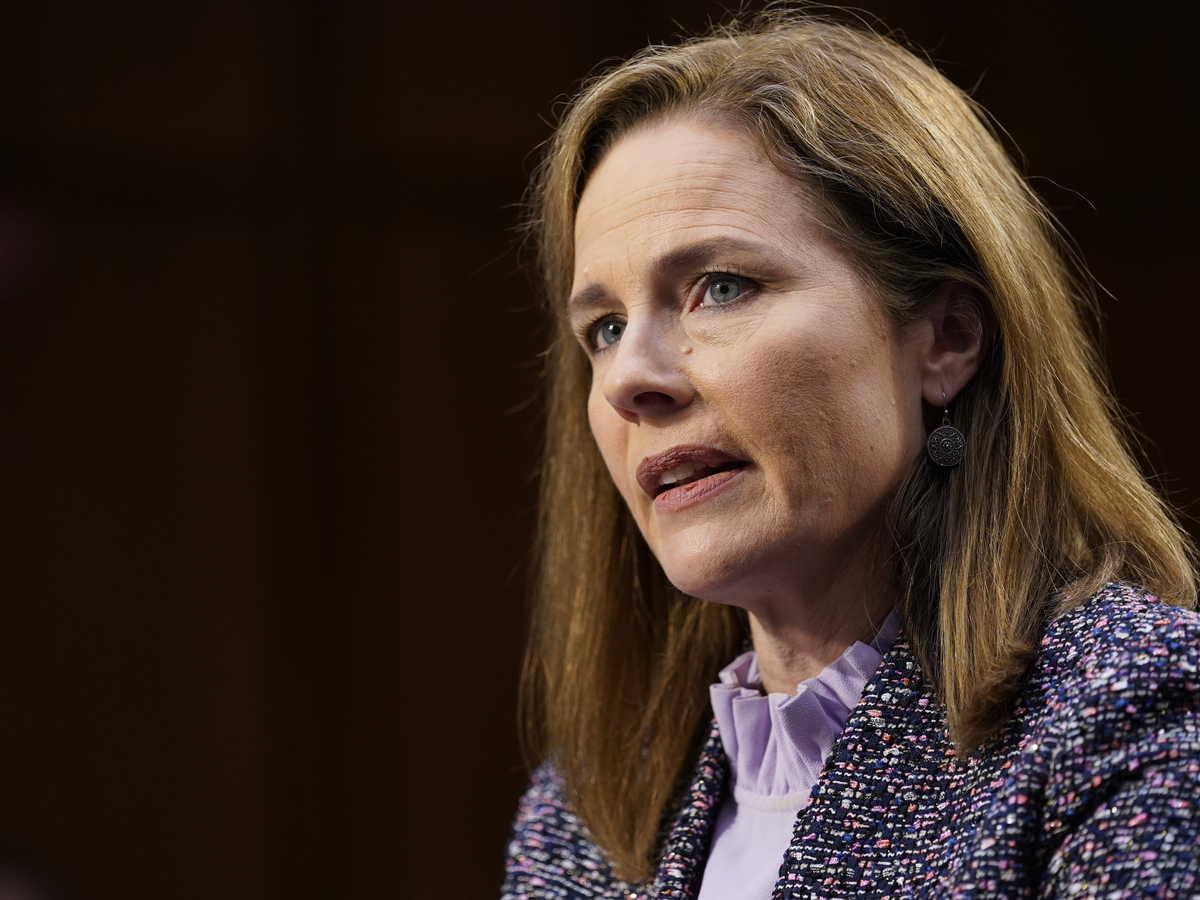 Amy Coney Barrett, President Trump’s nominee to the Supreme Court, sat for nearly 20 hours of questioning by 22 members of the Senate Judiciary Committee over two days. At the outset of the process Judiciary Chairman Lindsey Graham acknowledged her confirmation by the panel was all but guaranteed.

“This is probably not about persuading each other. Unless something really dramatic happens, all Republicans will vote yes and all Democrats will vote no and that will be the way the breakout of the vote,” Graham said. But he added that the hearings give the American people the chance to “find out about Judge Barrett.”

The hearings revealed little about Barrett’s views on major legal issues like health care, abortion rights, voting rights or gun rights. Instead those watching learned about her overarching approach to the law as an originalist, who believed the role of a justice was to adhere to the text of statutes rather than interpret or make policy from the bench. She skillfully parried back and forth with Democrats who were frustrated she wouldn’t be pinned down, and kept a cool, calm demeanor, even as many warned her addition to the court could adversely impact millions of Americans. At one point Texas GOP Sen. John Cornyn asked her to show what notes she was using to prep for answers and she held up a blank notepad, demonstrating that she was capable of talking for hours on end about a broad range of legal issues without any notes.

With a nationally televised audience and wall-to-wall news coverage, members on both sides of the dais used their time to make political arguments. The election loomed large over the proceedings. Several GOP senators, including Graham, are in increasingly tight re-election bids, and as the prospects for Democrats to retake control of the chamber increased, even over the course of the hearings. The incentive to wrap up the confirmation review and get the Barrett vote to the Senate floor before Nov. 3 was palpable, as two GOP members of the panel who tested positive for the coronavirus after attending an event unveiling Barrett’s nomination released letters clearing them to participate in person without posing any health risks to others.

Nominees for the high court in modern times have deliberately avoided directly responding to questions. They point out that judicial ethics rules require that judges should not weigh in on any issue that could come before them.

Barrett cited the woman whose seat she would take — the late Ruth Bader Ginsburg — who established what became known as “Ginsburg rule.” At several points Barrett reiterated that this meant “no hints, no previews, no forecasts.”

Democrats were, not surprisingly, not satisfied with that response, or Barrett’s stream of non-answers on a range of issues. They said that President Trump publicly vowed to appoint judges that would overturn Obamacare and that recently he pushed for speedy confirmation of his nominee to the high court in the event that the 2020 election results ended up before the court. GOP senators argued they were making leaps and suggesting some kind of back-room deal.

“Read the tweets!” Illinois Sen. Dick Durbin said about the president’s regular statements on these issues.

Barrett also refused to say whether she believed climate change was a threat, or whether the administration’s policy on separating children from their parents at the southwest border was appropriate, saying she would not opine on contentious public policy issues.

As soon as Barrett was nominated, the president and others portrayed her as a female version of her mentor, the late Justice Antonin Scalia, for whom she clerked. Democrats reminded the audience of that, but Barrett made a point of downplaying the comparison, and insisting she would chart her own path.

“If I were confirmed, you’d be getting Justice Barrett, not Justice Scalia,” she said.

Democrats zeroed in on health care

The Supreme Court is slated to hear a case involving the Affordable Care Act just a week after the November election. Democratic presidential nominee Joe Biden’s strategy over the last several months has been to run against the president’s handling of the coronavirus pandemic and to tie that to his pledge to undo Obamacare. For the most part, Democrats tried to turn the hearings into a forum on the health care law. During their opening statements many sat next to large posters of constituents who they said were struggling with severe health issues and worried about their coverage. They argued that Barrett’s writings and selection by the president could mean she would be a vote on the court to dismantle the law.

Over and over Barrett said she had no agenda, and that she never made any deal or discussed the issue with the president before her nomination.

She was pressed multiple times by Democrats about a January 2017 law journal article in which she critiqued Chief Justice John Roberts’ reasoning for upholding the law in a key decision.

But she maintained, “I’m not here on a mission to destroy the Affordable Care Act.”

The pending case has to do with the issue of “severability,” whether a key provision of the law — the individual mandate requiring insurance — is legally sound, and whether pulling it out would undermine the entire law. GOP briefs filed by the administration argue for invalidating the statute. But Barrett, under questioning, said the presumption “is always in favor of severability.”

Pressed about her writings by Minnesota Sen. Amy Klobuchar, Barrett insisted there was no deliberate pitch to show she was open to GOP attempts to legally take down the law that they have been unable to do with legislation. “I have no animus or agenda for the Affordable Care Act.”

But Durbin again reminded those watching that the president who appointed her was clear on the issue and that was the “orange cloud” over her nomination.

Abortion and debate over “super-precedents”

The issue of abortion rights is always a flashpoint in Supreme Court confirmation hearings. Democrats repeatedly attempted to pin Barrett down on whether she viewed the landmark case providing protections for women who elect to have abortions, Roe v. Wade, was settled law, but she sidestepped the issue. She maintained that if she signaled one way or another it would invite litigants to frame legal strategies around her comments.

But in an exchange with Klobuchar, Barrett stated that she viewed a half a dozen cases as “super-precedents” — cases that could not be overturned because they are established law.

She pointed to a case outlawing school segregation, but did not include Roe in that group, explaining that there continues to be litigation on the issue.

“Roe is not a super-precedent because calls for its overruling have never ceased, but that doesn’t mean that Roe should be overruled.” That led Klobuchar and other Democrats to conclude that she was open to considering a challenge to abortion laws. Klobuchar lamented that without answers one was left to “follow the tracks” based on Barrett’s writings.

With the presidential election mere weeks away and concerns about close contests or legal challenges, Barrett was asked if she would recuse herself if such a case came before the high court. She assured the committee she would go through the traditional process justices use to determine whether it’s appropriate for them to rule a case.

But she also pushed back at the notion she was being rushed on the court to tip the scales. “I certainly hope that all members of the committee have more confidence in my integrity than to think I would allow myself to be used as a pawn to decide this election for the American people.”

Democrats also tried to get her to explain what should happen if the president fails to accept a ruling. Barrett said no person was above the law, but also said “the Supreme Court can’t control whether or not the president obeys.”

Barrett also said she can’t answer a question about whether the president has an absolute right to pardon himself because it hasn’t been tested in court and is a question that calls for legal analysis.

GOP Senators chided Democrats for playing politics with the hearing. One after another they praised Barrett’s ability to balance a large family with seven children and a successful legal career.

Iowa Sen. Joni Ernst, one of two female Republicans on the committee, touted the historic moment of adding a woman to the court in the same year women were marking 100 years of getting the right to vote.

Republicans also went into the hearings spoiling for a fight with Democrats over Barrett’s religious views, but that didn’t materialize.

During her 2017 confirmation hearing for her current circuit court post, the top Democrat on the panel, Sen. Dianne Feinstein, remarked about Barrett’s Catholic faith, “the dogma lives loudly within you.” Republicans accused Democrats of an anti-religious bias and some used their opening statements to chastise any who would suggest that Barrett’s religious views would interfere with her job as a judge.

Ernst told Barrett that opponents were “attacking your faith and your precious family … attacking you as a mom and a woman of faith.” But Democrats, disciplined on keeping the focus on health care, largely steered clear of raising the issue. Some outside liberal groups did contend that some conservative tenets of Catholicism would impact on cases. But when Democrats raised questions about contraception or abortion they worked to keep the questioning lines to writings or speeches by Barrett, not any commentary on her faith.

Still Republicans periodically argued the Democrats’ line of questioning was unfair or condescending toward the accomplished jurist. Tennessee Republican Sen. Marsha Blackburn said Democrats were using the hearings to “spread some fear and misinformation” about health care. She complained that they were trying to paint Barrett as “a monster with an agenda.”

Technical issues periodically interrupted the hearings and the coronavirus pandemic made some senators decide to participate remotely. But the hearings overall were far more civil than the raucous and testy exchanges witnessed during the committee’s consideration of Brett Kavanaugh’s nomination in 2018.

Graham admitted he was worried, given the unpredictable nature of 2020, that things could go awry. Closing out the questioning period he concluded while the hearings didn’t change anyone’s minds they showed the committee could function. He also said that Kavanaugh’s confirmation forever changed the ability to garner large bipartisan votes on nominees to the high court.

“In another time, in another place, you would get everybody’s vote,” Graham told Barrett.

Barrett’s ability to maneuver through complicated legal questions and not raise any vetting issues ensured that the process would move forward at a quick pace, despite the controversy over whether or not it should be happening at all when 40 states are already voting in the presidential election.

Graham celebrated Barrett’s place in history on Wednesday, saying, “this is the first time in American history that we’ve nominated a woman who is unashamedly pro-life and embraces her faith without apology, and she is going to the court.”

The committee will hear from an outside panel of supporters and opponents of Barrett’s nomination on Thursday, but is expected to approve her nomination on a party line on Oct. 22. Senate Majority Leader Mitch McConnell, R-Ky., is expected to move for a full Senate vote the week before the election.