Once President-elect Joe Biden assumes office on Inauguration Day, Twitter could remove President Trump’s special privileges as a high-profile world leader and treat his account as a normal one.

Twitter confirmed reports that a change in the account’s status could lead to harsher enforcement actions – although a spokesman said the policy was nothing new.

The platform has a public interest exemption for the accounts of world leaders, whose words are generally newsworthy and important for their citizens to read, even if they violate the rules. 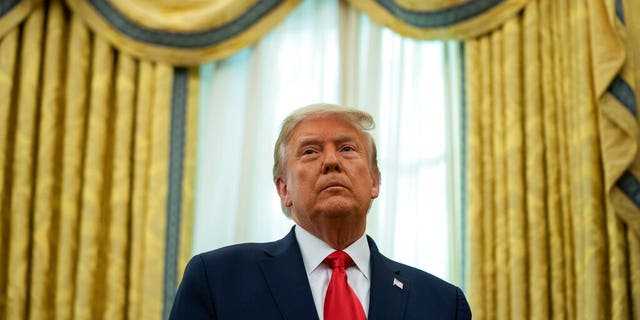 President Donald Trump listens during a ceremony to present the Presidential Medal of Freedom to former football coach Lou Holtz, in the Oval Office of the White House, Dec. 3, in Washington. (AP Photo/Evan Vucci)

TULSI GABBARD URGES TRUMP NOT TO ‘BACK DOWN’ AGAINST BIG TECH

But the exemption does not apply to former world leaders, a spokesman said.

Trump’s personal Twitter account has more than 88 million followers, and his most recent five tweets early Friday evening each received more than 50,000 likes – with the highest racking up nearly 140,000.

But his tweets about unsubstantiated claims of voter fraud have garnered warning tags from Twitter that read, “This claim about election fraud is disputed.”

Even those posts, however, receive tens of thousands of likes and retweets. Twitter also took action against individual tweets from the president before the election, but stopped short of punishing his account.

The warning labels could be replaced with stricter censorship on the platform. Twitter’s policy is to ban accounts that promote violent extremism, share personal information of others in order to harass them (also known as doxing), or engage in abusive behavior or operating fake accounts, among other violations.

A possible Trump crackdown wouldn’t be a first for Twitter. The company blocked the New York Post in October after it refused to take down a tweet referring to a story about controversial emails allegedly found on Hunter Biden’s laptop. The Post’s ban was later lifted.

An outgoing employee in 2017 also briefly deactivated Trump’s personal account on his or her last day on the job. It was restored 11 minutes later.

That same year, the company temporarily suspended actress Rose McGowan’s account. She was speaking out against disgraced movie mogul and convicted rapist Harvey Weinstein. She included an image that showed a private phone number in a tweet.

The president’s personal account is separate from the @POTUS handle, though, which will be passed on to Biden once he assumes office.

Before Trump, it was used by former President Obama. After Trump’s inauguration, Obama’s presidential tweets were archived and transferred over to a new handle, “@POTUS44.”

Twitter spokesman Nick Pacilio said the Trump administration’s official handles would undergo a similar archiving process before being handed off to the incoming administration.