American Airlines has banned a passenger for refusing to wear a face mask on a flight from Charlotte, N.C., to Washington, D.C.

The unmasked woman, who has not been identified, was filmed yelling at the plane’s crew and passengers in a video posted to Twitter. “If we don’t stand up it’s only going to get worse,” she’s seen shouting into the cabin onboard American Airlines flight 2198 on Sunday evening. Passengers seated in neighboring rows moved away from her during the outburst, as seen in the clip posted by Twitter user Emir Sfaxi on Sunday.

Safaxi added that the woman had also attempted to give a speech about “tyranny” during her outburst.

“Following multiple requests to comply with mandatory face-covering requirements, one passenger stood up and began yelling at flight attendants and surrounding customers,” American Airlines said in a statement. “Federal Air Marshals intervened to help deescalate and maintain control of the situation for the duration of the flight.

“The aircraft landed without further incident and was met on arrival by Metropolitan Washington Airports Authority Police,” American added. The carrier also confirmed that the customer is being placed on its internal refuse list, pending further investigation. 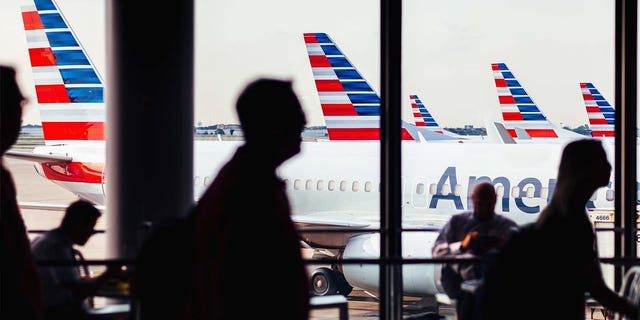 American Airlines has banned a passenger for refusing to wear a mask and causing a disturbance on a D.C.-bound flight.
(iStock)

The incident comes amid multiple other instances of passengers allegedly causing disturbances aboard American Airlines aircraft. Last week, American Airlines had even announced that it would no longer be serving alcohol on flights to or from the D.C. area “as a precautionary measure” amid rioting and protests at the U.S. Capitol.

American Airlines currently requires all passengers over the age of 2 to wear face masks and will no longer be making medical exceptions amid the coronavirus pandemic.