PHE’s Siren Study, which was carried out on healthcare workers aged under the age of 65, found that one dose of the vaccine reduced the risk of infection by 72% after three weeks, while two vaccine doses reduced the risk of infection by 85%. This high level of protection extended to the B.1.1.7 coronavirus variant first identified in the UK in December.

Health workers were tested for Covid-19 infection every two weeks using PCR tests and twice a week with lateral flow tests, Dr. Susan Hopkins, strategic response director at PHE, explained, meaning “there was a lot of asymptomatic testing,” she said.

“Overall we are seeing a really strong effect to reducing any infection: asymptomatic and symptomatic,” Hopkins said during a press conference held by the UK’s Science Media Centre on Monday.

PHE also analyzed routine testing data based on symptomatic disease in over 12,000 people, which showed that one dose of the Pfizer/BioNTech vaccine was 57% effective against symptomatic COVID-19 disease in those aged over 80 four weeks after the first dose. This increased to 88% one week after the second dose. 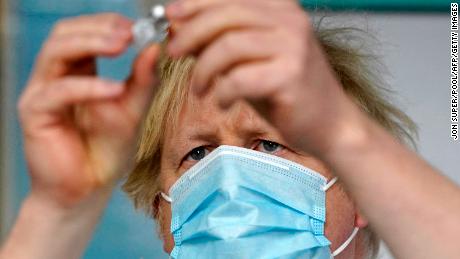 PHE predicted that protection against severe disease was likely to be over 75% in those who have received one dose of the Pfizer-BioNTech vaccine.

“The good sign is overall we are beginning to see a decline in hospitalizations and deaths in those vaccinated age groups [and] at least some is attributable to the vaccination program,” Dr. Mary Ramsay, head of immunization at PHE, said during the press conference.

She said that while the UK’s current lockdown had played a part in the decline in hospitalizations, “the faster speed in decline can be attributed in some aspects to the vaccination program.”

In the PHE release, Ramsay cautioned that despite the encouraging signs “we don’t yet know how much these vaccines will reduce the risk of you passing Covid-19 on to others,” adding that vaccinated people should continue to follow stay-at-home orders.

The UK has placed its focus on vaccinating as many high-risk people as possible with the first dose.

Ramsay said the findings “reinforce the policy of giving that single dose to more people to prevent more deaths and more admissions now and then go back later and get the second dose which will give them longer lasting protection.”

UK Health Secretary Matt Hancock said it was “extremely encouraging” that data supported the UK government’s “decision to maximize the number of people vaccinated with a single dose.”

“Protection against severe disease is at least 75% or higher and that corresponds with what you see from Scotland,” Ramsay said at the press conference in reference to early data from a Scottish study on the effect of the Pfizer and Oxford-AstraZeneca shots in the community.

In that study, also released on Monday, the Covid-19 vaccination rollout was linked to a substantial fall in the risk of admission to hospital because ot the disease in Scotland.

By the fourth week after receiving the initial dose, the Pfizer vaccine reduced the risk of hospital admission from Covid-19 by up to 85%.

The Oxford-AstraZeneca vaccine reduced the risk of hospitalization by up to 94%.

The preliminary study, which has not yet been peer reviewed, is the first to look at the two vaccines’ effect on preventing severe illness resulting in hospitalization across an entire country, with previous efficacy results coming from clinical trials.

The EAVE II project, carried out by researchers from the Universities of Edinburgh, Strathclyde, Aberdeen, Glasgow and St Andrew’s and Public Health Scotland (PHS), analyzed a dataset covering almost the entire Scottish population of 5.4 million people.

Researchers analyzed data for every week between December 8 and February 15. During this period 1.14 million vaccines were administered (some 650,000 people got the Pfizer shot and about 490,000 had the Oxford-AstraZeneca one) with 21 per cent of the Scottish population receiving a first dose, according to a University of Edinburgh press release.

Among those aged 80 years and over — one of the highest risk groups — vaccination was associated with an 81 per cent reduction in hospitalization risk from Covid-19 in the fourth week, when the results for both vaccines were combined, according to the press release.

“These results are very encouraging and have given us great reasons to be optimistic for the future. We now have national evidence — across an entire country — that vaccination provides protection against Covid-19 hospitalizations,” lead researcher Aziz Sheikh, Director of the University of Edinburgh’s Usher Institute, said in the release.

“Roll-out of the first vaccine dose now needs to be accelerated globally to help overcome this terrible disease.”

Arne Akbar, president of the British Society for Immunology, added: “We now need to understand how long lasting this protection is for one dose of the vaccine.”

“Although further research is needed, overall these new findings should provide reassurance around the UK’s decision to offer the two doses of the vaccine 12 weeks apart.”

Jason Sudeikis Talks About His…