An employee of the Boulder, Colorado, supermarket where a gunman killed 10 people watched as the assailant opened fire and narrowly escaped his notice while joining with other bystanders in a desperate scramble to get away.

Emily Giffen, 27, was smoking outside the store Monday during a break when she heard multiple loud pops that she knew were not fireworks. She said she saw a man running across an intersection suddenly fall over and another man approach him in a crouch and fire several rounds at close range.

“I don’t know how he didn’t see us,” she said of the attacker, who walked right by her before she ran into the King Soopers store and out the back. Newly fallen snow made people trip and slip as they tried to escape, she said, showing a large bruise on her arm that she said happened when someone stepped on her.

“I just really am having a hard time understanding why me and my friends deserve to die,” she said, wondering why the gunman chose to target the Boulder store specifically. “It doesn’t seem personal, so I don’t quite get why we pulled that lottery ticket.”

Giffen made the comments Wednesday in an interview with The Associated Press as families mourned the dead and multiple law enforcement agencies pressed ahead with what they said would be a monthslong investigation. Officials hadn’t released new details on that investigation by late Wednesday.

The 21-year-old suspect, Ahmad Al Aliwi Alissa, was in jail and made his first court appearance Thursday on murder charges. No lawyer was listed for Alissa in court records. 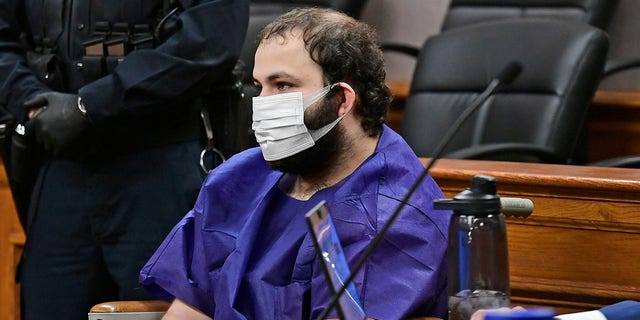 More than 500 people bundled in masks and wool hats attended a downtown candlelight vigil Wednesday night to mourn the victims. They observed a moment of silence; violins soothed the crowd; and a woman sang “Ave Maria” as candle flames flickered in the crisp air.

Other community vigils were planned to honor the victims. The Boulder Police Department invited the public to show support for Officer Eric Talley, who was killed, by witnessing a police procession Wednesday as his body was taken from the coroner’s office to a funeral home in the Denver suburb of Aurora.

Red and blue lights flashed along a parkway as dozens of officers from Boulder and neighboring departments stood at attention. When the hearse passed, the officers saluted as one shouted, “Attention!” One person held an American flag.

Talley, 51, was the first officer to arrive at the scene. He had seven children, ages 7 to 20.

Olds, Leiker and Stong worked at the supermarket.

Kim Cordova, president of the United Food and Commercial Workers Local 7, which represents more than 30 store employees, said they did their best to get customers to safety.

“They grabbed everybody they could, and they brought them to the backroom or to other areas of the store to hide, or got them out through the back dock,” Cordova said.

On Facebook posts and in an interview, Giffen said her friends deserved better, not to die at work while doing their jobs.

“This guy, he went hunting in a barrel full of fish. Nobody was prepared to fight back. No one was even prepared to hide,” she said. “It’s just the fear like, where do you, where do I ever feel safe?”

Giffen, who said she has worked at the King Soopers for three years, described a close-knit community where she chats with customers and remembers their bagel orders from when she worked at a nearby bagel place. 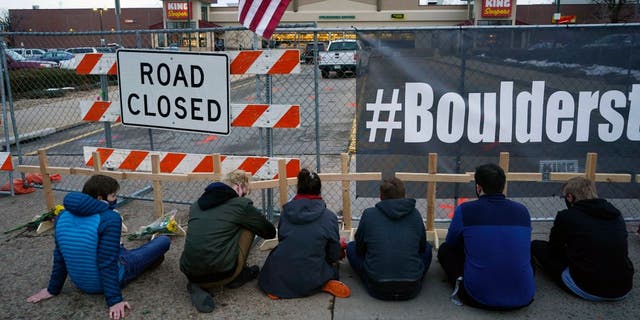 Friends sit with Star Samkus, center, who works at the King Soopers grocery store where a mass shooting took place a day earlier, by crosses placed for the victim.
(AP Photo/David Zalubowski)

On the neighborhood-based social media app Nextdoor, Giffen watched as people asked about her co-workers by name, listing them one by one to find out if they were all right.

“It was so beautiful to see all of these people who live right here with me actually acknowledge individual people’s names,” she said. “They don’t just know us as their employees. We’re a part of their community.”

The attack was the nation’s deadliest mass shooting since a 2019 assault on a Walmart in El Paso, Texas, where a gunman killed 22 people. It was also the seventh mass killing this year in the U.S., following the March 16 shooting that left eight people dead at three Atlanta-area massage businesses, according to a database compiled by the AP, USA Today and Northeastern University.

It follows a lull in mass killings last year during the pandemic.

The Colorado suspect bought a Ruger AR-556 pistol — which resembles an AR-15 rifle with a slightly shorter stock — on March 16, six days before the attack, according to an arrest affidavit.

Authorities have not disclosed where the gun was purchased.

According to two law enforcement officials, Alissa was born in Syria in 1999, emigrated to the U.S. as a toddler and later became a U.S. citizen. He would need to be a citizen to buy a gun. The officials were not authorized to speak publicly and spoke to AP on condition of anonymity.

An AR-15-style gun was recovered inside the supermarket and was believed to have been used in the attack, said a law enforcement official briefed on the shooting who was not authorized to speak publicly and spoke to the AP on condition of anonymity.

The law enforcement official said the suspect’s family told investigators that he had delusions and that they believed he had some type of mental illness. The relatives described times when Alissa told them people were following or chasing him, which they said may have contributed to the violence, the official said.