In this March 31, 2019, photo, women speak to guards at the gate that closes off the section for foreign families who lived in the Islamic State’s so-called caliphate, at al-Hol camp in Hasakeh province, Syria. 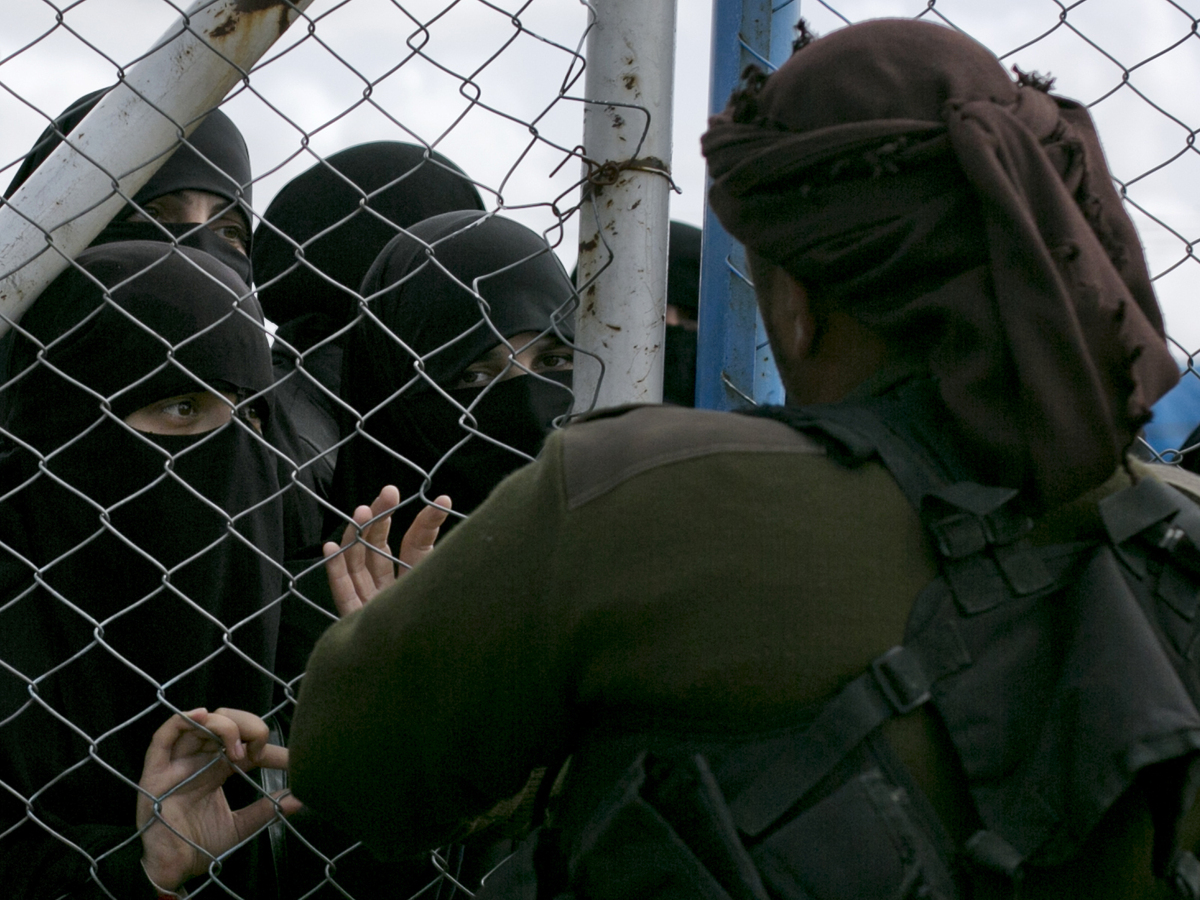 In this March 31, 2019, photo, women speak to guards at the gate that closes off the section for foreign families who lived in the Islamic State’s so-called caliphate, at al-Hol camp in Hasakeh province, Syria.

With her two young children in tow, 26-year-old Suhayra Aden, a former wife to ISIS fighters, took off across the Syrian desert last month toward Turkey, according to news reports.

They wouldn’t get far.

Turkish border guards detained Aden, who appeared on an Interpol “blue notice” to seek information about her suspected ISIS activities, according to the Turkish Defense Ministry. The government didn’t pursue charges against her and sought to deport her and her two kids, Radio New Zealand reported.

Aden claimed to be a dual citizen of Australia and New Zealand. But Australia revoked her citizenship and canceled her passport. And New Zealand has resisted taking her.

Now Aden and young children — ages 2 and 5, according to Australia’s ABC News — remain stuck in Turkey. Their situation has sparked a diplomatic dispute between Australia and New Zealand, and highlights a long-running dilemma of what to do with citizens who left to live under ISIS.

A spokesperson from New Zealand’s Foreign Ministry told NPR the government is providing “consular assistance” to Aden while she is in Turkey.

New Zealand’s Prime Minister Jacinda Ardern has maintained that any responsibility for repatriating the woman lies firmly with Australia.

“It is wrong that New Zealand should shoulder the responsibility for a situation involving a woman who has not lived in New Zealand since she was 6, has resided in Australia since that time, has her family in Australia and left for Syria from Australia on her Australian passport,” Ardern said in February.

If the country denies them entry, it’s likely Aden and her kids would be rendered essentially stateless.

Their dilemma is not a unique one. There are thousands of foreign women who traveled overseas to join ISIS years ago — many of whom are languishing, often with young children, in detention in Syria. Meanwhile, authorities in their home country put off dealing with them, even two years after many first arrived at the displacement camps.

Nations including the United Kingdom, Australia, France and Canada in particular, experts say, have snatched away the welcome mat to these women. They’ve ceded responsibility of repatriation to another nation if possible or canceled their citizenship, citing national security concerns. This is despite the fact that many women have not been charged or imprisoned for any crimes or alleged terrorist actions while in ISIS.

By comparison, the United States, Russia, Germany, Finland, Bosnia, Albania, Uzbekistan, Kazakhstan and others have repatriated dozens of children and their mothers who are considered the wives of ISIS fighters.

Maya Foa, the director of Reprieve, a human rights advocacy group based in the U.K., says that governments refusing to repatriate nationals are “abdicating their responsibilities” to their citizens.

“They are being indefinitely held without charge or trial in tortuous conditions,” she says. “And the governments are not proposing a solution.”

Aden left her family in Australia in 2014 to travel to Turkey with the goal of joining ISIS in Syria, according to Australia’s ABC Investigations reporter Dylan Welch, who interviewed her while reporting at the al-Hol camp in Syria. Why she chose to leave or how exactly she managed to travel there is unclear.

ISIS fighters have effectively used social media to manipulate and recruit many young women and girls from around the world to join the group, according to Letta Tayler, associate director of crisis and conflict division with Human Rights Watch.

Aden told Welch she regretted her decision as she approached the Syrian border from Turkey. She said she tried unsuccessfully to call her mother wishing to return home. The group she was with wouldn’t let her leave. According to Welch, she would go on to marry two Swedish ISIS fighters and to have three children in five years. Her two husbands and one child died. It’s unclear what role, if any, Aden may have had in ISIS.

After ISIS lost control of its last strongholds in Syria in 2019, the population at the al-Hol camp in the northeastern part of the country, where Aden would end up, swelled by 680% to more than 70,000 people, according to a U.S. Defense Department inspector general report.

Today there are more than 60,000 people living in al-Hol, with conditions continuing to deteriorate, and 10,000 of them are from countries other than Syria or Iraq, according to United Nations figures. Most of them are women and children.

“Conditions can amount to torture”

Tayler traveled to al-Hol in July 2019 where she saw firsthand what conditions detainees are living in.

“I saw worms in the water that children were using to fill up their water bottles,” she says.

Aid organizations said the coronavirus pandemic has made the conditions worse. “They don’t have access to clean water or adequate food. Recent examples of violence and fears of a mass COVID-19 outbreak only add to their suffering,” says Save the Children’s Syria Response Director Sonia Khush. In this March 31, 2019 file photo, children play in a mud puddle in the section for foreign families at al-Hol camp in Hasakeh province, Syria. 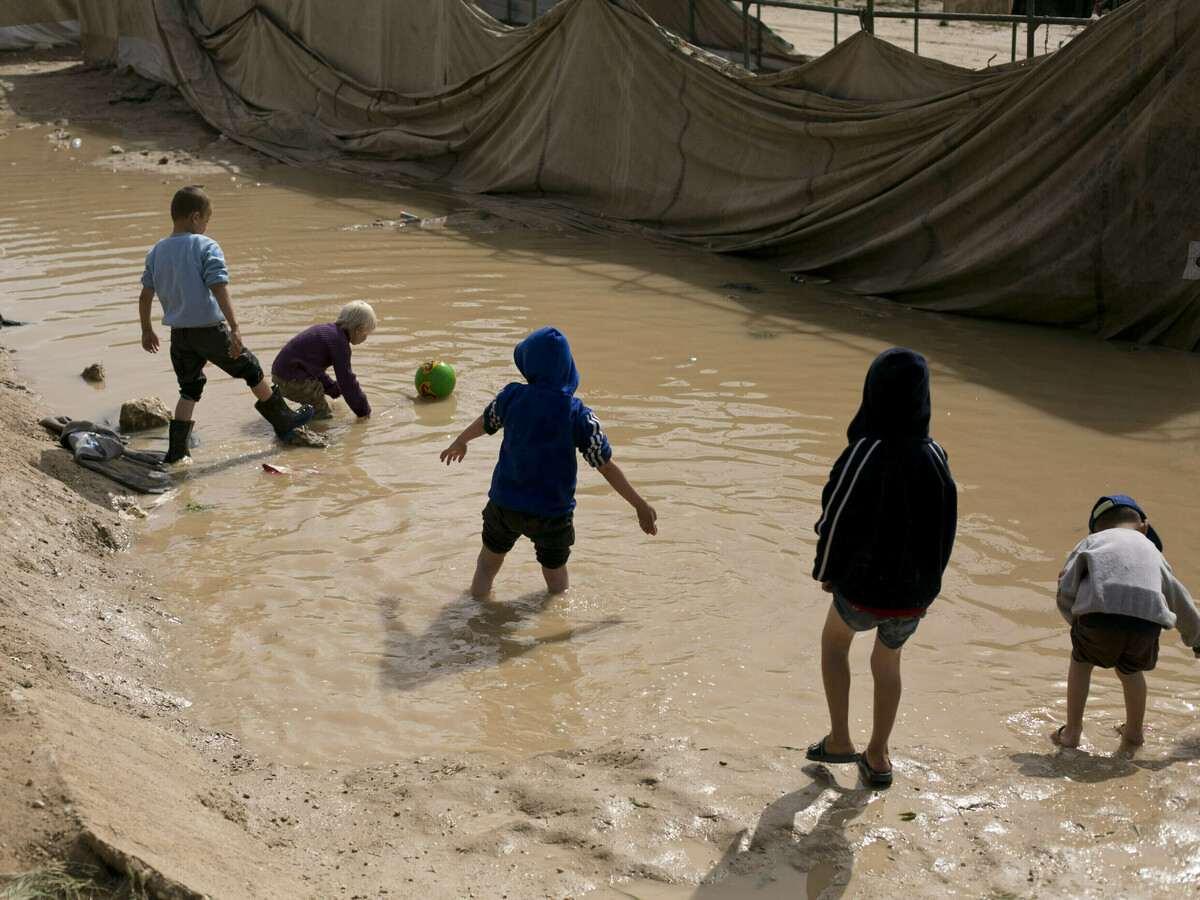 In this March 31, 2019 file photo, children play in a mud puddle in the section for foreign families at al-Hol camp in Hasakeh province, Syria.

Inhabitants also fear threats of violence from external forces and ISIS supporters within the camps, according to the Defense Department report.

Tayler says simply, “These conditions can amount to torture.”

Point of no return

The report says while al-Hol detainees “are civilians who have not been charged with any crime, some residents are suspected family members of ISIS fighters and are loyal to ISIS.”

But it also says not repatriating these citizens actually poses a greater threat to the campaign to defeat ISIS than not bringing them home. It says “the only viable solution is that their countries of origin take them back.”

Governments have a constitutional duty to bring the women and children back home and to apply due process, Foa and Tayler say. That means, investigating any crimes and to protect citizens detained overseas.

“What we are not saying is: Trials can’t happen. They absolutely should,” Foa says.

Australia’s Prime Minister Scott Morrison said last month the country would not repatriate Aden because his job is “to put Australia’s national security interests first. He said Australians “do not want to see terrorists who fought with terrorism organizations enjoying privileges of citizenship.”

Australia has come under criticism for stripping her citizenship without evaluating her case.

The country’s counterterrorism law says it can revoke citizenship to Australian dual nationals without a hearing.

Australia has revoked citizenship from 20 other people, according to the think tank the Lowy Institute. There are believed to be at least 80 men, women and children who can claim Australian citizenship in Syria, according to Human Rights Watch.

The U.K. has used similar laws to justify actions in the well-known case of Shamima Begum, who left London in 2015 to join ISIS. Officials revoked her British citizenship two years ago, also citing security concerns. The British Nationality Act of 1981 gave the government cover as it allows officials to strip Britons of their citizenship if it would be “conducive to the public good” and if the person wouldn’t become stateless as a result.

The United States, despite saying it repatriated all American supporters of ISIS known to be held in Syria, has denied entry to U.S.-born Hoda Muthana whose citizenship is in dispute.

In November 2019, a federal judge ruled that Muthana, who was a college student when she traveled to Syria, is not a citizen and has no legal basis for a U.S. passport. The decision is being challenged by her family.

Families can and do challenge citizenship revocation or refusal to repatriate citizens in court, with varying results. They often pointed to several international agreements to make their case.

The 1961 Convention on the Reduction of Statelessness affords certain rights to people who lack citizenship to any country and seeks to prevent statelessness.

The International Covenant on Civil and Political Rights recognizes the right to acquire a nationality. It ordains “no one may be deprived of the right to enter the territory of the state of which he is a national.”

Two years ago, in a rare case of success, a German family won their challenge to Germany’s refusal to repatriate a woman along with her three children who were detained in al-Hol camp. The Higher Administrative Court of Berlin-Brandenburg said the family had a right to return home in accordance with the international covenant and the European Convention of Human Rights. The court also ruled the state had a duty to protect the whole family.

But the Begum case was dealt a blow last month when the U.K. Supreme Court ruled she can’t return to Britain while she fights to restore her citizenship.

“Enforcement is extremely hard in the international domain,” Foa says, and it’s almost impossible to hold countries accountable to these agreements.

She says what the difficulty of enforcing international law in most cases “really tells us is that this issue is not being litigated in the court of law.”