Pizza Hut is redesigning thousands of its restaurants to make it easier – and safer — for customers to order digitally and grab their pies and go.

The Plano, Texas-based chain announced Tuesday the introduction of a “Hut Lane” at more than 1,500 locations across the country, specifically dedicated to digital order pickups. The redesign comes after the restaurant chain began offering contactless curbside pickup last year during the pandemic as a way to curb the spread of the virus. 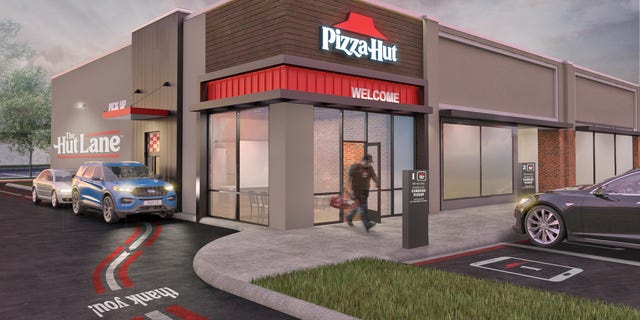 The Hut Lane will allow customers to pick up orders placed in advance via the Pizza Hut app and PizzaHut.com. Patrons can later pull up to the window and grab their order without ever having to leave the car.

Pizza Hut joins a number of fast-food restaurants that have optimized restaurants in the “contactless” age. Taco Bell, owned by Pizza Hut parent company Yum! Brands, last summer announced its “Go Mobile” concept, a new digital restaurant with a smaller 1,325-square-foot footprint. The restaurants, which are geared toward customers who order online or throught the Taco Bell app, are expected to open this year.

Other competitors like Shake Shack will also debut drive-thru options next year, and Chipotle has plans to increase its drive-thru presence at restaurants as well.

“We are giving our customers a variety of options to optimize their pizza-eating experience as we build on our business momentum,” Nicolas Burquier, chief customer and operations officer for Pizza Hut, said in a statement.

“Not only do we offer industry-leading, innovative menu items that are only available at Pizza Hut, we also offer several digital-first pick-up options for our customers, and The Hut Lane is a great example of that,” he added.

Yum! Brands, which also owns Taco Bell and KFC, announced earlier this month that its restaurants will also start taking orders via text message and on social media after acquiring an Israeli tech startup.