Ultra-Orthodox Jews look at the scene where dozens of people were killed and some 150 injured in a stampede during the Lag BaOmer festival at Mount Meron in northern Israel on Friday. 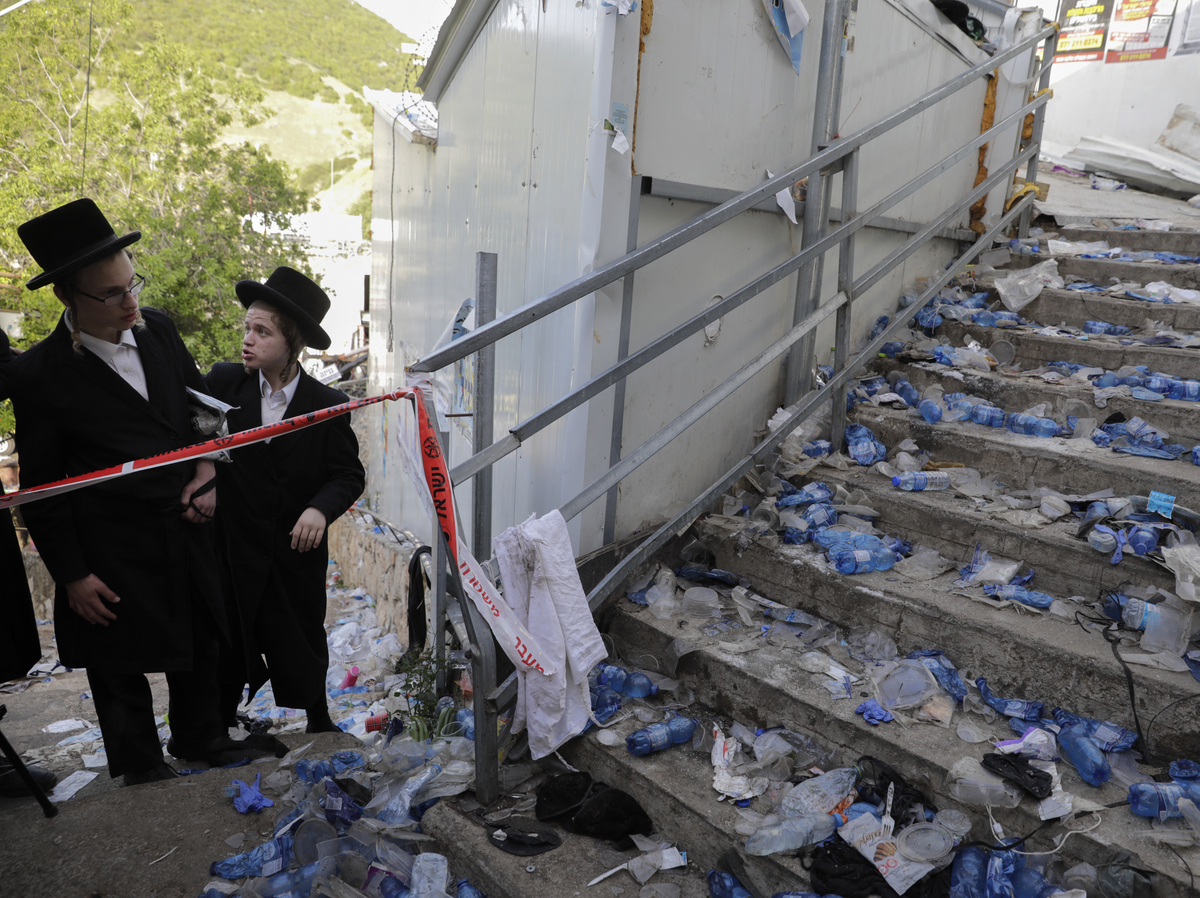 Ultra-Orthodox Jews look at the scene where dozens of people were killed and some 150 injured in a stampede during the Lag BaOmer festival at Mount Meron in northern Israel on Friday.

JERUSALEM — At least 45 people were killed and some 150 more injured in a crush at a religious festival of ultra-Orthodox Jews in northern Israel, where tens of thousands of faithful had convened in one of the country’s largest events since the pandemic began.

The chaos at Mount Meron began early Friday at the festival of Lag BaOmer, which features bonfires and dancing around the Galilee tomb of a 2nd century rabbi.

According to witnesses, at around 1 a.m. local time, in an area of the complex where the ultra-Orthodox Hasidic community of Toldos Aharon was holding its celebration, participants were pushing through a slippery staircase. Suddenly, a row of people fell to the floor, piling atop of one another.

Witnesses said people were asphyxiated or trampled in the tightly packed corridor. The stampede occurred in the men’s section of the gender-segregated festival, Reuters reported, quoting medics, who said that casualties included children.

Officials had limited the number of bonfires at the site this year in an attempt to control crowds because of COVID-19 concerns.

“There weren’t a lot of bonfires this year, and I believe that’s why everyone came all at once,” said a young survivor, identified as Avraham, speaking to Israeli Channel 12 television from his hospital bed.

Hezi Levi, the director general of Israel’s Ministry of Health, told NPR that he was concerned about a potential virus outbreak because of the large crowds.

“I expressed yesterday my concern of gathering together of hundreds of thousands of people who are coming to celebrate the Lag BaOmer, and we spoke about a scenario that might be very dangerous regarding corona,” Levi said. “We are not sure that everybody is vaccinated. We know children under 16 years old are not vaccinated. And it’s very dangerous to transfer the disease.”

Despite warnings from Israeli health officials, local media estimated the crowd at this year’s festival at around 100,000 people.

Another witness told Haaretz newspaper, “It happened in a split second; people just fell, trampling each other. It was a disaster.”

Rescue officials put the death toll at 45. Zaki Heller, a spokesman for the Magen David Adom rescue service, said 150 people had been hurt in the stampede, six of them were in critical condition.

Authorities struggled to identify the dead, asking families to bring medical records and photographs of their relatives to Israel’s central morgue.

Relatives continued to search for their missing loved ones Friday morning, after buses evacuated crowds from the site overnight and cellphone service collapsed in the area. Israelis posted photos of their relatives, and the Israeli president’s office set up an emergency hotline to help families searching for missing relatives.

Families of those who died in the stampede are racing to bury the dead before sundown Friday, the start of the Jewish Sabbath when burials do not take place. Israeli Prime Minister Benjamin Netanyahu visits the site of an overnight stampede during an ultra-Orthodox religious gathering in the northern Israeli town of Meron, on Friday. 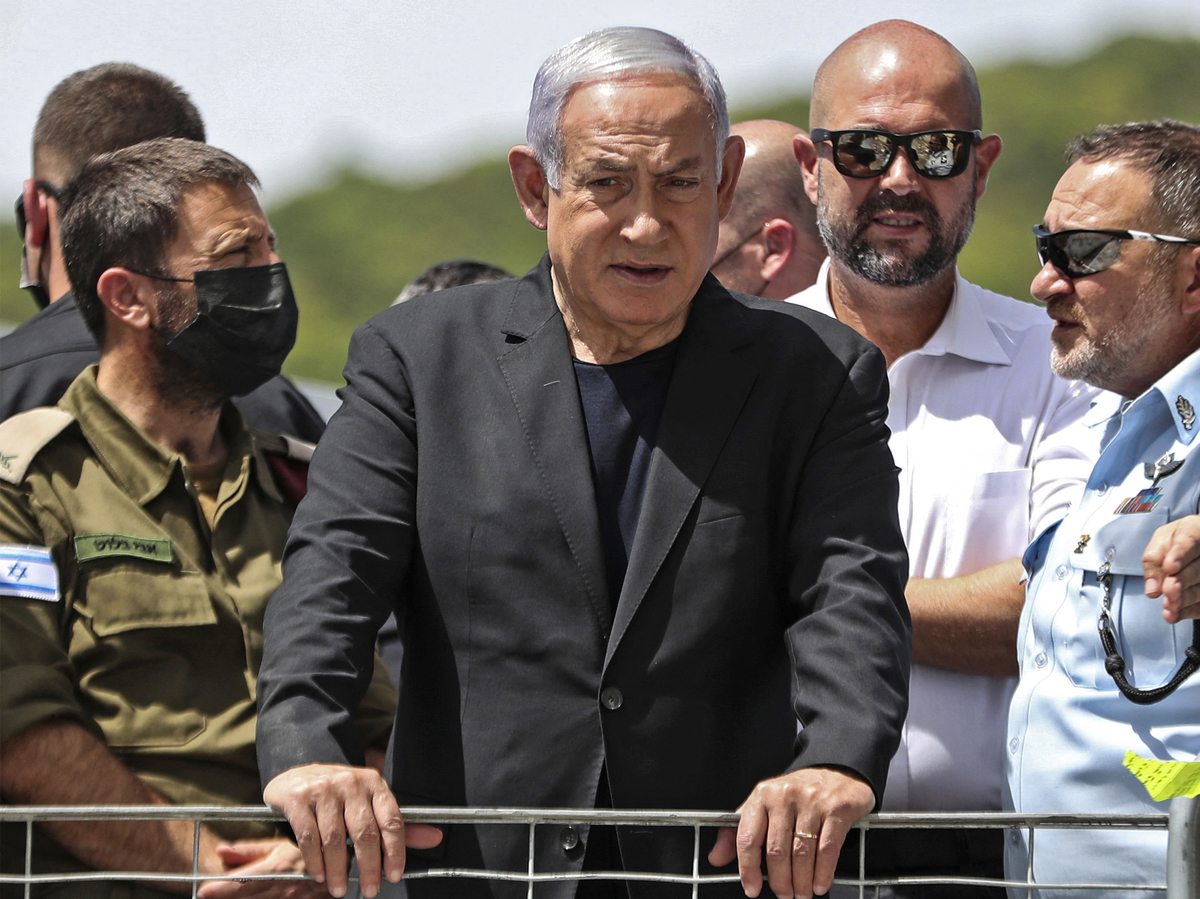 Israeli Prime Minister Benjamin Netanyahu visits the site of an overnight stampede during an ultra-Orthodox religious gathering in the northern Israeli town of Meron, on Friday.

Prime Minister Benjamin Netanyahu, who briefly visited Mount Meron around midday Friday, called the tragedy “one of the worst disasters that has befallen the state of Israel.” He said Sunday would be a day of national mourning.

The death toll is similar to number of people killed in a 2010 forest fire, which has been regarded as Israel’s deadliest civilian tragedy, according to The Associated Press.

The Israeli Foreign Ministry said Israel received an outpouring of condolences from Russian President Vladimir Putin, British Prime Minister Boris Johnson, and representatives of about a dozen other countries, including the Gulf Arab kingdom of Bahrain, which established diplomatic ties with Israel last year.

One act of kindness caught local media attention: Despite the Muslim fast for Ramadan, residents of a Palestinian Arab town in the area set up food and drink for Jewish participants evacuating the pilgrimage site.