As Israel continues its world-leading vaccination campaign, just 13 new coronavirus cases were diagnosed in the country on Saturday, the lowest rate in 14 months, according to Health Ministry data released Sunday.

According to the ministry, a total of 9,238 coronavirus tests were conducted Saturday, with 0.1 percent returning positive. While weekend numbers are generally significantly lower due to reduced testing, the new figures still represent a relative drop, with last weekend’s positivity rate at 0.5%.

Of the 1,310 active cases in the country, there were 100 serious cases, including 60 people on ventilators, the Health Ministry data showed. The death toll stands at 6,366.


As infections have dwindled, Israel has rolled back restrictions on public life, including lifting the requirement to wear face masks outdoors, which ended last month. 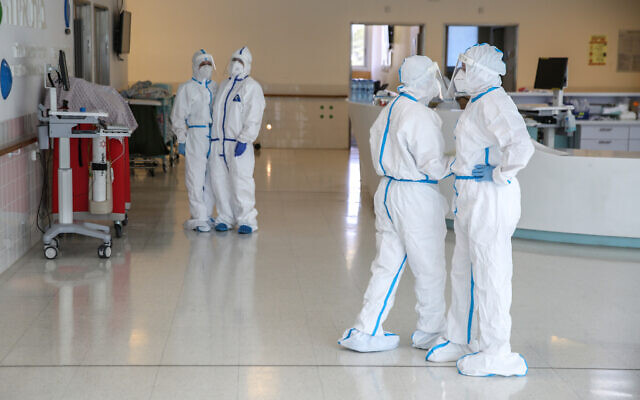 With its aggressive vaccination drive, Israel has seen a sharp drop in daily mortality and infection rates since the pandemic peaked in late January.

Late last month, the Jewish state passed the milestone of over 5 million people having received both vaccine shots.

According to the Health Ministry on Sunday, 5,049,828 second doses were now in Israeli arms, accounting for over 60% of the total population and more than 80% of the eligible population over the age of 16. A total of 5,401,155 people have received at least one shot.

Israel’s vaccination program, which is based on the Pfizer-BioNtech two-shot vaccine, has seen it maintain the highest per capita inoculation rate in the world since it began in late December.

The country is preparing to start vaccinating children aged 12-15 as soon as the US Food and Drug Administration approves vaccine use for children in that age bracket. 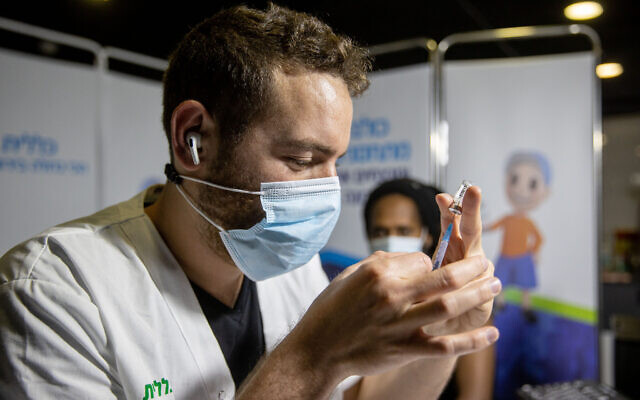 A health worker prepares a COVID-19 vaccine shot at a vaccination center in Jerusalem, on March 11, 2021. (Yonatan Sindel/Flash90)

Earlier Sunday, the Israel Defense Forces declared itself coronavirus-free, as it recorded zero active cases of the disease among its ranks for the first time since the outbreak of the virus.

The military reported its first coronavirus case on March 2, 2020, when a soldier who worked part-time at a toy store tested positive for the disease. The number of conscripts, career officers, and civilian employees of the IDF diagnosed with the disease has risen and fallen in the interim 14 months, reaching a peak in February, with over 3,000 cases.

In March, the military declared that it had reached “herd immunity” from the disease as more than 80% of all servicemembers had been vaccinated or had recovered from the coronavirus.

I’m proud to work at The Times of Israel

I’ll tell you the truth: Life here in Israel isn’t always easy. But it’s full of beauty and meaning.

I’m proud to work at The Times of Israel alongside colleagues who pour their hearts into their work day in, day out, to capture the complexity of this extraordinary place.

I believe our reporting sets an important tone of honesty and decency that’s essential to understand what’s really happening in Israel. It takes a lot of time, commitment and hard work from our team to get this right.

Your support, through membership in The Times of Israel Community, enables us to continue our work. Would you join our Community today?

Join the Times of Israel Community

You’re serious. We appreciate that!

We’re really pleased that you’ve read X Times of Israel articles in the past month.

That’s why we come to work every day – to provide discerning readers like you with must-read coverage of Israel and the Jewish world.

So now we have a request. Unlike other news outlets, we haven’t put up a paywall. But as the journalism we do is costly, we invite readers for whom The Times of Israel has become important to help support our work by joining The Times of Israel Community.

For as little as $6 a month you can help support our quality journalism while enjoying The Times of Israel AD-FREE, as well as accessing exclusive content available only to Times of Israel Community members.

Four hostages freed, but standoff…
Over 1100% Surge In Bitcoin…