The Amazon acquisition of MGM Studios may mean a potentially uncomfortable situation for former President Donald Trump thanks to alleged outtakes from “The Apprentice” now being in the hands of Amazon founder Jeff Bezos.

With Amazon poised to acquire the legendary film studio, it means that the corporate giant – which boasts Bezos as its largest individual shareholder – would own the rights to the back catalog of the reality TV series that saw the former president put potential employees and celebrities through various tests to determine who would be granted his apprentice in the business world.

MGM gained control of the series in 2014 when it bought a majority interest in One Three Media, the company then run by Mark Burnett who produced “The Apprentice,” Survivor” and several other reality show hits. Following the sale, MGM named Burnett the head of its newly revived United Artists Media Group. The following year, Burnett sold the remaining 45% of One Three Media to MGM and became head of the studio’s worldwide TV group and a power broker at the studio.

In light of Amazon’s acquisition of MGM, some are speculating that Bezos may leave the company – he is stepping down as Amazon’s CEO on July 5 – with a treasure trove of dirt on the former president.

Bezos was a frequent target of Trump during his presidency, which could come back to bite him now that the Amazon billionaire could control the release of outtakes and behind-the-scenes footage from the reality series that some, such as actor Tom Arnold, allege shows Trump making various lewd, demeaning and sexist language while on set and pointing out which contestants he would like to have sex with. 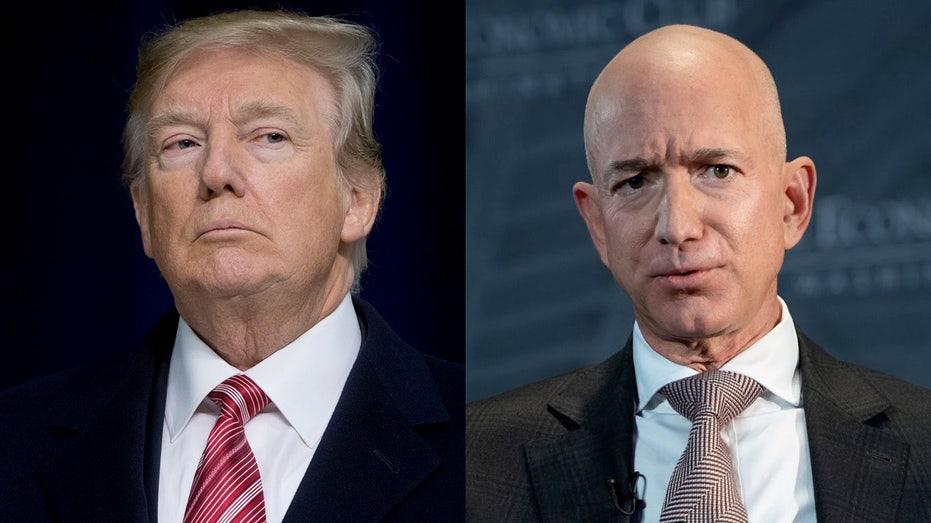 The Amazon acquisition of MGM may mean a potentially uncomfortable situation for former President Donald Trump thanks to alleged outtakes from ‘The Apprentice’ now being in the hands of Jeff Bezos. (Getty Images)

Although MGM owned the rights prior to the Amazon acquisition, it previously explained to The Associated Press that it still faced legal hurdles with the content, and therefore could not release it to the public.

MGM attorney Marvin S. Putnam said in a statement to the AP in 2016 that such agreements “typically contain provisions related to confidentiality and artists’ rights.” While those agreements were negotiated by Burnett’s company, as owner of that company, he said MGM would honor those rights.

In a joint statement at the time, Burnett hoped to quell criticism that was protecting Trump on the campaign trail from potentially damaging footage. He noted that MGM owns the rights and he is not in a position to unilaterally release anything.

In a statement to FOX Business on Thursday, a rep for MGM reiterated the same statement from years ago, noting: “MGM Studios owns The Apprentice and all its materials, including all footage.  While MGM owns all footage, various contractual and legal requirements restrict MGM’s ability to release such material.”

The question now is whether or not Amazon Studios will be tied up with similar restrictions?

Representatives for Amazon had no comment when reached by Fox Business.

France Recalls Ambassadors to the…