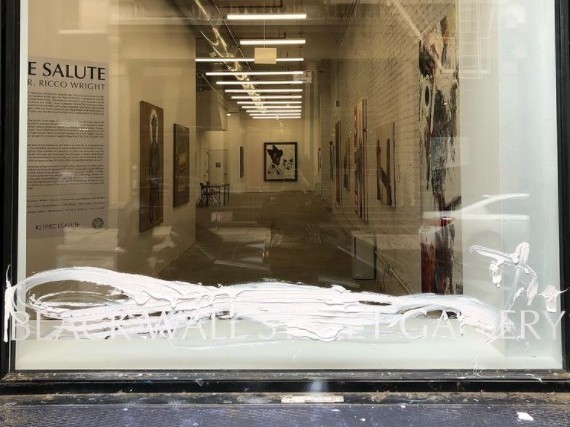 The owner of Black Wall Street Gallery in New York City said the building’s facade has been vandalized.

A New York City art gallery featuring tributes to those who were killed in the Tulsa Race Massacre of 1921 was vandalized with white paint in what owners have described as hate speech.

Black Wall Street Gallery in SoHo said in an Instagram post that either late Sunday or early Monday morning, someone smeared white paint on the gallery’s glass facade, covering up its name.

Detective Denise Moroney, a New York City Police Department spokesperson, said in a statement that no arrests have been made in the investigation and that the Hate Crime Task Force was notified. The gallery said police initially did not appear to believe the vandalism constituted hate speech.

“As far as we’re concerned, smearing white paint on the word ‘black’ is deliberate and intentional and therefore constitutes hate speech. We’re pushing for this to be documented as such,” the gallery’s Instagram post read. “And yet, the police did inform us that if a noose were hanging on our door, then they’d consider the incident hate speech.”

Reached by phone, gallery owner Ricco Wright said that there was even more white paint on the gallery’s front windows Tuesday morning and that someone had also left pictures that Wright couldn’t identify.

“This is a literal whitewashing of Black Wall Street,” he said.

The initial incident took place on the 100th anniversary of the Tulsa Race Massacre, in which an armed white mob killed as many as 300 Black residents and razed buildings over two days of violence in a thriving neighborhood known as Black Wall Street.

The gallery is currently hosting an exhibition called “21 Piece Salute,” which brought in 21 artists from around the world with the goal of “honoring those who lost their lives and livelihoods in the 1921 Tulsa Race Massacre and celebrating Black entrepreneurship as we look toward the next 100 years.”

The Instagram post said the gallery, which maintains a second location in Tulsa, Okla., has been operating in the SoHo neighborhood without incident since October.