Latest News
Home /40 years ago, the first cases of AIDS were reported in the US – CNN

It was the first time that acquired immunodeficiency syndrome (AIDS) — the devastating advanced-stage of HIV infection that would go on to claim the lives of more than 32 million people globally — was reported in the US.

Saturday marks the 40th anniversary of the nation’s first reported cases of AIDS. More than 700,000 people in the US have died of the disease since then — and though medical advancements have drastically changed the prognosis for HIV/AIDS patients, there remains to this day no cure.

Here’s a look back at how the AIDS epidemic unfolded.

The early years of the AIDS epidemic were an uncertain and unsettling time.

LGBTQ communities were losing friends and loved ones to the disease, one after another — with little idea as to how or why. All the while, it seemed society had turned a blind eye.

“Can you imagine what it must be like if you had lost 20 of your friends in the last 18 months?” Larry Kramer, famed AIDS activist and co-founder of the Gay Men’s Health Crisis, said in a
1983 interview with the “Today” show.

“No cause, no cure, people in hospitals. It’s a very angry community.” 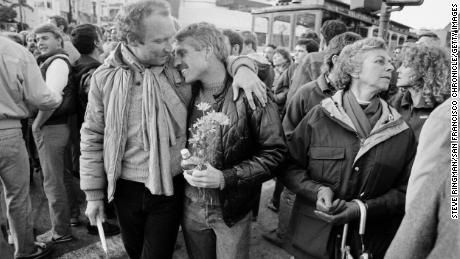 President Ronald Reagan’s administration paid little attention to the epidemic, with four years going by before Reagan made a public mention of AIDS.

Exchanges between
Reagan’s press secretary and reporters in 1982 and 1983 indicate that the nation’s top officials and mainstream society viewed the disease as a joke, and not an issue of great concern.
That stemmed from the perception of AIDS as a
“gay plague” — a condition thought to be tied to the lifestyles and behaviors of gay men, even though cases had also been reported in women, infants, those with hemophilia and people who injected drugs.
In a recently published interview with the
New England Journal of Medicine, AIDS researcher Alexandra Levine spoke of “the horror of watching as society as a whole turned its back on this suffering, the horror of watching as many of my own colleagues refused to help, refused to care, refused to act as the professionals they were supposed to be.” 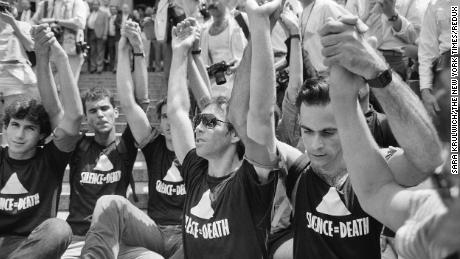 As politicians and government entities proved slow to act, activists
took matters into their own hands, doing what they could to combat homophobia and stigma and make sure their communities received the public health information they needed.
Among those efforts was the 1982 pamphlet titled, ”
How to Have Sex in an Epidemic: One Approach.”
Created by Michael Callen and Richard Berkowitz, it was one of the first times that gay men were advised to use condoms during sex with other men, according to an exhibit by the
National Library of Medicine. Though the two are widely considered to be
pioneers of safe sex, many in the gay community at the time criticized their work as “sex negative.”
Black gay and lesbian organizations, meanwhile, fought back through
poster campaigns against misconceptions that AIDS primarily affected White gay men.

In the early ’80s, HIV/AIDS was considered a
death sentence.
Scientists and physicians
were struggling to understand what caused the disease and how it spread — making the process of finding a treatment all the more challenging.

Dr. Anthony Fauci, who became director of the National Institute of Allergy and Infectious Diseases at the height of the AIDS epidemic, refers to that period of his career as the “dark years.”

“I went from a person who was seeing patients with other diseases and developing cures and adequate therapies for them in the early part of my career, to every day taking care of people who inevitably were going to die, usually within a short period of time,” he said in a recent interview with CNN. 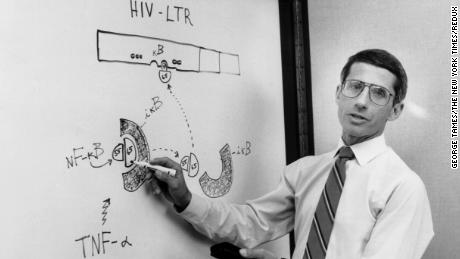 It was an experience shared by many clinicians who cared for early AIDS patients: Feeling as though there was nothing they could do to stop the suffering.

“You were really putting Band-Aids on hemorrhages for a while,” Fauci added.

In the absence of viable treatments, Gerald Friedland, who worked on early AIDS cases at Montefiore Medical Center in the Bronx, recalled how he focused on empathy.

“The onslaught of death and dying of young men and women was beyond ‘usual professional commitments’ and terribly hard,” he said in a recently published interview with the
New England Journal of Medicine. “But I learned how to become skilled at providing people with a ‘decent death.'”

The tide started to turn in the late ’80s and ’90s, as more effective therapies became available and transformed what it meant for an individual to live with HIV.

On March 19, 1987, the Food and Drug Administration approved an
antiretroviral drug known as AZT to treat HIV infection.

After pressure from activists fighting for their community’s survival, the FDA
issued new regulations around clinical drug trials — making it possible for patients to access experimental, potentially life-saving therapies without having to wait years for official agency approval. 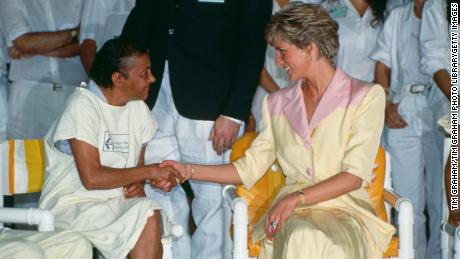 By the late ’80s and ’90s, public perception of HIV/AIDS was also starting to shift — thanks in part to high-profile activists and celebrities.

One of those activists was
Ryan White, an Indiana teenager who contracted AIDS in 1984 through contaminated needles while being treated for hemophilia. He experienced discrimination in his community after his diagnosis, even being denied entry to his middle school. As White spoke publicly about his experiences and his family challenged his treatment in court, he became one of the early public faces of the disease.

Princess Diana was also instrumental in shattering stigmas and myths around the illness, famously photographed visiting HIV/AIDS patients in hospital wards and shaking hands with them without gloves.

And in 1991, NBA star Earvin “Magic” Johnson revealed he had been diagnosed with HIV — his identity as a straight, Black man helped demonstrate that anyone could contract the disease. 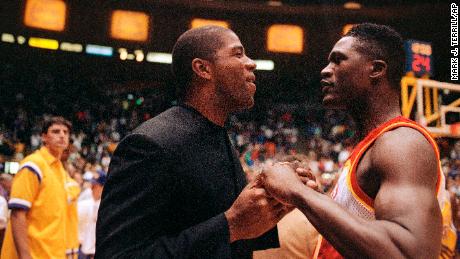 Another scientific breakthrough came in 1996, when the FDA approved the first
protease inhibitors. That development brought into use what’s known as
highly active antiretroviral therapy (HAART), turning HIV/AIDS from a fatal diagnosis to a controllable condition.

“We now are giving drugs to people who are living with HIV — not only do these save their lives and give them essentially a normal lifespan, but you can prevent them from infecting other people,” Fauci told CNN on June 1.

Richard Chaisson, a physician who helped lead the fight against AIDS at Johns Hopkins University Hospital in the late ’80s and ’90s, described the feeling to the New England Journal of Medicine.

“Desperation changed to hope. Hope changed to belief, and belief changed to joy,” he recalled. “So many patients returned home from the ship of the doomed and went back to living near-normal lives.” 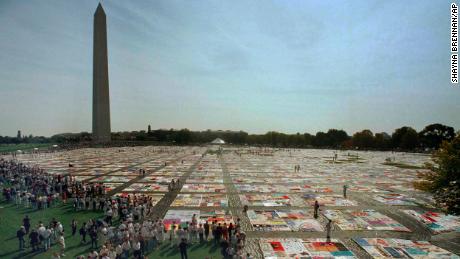 In 2010, researchers announced yet another exciting development: A study had found that taking a daily dose of HIV drugs
reduced the risk of infection for men who had sex with other men. In 2012, the FDA approved the use of
pre-exposure prophylaxis (PrEP) for adults at high risk of infection — one of the most significant milestones of the epidemic.

As new treatments for HIV/AIDS have made the diagnosis more manageable and even help prevent infection, public health challenges remain.

About 1.2 million people in the US were living with HIV at the end of 2018,
according to the CDC.
There are disparities in access to treatment, and Black and Hispanic Americans are
disproportionately affected by HIV. Resistance to HIV/AIDS medications has also become increasingly common.

Some researchers and clinicians began to shift their attention and efforts elsewhere after the toll of the early years, according to the New England Journal of Medicine. And despite the US setting a goal in 1997 to find an HIV vaccine within 10 years, four decades later, there is still no vaccine or cure.

Jimmy Kimmel Delivers One Last…
Sydney locks down parts of…