Vice President Kamala Harris‘ diplomatic trip to Guatemala and Mexico got off to a bumpy start Sunday after her plane was forced to return to Joint Base Andrews in Maryland about 25 minutes after it had taken off.

Air Force Two landed safely. Spokesperson Symone Sanders told reporters the plane returned because of a “technical issue” and said there were no major safety concerns.

“I’m good, I’m good,” Harris told reporters after getting off the plane. “We all said a little prayer, but we’re good.” 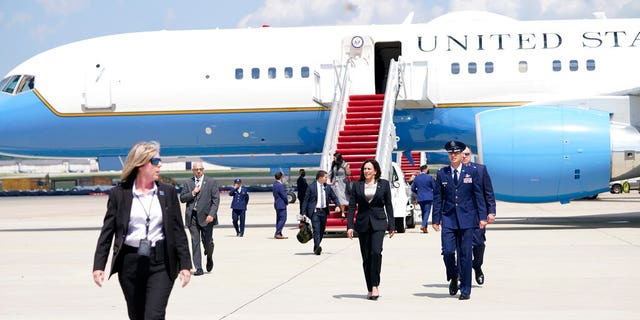 Vice President Kamala Harris deplanes Air Force Two after a technical issue forced the aircraft to return and land at Andrews Air Force Base, Md., Sunday, June 6, 2021, as she was en route to Guatemala City.
(AP)

Harris later arrived in Guatemala’s capital, where she was greeted by Guatemala’s Minister of Foreign Affairs Pedro Brolo.

A video shared by Sanders on Twitter shows the vice president and Brolo waving to a crowd upon arrival.

KAMALA HARRIS’ MEXICO, GUATEMALA VISIT: EVERYTHING YOU NEED TO KNOW

Harris’ two-day trip to Central America – her first foreign trip as vice president – is part of her efforts to lead diplomatic talks to tackle what the administration describes as the “root causes” of the crisis at the southern border.

President Joe Biden appointed Harris in March to lead the diplomatic outreach, just as the administration was dealing with a massive surge in migration at the border. 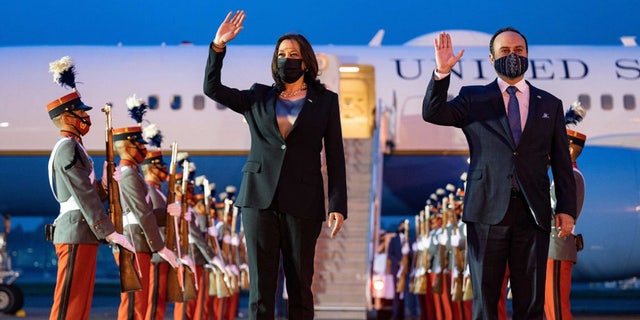 Harris has since come under criticism for not having visited the border. Saturday marked the 74th day that Harris has neither traveled to U.S. border communities nor held a news conference in connection with her duties as manager of the administration’s response to the border crisis.

In response to that criticism, Harris and her office have claimed that her focus was always on the “root causes” of the migration, not on conditions in U.S. border towns.

But her critics have argued that by visiting U.S. border communities, Harris would gain important insights on how the migrant crisis has been affecting those areas – in terms of crime, business and strain on law enforcement personnel and resources.