President Biden and British Prime Minister Boris Johnson talk as they look over copies of the original Atlantic Charter from 1941. 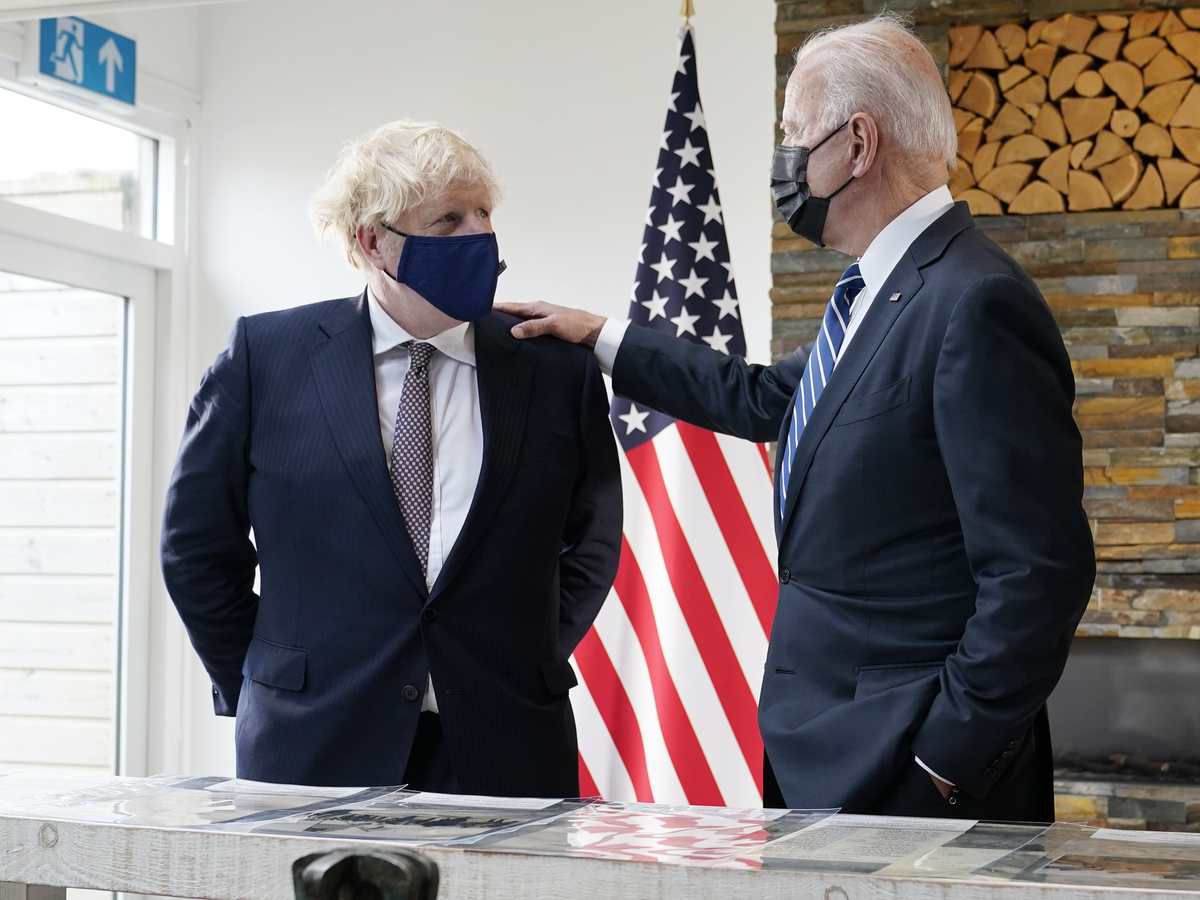 President Biden and British Prime Minister Boris Johnson talk as they look over copies of the original Atlantic Charter from 1941.

In their first face-to-face meeting, President Biden and British Prime Minister Boris Johnson signed a 21st century version of the historic “Atlantic Charter,” an attempt to depict their countries as the chief global leaders taking on the world’s biggest challenges.

The two leaders pledged to work “closely with all partners who share our democratic values” and to counter “the efforts of those who seek to undermine our alliances and institutions.”

The charter encompasses a commitment to cooperate on climate change, technology, and science. It also reaffirms support for NATO, while underscoring opposition to election interference and disinformation campaigns.

“We must ensure that democracies – starting with our own – can deliver on solving the critical challenges of our time,” the document states. By highlighting their similarities as “democracies,” they’re trying to create a clear contrast with Russia and China.

The document is a symbolic nod to the original Atlantic Charter signed in 1941 by former American President Franklin D. Roosevelt and former British Prime Minister Winston Churchill. That document was a blueprint for emerging from World War II, and included a set of common principles, such as liberalized trade, labor standards, and commitments to restore self-government to countries that had been occupied.

Biden has often spoken of his presidency in grand historical terms and he’s repeatedly praised Roosevelt as a role model for his time in the White House. Likewise, Johnson sees Churchill as a personal idol, and has even written a book about him.

This new charter comes not after a world war, but a global pandemic, and it is attempting to clarify what the coming decades can and should look like from their shared perspectives, officials said. Signing this charter signals a renewal of the historic “special relationship,” a phrase coined by Churchill to describe the depth of ties between the two democracies.

Before the two men signed this new Atlantic Charter, they viewed a copy of the original document, under glass, as reporters looked on. The rest of their meeting was behind closed doors. Former President Franklin Delano Roosevelt and British Prime Minister Winston Churchill aboard a ship off the coast of Newfoundland in 1941, where they signed the original Atlantic Charter. 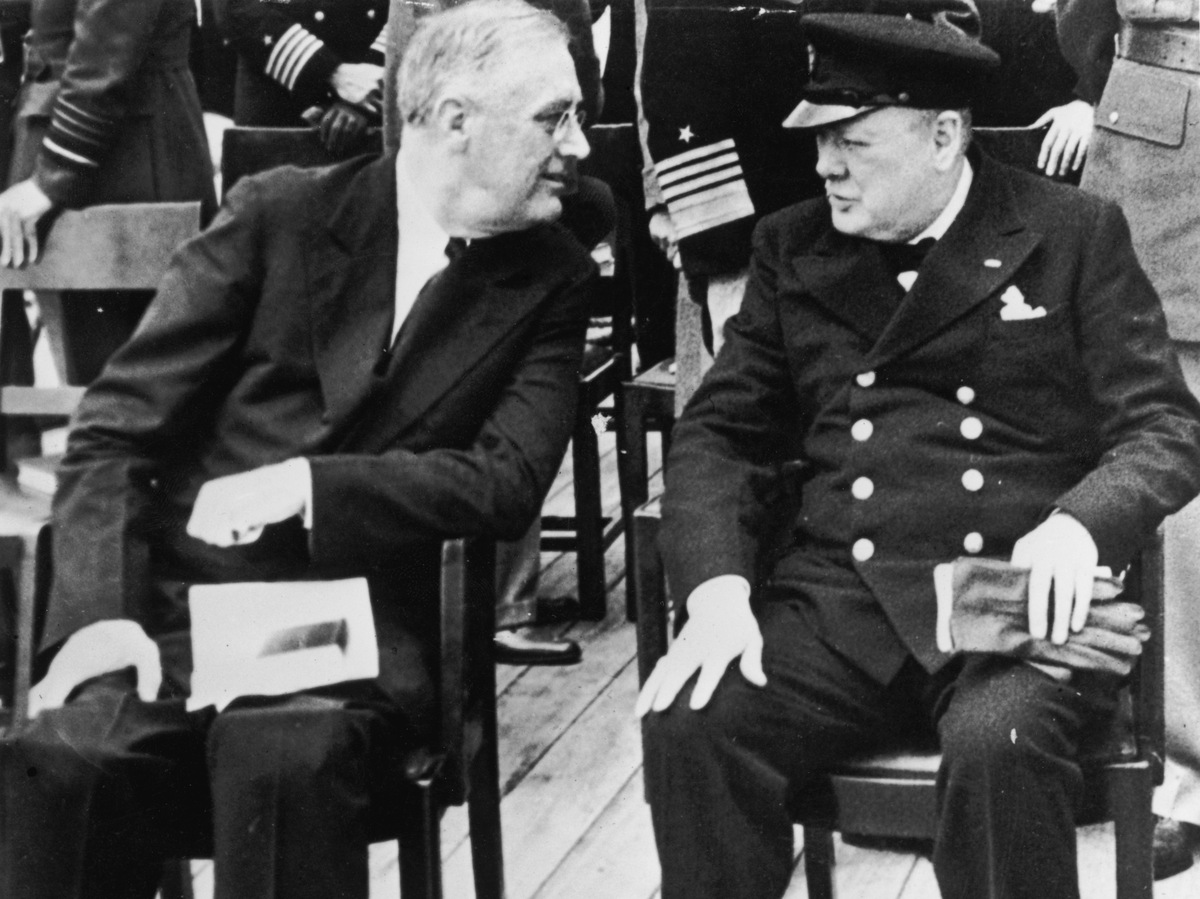 Former President Franklin Delano Roosevelt and British Prime Minister Winston Churchill aboard a ship off the coast of Newfoundland in 1941, where they signed the original Atlantic Charter.

Roosevelt and Churchill forged a deep wartime friendship that some historians now say “saved the world.”

There have been plenty of questions about how “special” (or not special) the personal relationship between Biden and Johnson might be. Prior to today’s meeting in Cornwall ahead of the Group of Seven (G7) summit, the two men had never met in person.

And, yet first impressions had already been made. During the 2020 presidential campaign, Biden mocked Johnson, calling him as a “physical and emotional clone” of former President Donald Trump at a fundraiser.

Biden opposed the United Kingdom leaving the European Union. Johnson championed Brexit, and eventually shepherded it through Parliament. Biden wants to rebuild America’s global alliances. Johnson is seen as the embodiment of nationalist populist politics. Biden ran for president as an explicit rebuke of former Trump. Johnson was known for being particularly chummy with the former president, who once admiringly called him “Britain Trump.”

Trump, and some political observers, saw Brexit in a similar vein to Trump’s “America First” philosophy.

Still, the first European leader Biden spoke with after his inauguration was Boris Johnson, who was quick to acknowledge Biden’s victory at a time when his old friend Trump was bitterly fighting it.

National security adviser Jake Sullivan told reporters earlier this week that Biden and Johnson have had a couple of phone calls, and described those conversations as “warm” and “constructive.”

“They’ve been very much down to business,” he said.”

Still, the two men aren’t starting from a clean slate.

Last year, during the presidential campaign, Biden warned that a post-Brexit free-trade U.S.-U.K. trade deal could be in jeopardy if peace in Northern Ireland became a “casualty” of Brexit.

We can’t allow the Good Friday Agreement that brought peace to Northern Ireland to become a casualty of Brexit.

Any trade deal between the U.S. and U.K. must be contingent upon respect for the Agreement and preventing the return of a hard border. Period. https://t.co/Ecu9jPrcHL

As part of a deal to prevent a hard border between Northern Ireland and Ireland itself in the aftermath of a Brexit, a customs border has been created, dividing Northern Ireland from the rest of the United Kingdom. In April, that helped trigger some of the worst riots the region has witnessed in years.

Biden, who often talks about his Irish heritage, has warned that he would scrap any trade deal if Britain damages the 1998 Good Friday Agreement, which brought peace to the region after decades of violence. The EU hopes Biden can press Johnson to abide by his government’s agreement to institute the required customs checks along the border.

Johnson is eager to cut a free trade deal with the United States. Although such a deal is not expected to be especially lucrative — trade barriers between the two countries are already low – it would boost Johnson’s prestige and help him fulfill his promise to British voters that leaving the EU would free the United Kingdom to make new trade agreements with major economies.

A U.K.-U.S. trade deal is not particularly high on Biden’s agenda. There are other issues, such as pandemic recovery and climate change, that are of importance to Biden — issues where the two men are expected to find significant common ground.

Johnson welcomed Biden’s decision to rejoin the Paris climate accord and the World Health Organization. Trump had abandoned both.

Biden, who hopes to lead a G7 push to end the global pandemic, is set to announce a new donation of COVID-19 vaccines to poorer countries later on Thursday, news that leaked before his meeting with Johnson. The United Kingdom has thus far declined to send vaccines overseas.

President Biden will announce Thursday in Cornwall that US has bought 500 million doses of Pfizer vaccine to donate to COVAX to help countries w/out enough doses, according @npr @tamarakeithNPR This is a big deal. it comes two days before opening of G7 summit here

Jimmy Kimmel Delivers One Last…
Sydney locks down parts of…