President Joe Biden signs the Juneteenth National Independence Day Act in the East Room of the White House on Thursday. 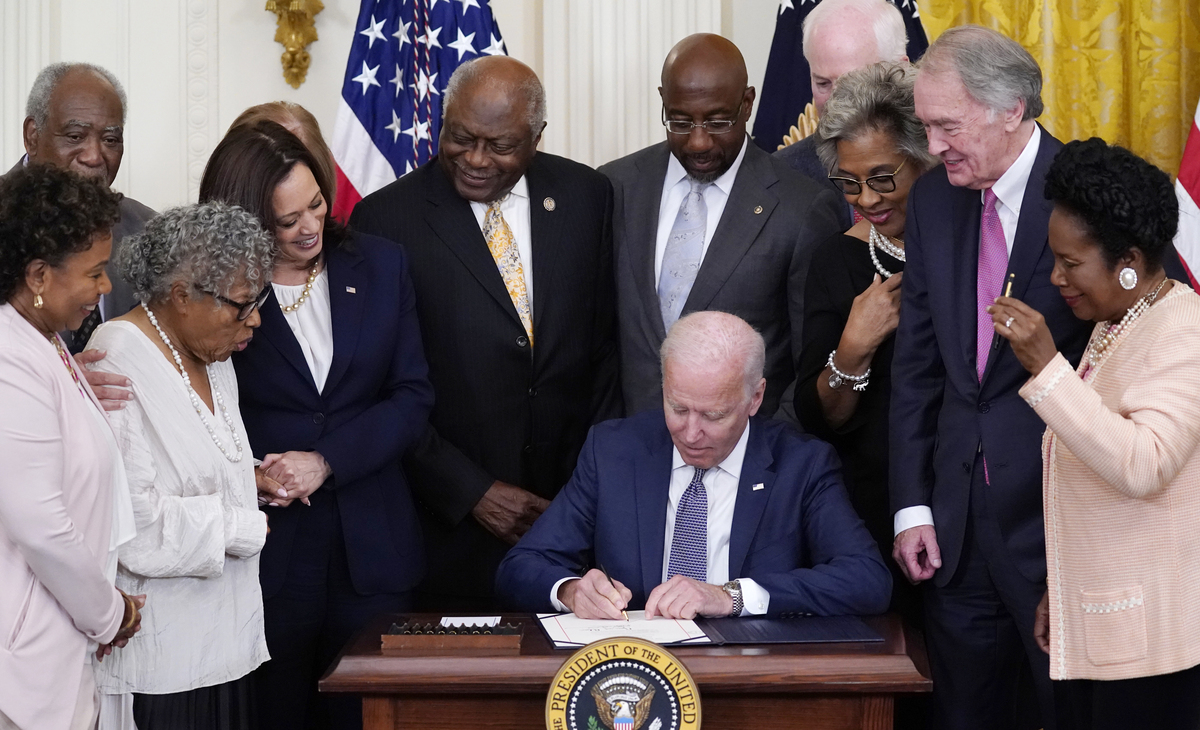 President Joe Biden signs the Juneteenth National Independence Day Act in the East Room of the White House on Thursday.

President Biden on Thursday signed a bill to recognize Juneteenth — the celebration to commemorate the end of chattel slavery in the United States — as a federal holiday.

Federal employees will observe the holiday for the first time on Friday.

“Throughout history, Juneteenth has been known by many names: Jubilee Day, Freedom Day, Liberation Day, Emancipation Day, and today, a national holiday,” said Vice President Harris, who is the first woman, Asian-American and the first Black person to serve as vice president.

“We are gathered here in a house built by enslaved people. We are footsteps away from where President Abraham Lincoln signed the Emancipation Proclamation,” she said at the White House signing ceremony. “We have come far, and we have far to go. But today is a day of celebration. It is not only a day of pride. It’s also a day for us to reaffirm and rededicate ourselves to action.”

Guests at the event included members of the Congressional Black Caucus and 94-year-old Opal Lee, a decades-long activist to see Juneteenth recognized nationally.

Biden’s signature comes after the measure cruised through both chambers of Congress earlier this week, facing no opposing votes in the Senate and only minor Republican dissent in the House of Representatives.

The importance of June 19

Juneteenth is celebrated annually on the 19th of June to mark the date some of the last enslaved people in the Confederacy became free.

While President Abraham Lincoln had signed the Emancipation Proclamation in 1862 to free enslaved people in Confederate states, it was not until two and a half years later that many Black people still held in bondage in Texas were told that the order had freed them.

Texas’ isolation from the rest of the country and remote landscape kept Union soldiers from enforcing the message as quickly there as they had been able to elsewhere.

It was not until months later with the passage of the 13th Amendment that slavery was abolished on the federal level, not just in states that had aligned themselves with the Confederacy.

The federal recognition of Juneteenth is one of several Biden administration attempts to reconcile America’s dark and troubled past with racial minorities, specifically African Americans.

“Juneteenth marks both the long, hard night of slavery and subjugation, and the promise of a greater morning to come,” Biden said.

He described slavery as a moral stain on the country and said enslavement of Black Americans was the nation’s “original sin.”

As a candidate, Biden acknowledged the systemic racism that has since the country’s founding plagued the institutions foundational to personal success, including the housing market, criminal justice and environmental concerns.

When he took office in January, Biden inherited a nation on the brink, with protests and counterprotests against social issues like police use of force threatening to erode the public trust and set back some of the progress the nation has made in its conversations on race over the past decades.

While Biden has faced searing criticisms from the left wing of his party for not doing enough to meaningfully address the concerns of Black Americans, Republicans — following four years of a standard-bearer who stirred racial animus and civil discord — have accused Biden of bending to special interest groups at the expense of uniting a deeply divided nation.

“This day doesn’t just celebrate the past. It calls for action today. I wish all Americans a happy Juneteenth,” Biden said.