Teigen has been at the center of scandal for weeks now after being accused of intense cyberbullying in the past which was intensified when designer Michael Costello came out with his own claims after the star publicly apologized.

Costello, 38, alleged in a lengthy Instagram post that Teigen sent him disparaging messages over social media years ago that caused him to have suicidal thoughts.

The “Project Runway” alum said the messages from Teigen, 35, and her campaign against his brand caused “trauma” and his mother Nancy told Fox News that it was hurtful that her son’s name was not included in Teigen’s apology and that “the damage is done.”

JOHN LEGEND’S SILENCE ON CHRISSY TEIGEN’S SCANDAL PUTS HIS BRAND AT RICKS, EXPERT SAYS: ‘WAS HE OK WITH IT?’

The cookbook author’s team has since claimed that the alleged messages between her and Costello are fake, deepening the controversy further.

Now, Legend, who has been married to Teigen since 2013, has come to his wife’s defense on Twitter.

“Chrissy apologized for her public tweets, but after her apology, Mr Costello fabricated a DM exchange between them,” the 42-year-old singer said online on Friday. “This exchange was made up, completely fake, never happened.”

“Honestly I don’t know why anyone would fake DMs to insert themselves in this narrative, but that’s what happened,” he continued. “I encourage everyone who breathlessly spread this lie to keep that same energy when they correct the record.”

After Teigen’s team denied that the alleged messages were real, Costello’s rep reacted to the “Cravings” author’s claims. 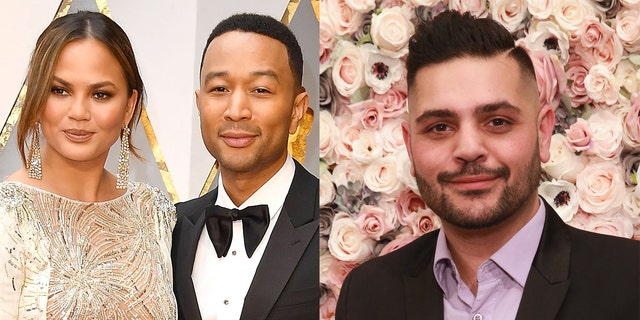 John Legend has defended his wife Chrissy Teigen on Twitter and backed up her claims that alleged disparaging messages sent to Michael Costello were faked.
(Getty Images)

In a statement to Fox News on Friday, his rep stated, in part: “The fact that Chrissy Teigen’s team is desperately trying to prove the DM’s are fake and attempts to discredit Michael Costello, a victim of trauma and bullying by Chrissy Teigen both online and offline, confirms that she remains the same bully, despite her public apology.”

“When a victim feels like their only recourse is to speak up, and the abuser’s first move is to discredit the victim and shame him publicly, this perpetrates victim-blaming and it costs lives,” the rep added.

“Seven years ago, when Michael Costello presented Chrissy Teigen with evidence directly that the alleged racist comment she saw was fake, she refused to believe him. Now, her team is quick to discredit Michael’s character in an attempt to salvage her image and partnerships negatively impacted by her decade-long problematic behavior,” the rep continued.