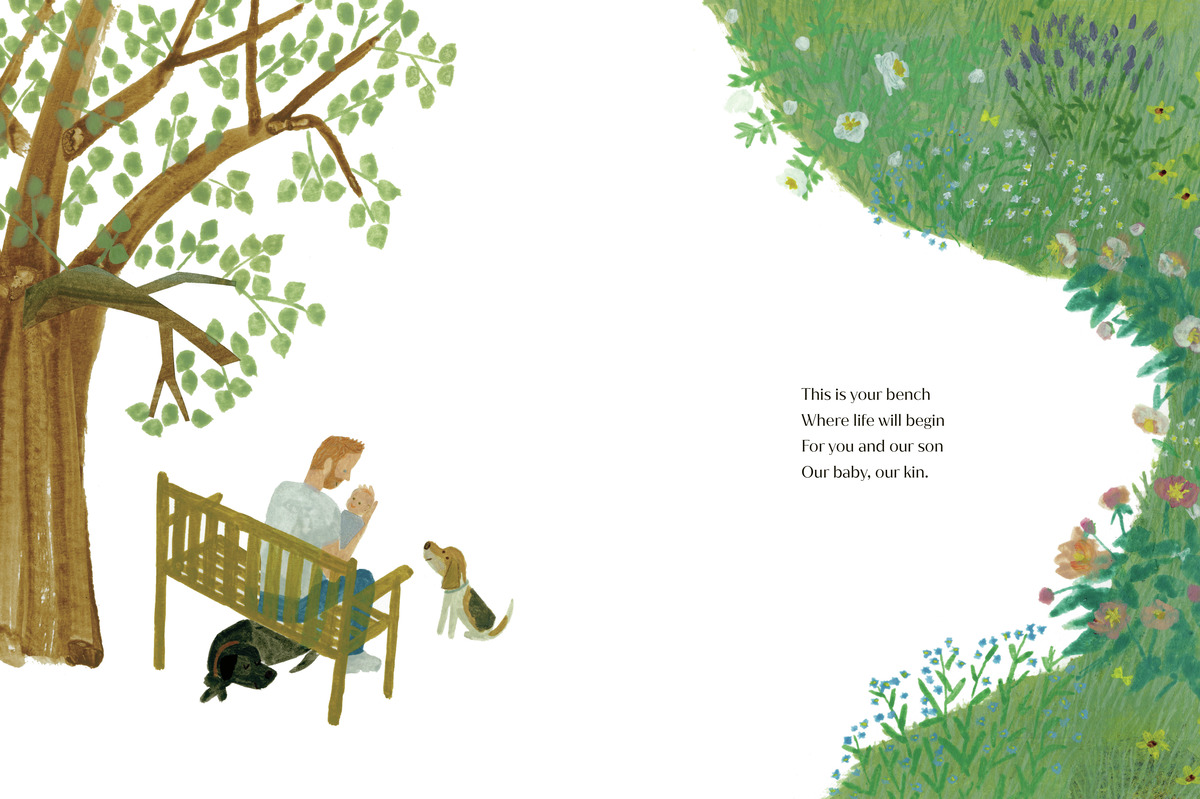 For Prince Harry’s first Father’s Day, Meghan, The Duchess of Sussex, got him a bench.

“As most of us do, you go, what am I going to get them as a gift? And I thought I just wanted something sentimental and a place for him to have as a bit of a home base with our son,” Meghan says.

And on a little plaque on the back of the bench, she wrote a poem, about the moments she hoped they would share on that bench. “This is your bench,” the poem reads, “Where life will begin/For you and our son/Our baby, our kin.”

Now, two years later, Meghan and Harry have added a second child to their family — daughter Lilibet Diana was born in early June — and that poem is a children’s book. The Duchess of Sussex spoke to NPR about the book shortly before the birth of her daughter.

The Bench is a series of vignettes — fathers and their sons share a bench while they drink apple juice, wait for the bus, look at the stars, and put on their shoes. The bench is where they cry, celebrate, and mend their scraped knees and broken hearts.

Meghan says the poem was inspired by watching her husband and their son, Archie, together.

“I often find, and especially in this past year, I think so many of us realized how much happens in the quiet,” she says. “It was definitely moments like that, watching them from out of the window and watching [my husband] just, you know, rock him to sleep or carry him or, you know … those lived experiences, from my observation, are the things that I infused in this poem.” 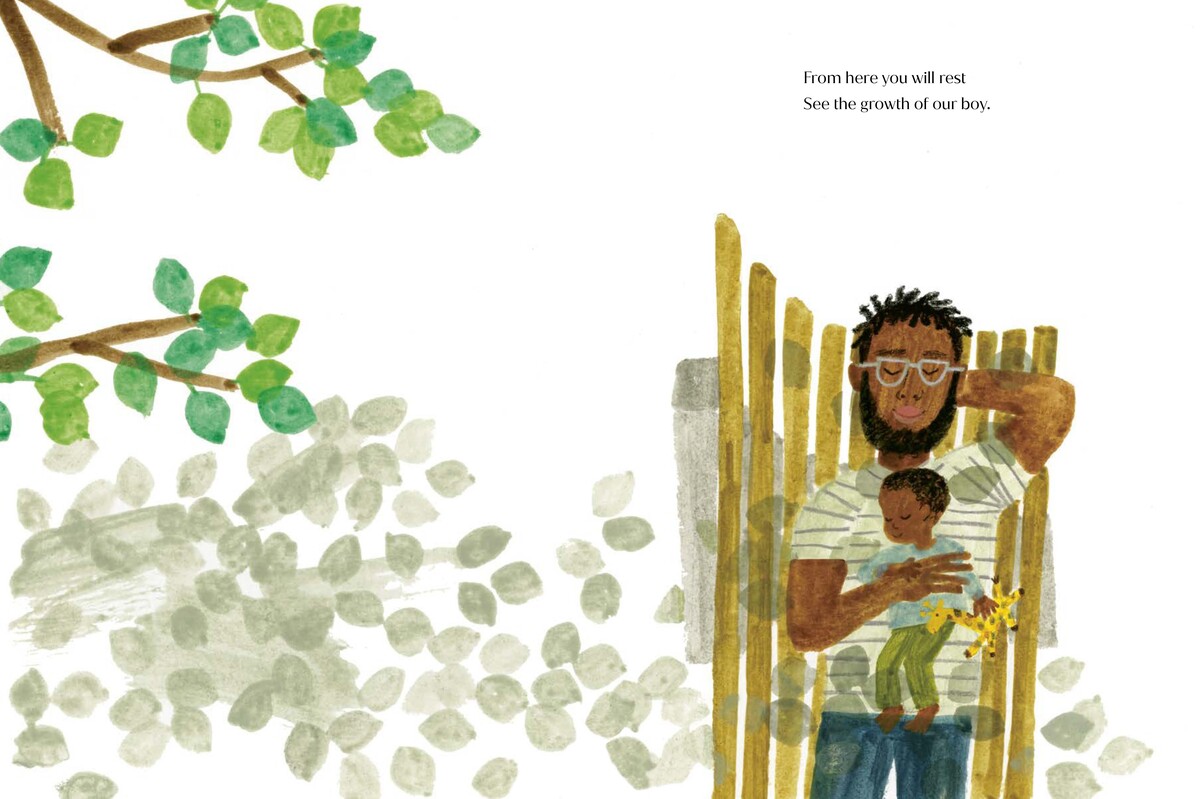 When it came time to turn the poem into a picture book, Meghan asked for Christian Robinson — the Caldecott Honor recipient and illustrator behind Milo Imagines The World and Last Stop on Market Street.

“This was just like, one day getting an email being like, ‘Would you want to work with Meghan, The Duchess of Sussex?’ And I’m like, in complete disbelief and excited,” Robinson says. “For me it was a no brainer.”

It was also a creative challenge — Robinson usually works in acrylic and cut-out pieces of paper. But for The Bench, he did the illustrations in a different medium.

“I wanted him to just try something a little bit new and work in watercolor,” says Meghan. “And that was specifically because I just felt that when you talk about masculinity and you talk about fatherhood, it can often not come across with the same softness that I was really after for this book. And I just wanted this to feel almost ethereal and light and Christian was able to use that medium and create the most beautiful images.” 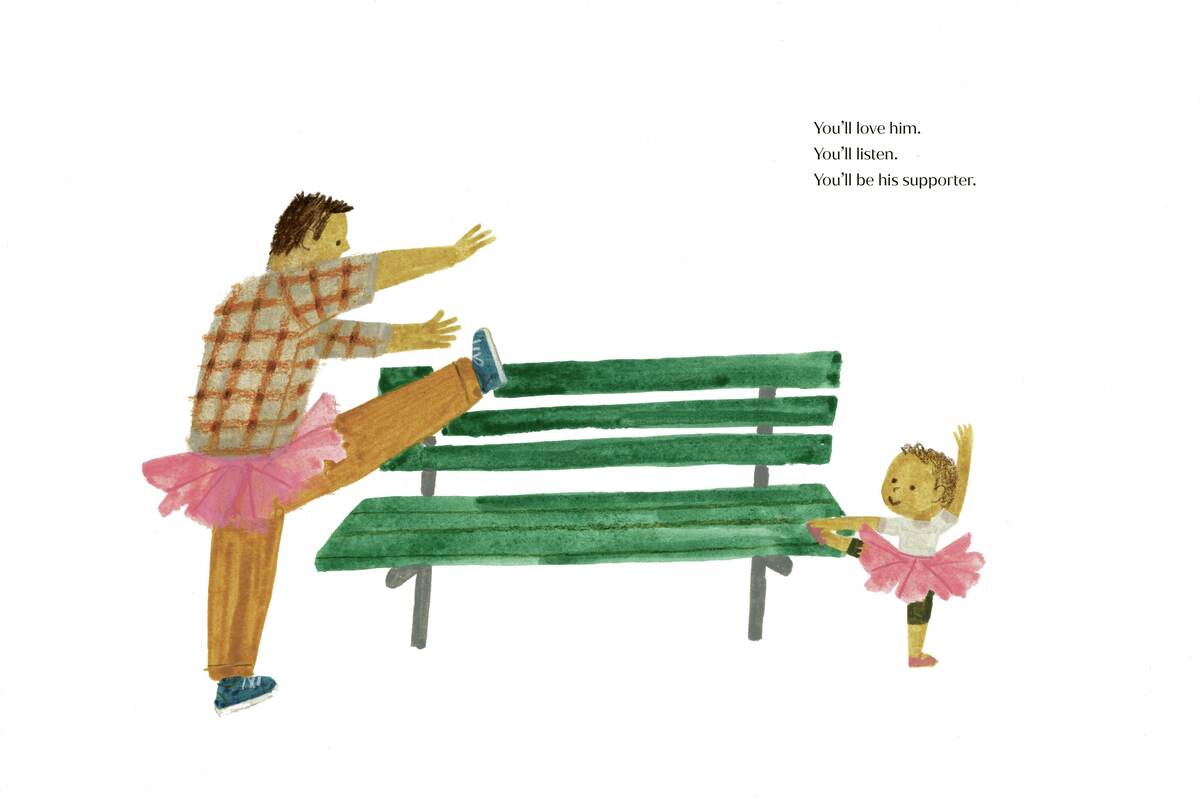 Robinson says he was up for the challenge.

“What makes creativity fun is when things are improvised … when you kind of have to explore and play and experiment,” he says. “I really think it was just the right note.”

The poem begins and ends with illustrations of the author’s own family. A red-haired father and his toddler sit on a bench, surrounded by their dogs. But the rest of the book shows all kinds of families — something that was important to both the author and the illustrator.

“I think for me, inclusivity and representing as many different families as we could was at the heart of this book,” says Robinson.

“Growing up, I remember so much how it felt to not see yourself represented,” says Meghan. “Any child or any family hopefully can open this book and see themselves in it, whether that means glasses or freckled or a different body shape or a different ethnicity or religion.”

One representation Meghan says she particularly wanted to include in The Bench was that of a military family. Years ago, she was on a USO tour with a sergeant from Texas.

“He had told me the story about how he wasn’t able to teach his son how to play catch because he was away,” Meghan says. “And so he and his son would mail this baseball back and forth to each other from Texas to Afghanistan and write the date on it.” 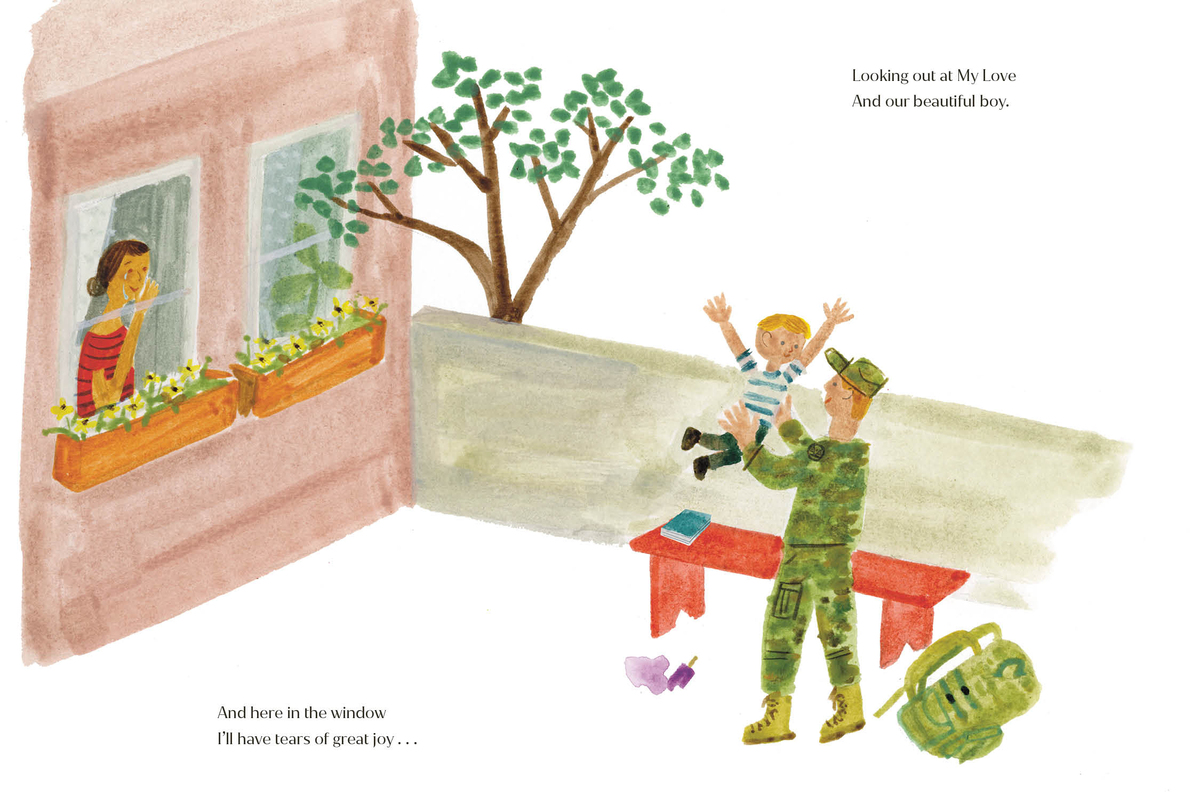 In The Bench, a mother standing at a window cries tears of joy, while a father in a military uniform greets his son outdoors. The father has thrown off his backpack in excitement, and the boy has discarded his popsicle to jump into his father’s arms.

“That page is true to form for him and his family,” Meghan says. “There are lots of little small moments like that that were personal memories or anecdotes that I wanted infused in there,” Meghan says.

“I needed my girls in there,” says Meghan.

But even though The Bench is a very personal, intimate poem that Meghan wrote for her husband, she says she hopes readers find its message universal.

“It’s a love story,” she says. “It’s really just about growing with someone and having this deep connection and this trust so that, be at good times or bad, you know that you had this person,” she says. “I really hope that people can see this as a love story that transcends the story of my family.”

Samantha Balaban and Melissa Gray produced and edited this interview for broadcast. Petra Mayer adapted it for the Web.