The Amazon Prime Day extravaganza is right on time this year, and as always, there are hundreds of deals to snag. If you’re due a smartphone upgrade, then there cannot be a better time than today as a whole bunch of Samsung phones — from the Galaxy S20 FE to the newest S21 line — are all selling at the lowest prices we’ve seen to date.

Samsung’s massively successful Galaxy S20 FE is even cheaper for Prime Day, available for just $479. It’s frankly a steal for a flagship-class phone that can still last you for years. The entire Galaxy S21 series is also discounted by $100 on its usual selling price — or a full $300 down from their MSRPs ($200 for the base S21 model). Meanwhile, the more budget-conscious among us can look at the Galaxy A71 5G, which is down to a sweet $375. 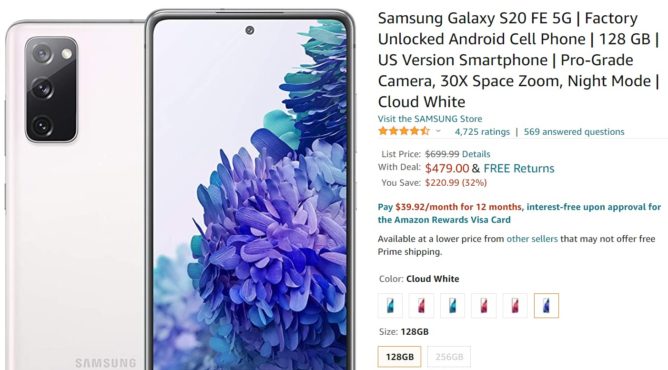 These are all the unlocked Samsung Galaxy phones that are currently discounted for Prime Day:

If you’re stuck between the two, the deciding factor is probably going to be size.

The Galaxy S21 and S20 FE are almost certain to be the highlight deals for anyone shopping for a smartphone right now. The Galaxy S20 FE offers up the large form factor you’re likely to be familiar with if you’ve shopped for a Samsung phone recently, though it uses 2020’s top-end Qualcomm chip (Snapdragon 865), not the newer Snapdragon 888 you’ll find in the Galaxy S21 family. In terms of speed, that’s unlikely to make a difference, though.

The S20 FE is easily one of the best smartphone buys around at $480, including major flagship features like IP68 water resistance, 5G, and wireless charging (unlike previous Samsung FE phones). The S21 is a smaller phone, but offers a more powerful chipset and modem, as well as full metal and glass construction (the S20 FE has a plastic rear cover). The S21 will also receive an additional major Android version upgrade above and beyond the S20 FE, given it launched with Android 11, though both are receiving the same total level of software support (three major updates).

Both phones work unlocked on all major US carriers, including AT&T, Verizon, and T-Mobile.

If you’re stuck between the two, the deciding factor is probably going to be size. The S20 FE is a very substantial phone, while the Galaxy S21 is more compact. The cameras between the two are largely similar, as are the software and displays (aside from their dimensions). Both present great values at these discounted prices, though, so we don’t think you’ll be unhappy with either decision. Both phones work unlocked on all major US carriers, including AT&T, Verizon, and T-Mobile — including the carriers’ respective 5G networks (though the unlocked S20 FE lacks mmWave network support).

You can check out the specs for both phones compared below. Our full review of the Galaxy S21 is here, and the review of the S20 FE is here. We also have a comparison of both phones in article format right here.

Given the S21 and S20 FE use near identical primary camera hardware, photos from the two will look largely similar. Here are a few samples from both.

Still not sure whether to buy?

We’ve given both the Galaxy S20 FE and S21 our coveted Most Wanted editors’ choice awards.

Among the editors at Android Police, there are few of us that don’t recommend Samsung’s newer smartphones these days. Between good performance, satisfactory advances in the camera department, and a much better commitment to software upgrades, the company’s class-leading hardware finally seems to have met its match in the end product experience — and that’s saying a lot.

We stand behind that optimism, too: We’ve given both the Galaxy S20 FE and S21 our coveted Most Wanted editors’ choice awards, and feel they’re among the very best smartphones you can buy right now. If you’re deciding whether it’s worth holding out until 2022 or even the fall of 2021, that’s more of a personal question of how long you can stand holding onto your current phone more than it is whether upgrading is “worth it.”

If you are concerned about getting tech envy when the latest and greatest gets announced next year, though, consider that Samsung’s trade-in policies are the very best in the Android world, offering some truly crazy prices for those who choose to upgrade year over year in the Galaxy ecosystem. Finally, if you’re looking for a case to protect your shiny new investment, we’ve got a list of picks right here.

Do make sure to grab these deals while the phones are still in stock, as at these prices, it’s entirely possible that Amazon will run out of your favorite color much before the Prime Day festivities end. You can head to our dedicated Prime Day hub to find several more similar deals on phones, tablets, smart home devices, headphones, TVs — basically everything tech.

Oh, and by the way: the Galaxy S21 doesn’t come with a wall charger in the box, so you’ll want to check out our wall charger guide for the best compatible picks.