There was a reason why Kate Middleton didn’t attend the unveiling of Princess Diana’s statue, despite her initial desire to be a part of the event.

“Out of respect for [Prince] Harry and [Prince] William, [the royal family] wanted it to be just about Diana’s sons and not a huge public affair,” a source told Us Weekly on Friday.

“Kate was definitely supporting [her husband] William while physically not being there and really wanted to attend, but the family as a whole decided it was best for the kids and her to stay home,” claimed the palace insider.

Middleton, 39, and her three children Prince George, 7, Princess Charlotte, 6, and Prince Louis, 3, are expected to visit the statue “at a later time,” the source added. 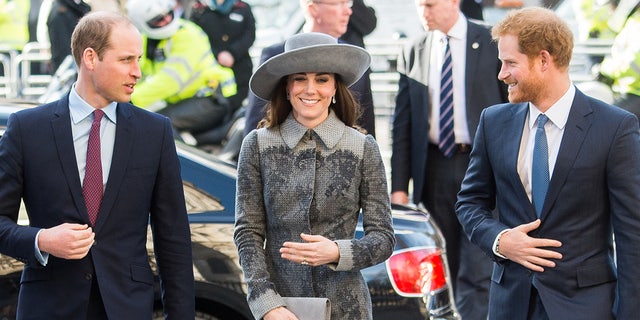 From left: Prince William, Duke of Cambridge, Catherine, Duchess of Cambridge and Prince Harry attend the Commonwealth Observance Day Service on March 14, 2016, in London, United Kingdom. The service is the largest annual inter-faith gathering in the United Kingdom and will celebrate the Queen’s 90th birthday.
(Photo by Samir Hussein/WireImage/Getty Images)

On Thursday, Harry, 36, and William, 39, put aside their differences to honor their late mother on what would have been her 60th birthday.

Diana’s three siblings joined the brothers for a private ceremony in the Sunken Garden at London’s Kensington Palace, a place the princess once found solace. It was the second time the brothers appeared together in public since Harry stepped aside from royal duties over a year ago.

The statue, commissioned by the brothers in 2017, shows Diana surrounded by three children. The style of her dress is meant to evoke the final period of her life when she gained confidence in her humanitarian work.

“Today, on what would have been our mother’s 60th birthday, we remember her love, strength and character – qualities that made her a force for good around the world, changing countless lives for the better,” William and Harry said in a joint statement. “Every day, we wish she were still with us, and our hope is that this statue will be seen forever as a symbol of her life and her legacy.”

Video released after the event showed the brothers entering the garden together before talking with family members and then pulling two ropes to remove the cover from the statue.

Harry stepped back from royal duties last year and moved his family to California for a more peaceful existence that he could better control. William has pressed on with royal life and the never-ending demands that come with being second in line to the throne.

Their relationship became even more tensed in March when Harry and his wife, Meghan Markle, gave an explosive interview to Oprah Winfrey that was watched by nearly 50 million people globally.

During the televised sit-down, Harry confirmed rumors that he and his brother had been growing apart, saying “the relationship is ‘space’ at the moment” — though he added that “time heals all things, hopefully.” Harry also told Winfrey, 67, that his father, Prince Charles, didn’t accept his calls for a time. 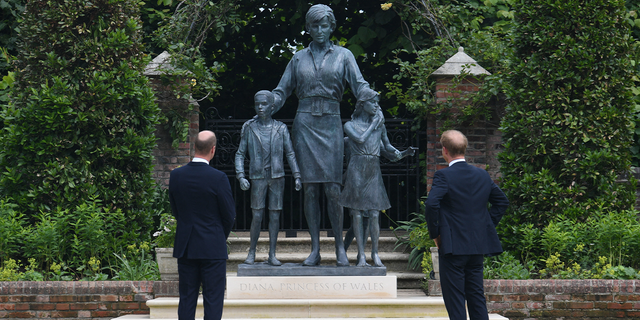 Britain’s Prince William, Duke of Cambridge (L) and Britain’s Prince Harry, Duke of Sussex unveil a statue of their mother, Princess Diana at The Sunken Garden in Kensington Palace, London on July 1, 2021, which would have been her 60th birthday.
(Photo by DOMINIC LIPINSKI/POOL/AFP via Getty Images)

The couple revealed that before the birth of their first child, an unidentified member of the royal family had expressed concern about how dark his skin might be. Harry later confirmed the person in question wasn’t the queen or her husband Prince Philip. Days after the broadcast, William responded to questions called out by reporters, stating “we are very much not a racist family.”

On June 4, Harry and Markle, 39, welcomed their second child, a daughter named Lilibet “Lili” Diana Mountbatten-Windsor. The child is eighth in line to the British throne.

The name pays tribute to both Harry’s grandmother, Queen Elizabeth II, whose family nickname is Lilibet, and his late mother.