North Carolina is included in the path of Hurricane Elsa, the first name hurricane of the season, as of Friday night.

The 11 p.m. update from the National Hurricane Center showed the storm was 730 miles east-southeast of Kingston, Jamaica.

“The storm has weakened slightly – with the forward motion – it’s going to have a hard time maintaining its integrity,” said WRAL meteorologist Mike Maze. 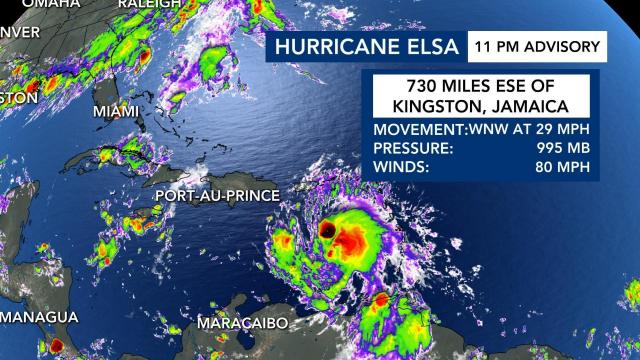 Top winds for the storm are currently at 80 miles per hour.

The storm, which is moving 29 miles per hour, is currently heading to Hispaniola and Cuba.

The latest forecast track from the NHC showed Hurricane Elsa continuing to move west-northwest and interacting with Cuba, before eventually making its way into the southeastern Gulf before making a turn.

“Now, North Carolina is in the cone,” said Maze.

If the storm does make its way to the state, it looks like the storm would be here on Thursday, according to Maze.

There are two things to watch with the storm:

“Upper-level wind shear is going to increase over the next 24-48 hours, which should weaken the storm, in theory. Also, with interaction of the land-mass [around Cuba] may further weaken it, so by the time it does get into the Gulf, it may be much weaker than it’s forecasted now,” explained Maze. 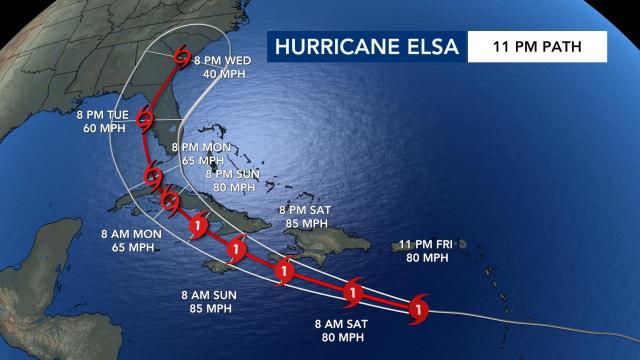 Maze added that the spaghetti model plots are now showing a more general consensus that the storm will head in the current forecasted direction.