In one of its final decisions of the term, the Supreme Court upheld a controversial Arizona voting law, raising questions about next steps for voting rights advocates.

The court upheld two Arizona laws — one of which banned the collection of absentee ballots by anyone other than a relative or caregiver, otherwise known as “ballot harvesting”; the other threw out any ballots cast in the wrong precinct.

The decision, though, was a blow to those who believe voting access is more important than rooting out fraud — and that’s most Americans, the latest NPR/PBS NewsHour/Marist poll found. Fifty-six percent said making sure that everyone who wants to vote can do so is a bigger concern than making sure that no one who is ineligible votes.

“It very much narrows the path of challenging these many, many voter obstacles that states are instituting across the country,” Debo Adegbile, an anti-discrimination attorney, told NPR’s Nina Totenberg.

With a solidified 6-3 conservative court majority, the ideological lines upon which this decision was drawn, the direction of the court is clear. And the influence of former President Donald Trump’s court appointees will likely last for a very long time.

A year before the potentially consequential midterm elections — and two years before the presidential primaries begin in earnest — here are four things to watch for what’s next for voting rights: Kristen Clarke, assistant attorney general for the Civil Rights Division, speaks at a news conference at the Department of Justice on June 25 to announce a lawsuit against the state of Georgia over its new election laws.

Many GOP-led states are enacting restrictive voting laws. The Biden Justice Department is already suing Georgia over the law there.

“Our complaint alleges that recent changes to Georgia’s election laws were enacted with the purpose of denying or abridging the right of Black Georgians to vote on account of their race or color, in violation of Section 2 of the Voting Rights Act,” Attorney General Merrick Garland said at a news conference last week.

But Section 2 is exactly what was at issue in this week’s Supreme Court case, and the court’s conservatives clearly signaled which side of voting rights they are on.

Reacting to the decision, Justice Department spokesman Anthony Coley said, “The department remains strongly committed to challenging discriminatory election laws and will continue to use every legal tool available to protect all qualified Americans seeking to participate in the electoral process.”

He hinted, however, that there is only so much DOJ can do. “The department urges Congress to enact additional legislation to provide more effective protection for every American’s right to vote,” Coley added.

The Voting Rights Act had passed with broad bipartisan support in Congress for decades until the Supreme Court hollowed out a key section of it almost a decade ago.

The court’s narrow 5-4 majority in that case also pointed to Congress to fix it.

But since that Supreme Court decision, there has been little movement toward a voting-rights bill that can pass both the House and Senate. Last month, Republicans filibustered a version that passed the Democratic-controlled House.

There are two voting-rights bills — the broad For the People Act and the more narrow John Lewis Voting Rights Act, named for the late congressman and civil rights icon. Both are stalled.

That has led to calls from many progressives and some civil rights groups to eliminate the procedure that requires 60 votes to overcome a filibuster.

“We know that without congressional action, there is not nearly the scope of enforcement initiatives available to the president that we think are necessary,” Wade Henderson, head of the Leadership Conference on Civil and Human Rights, told NPR’s Ayesha Rascoe. “For that reason, both bills must be passed in some form.”

Key Democratic senators, however, like Joe Manchin of West Virginia and Kyrsten Sinema of Arizona, do not support eliminating the procedural step because they fear it will lead to even more partisanship. Eliminating it cannot pass without their support because of Democrats’ narrow majority (with the tie-breaking vote of Vice President Harris).

3. Lots of efforts in the states A woman holds signs at a rally at the state Capitol on June 20 in Austin, Texas, to fight SB7, a controversial voting bill. 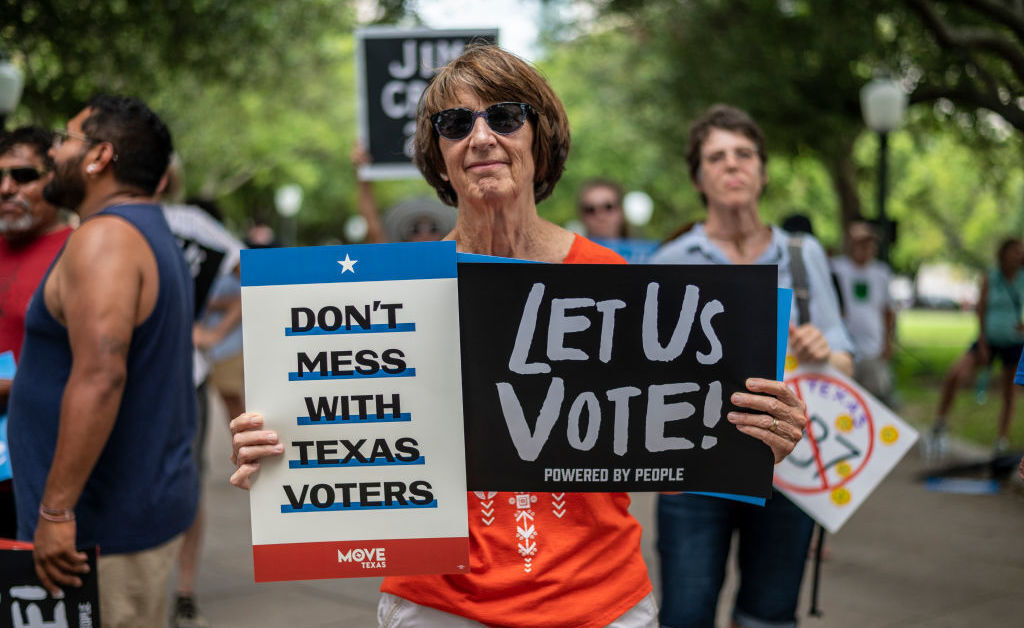 A woman holds signs at a rally at the state Capitol on June 20 in Austin, Texas, to fight SB7, a controversial voting bill.

Like so many other controversial issues that are deadlocked in polarized Washington, most of the action is taking place in the states.

Hundreds of bills have been introduced, and they overwhelmingly skew toward curtailing access. In fact, the country has already enacted more restrictive voting laws than in any other time in U.S. history.

Already, 17 states enacted 28 new laws that restrict access, the most ever, according to the Brennan Center for Justice, which tracks legislation and advocates for more expansive voting laws.

There was rare bipartisan agreement in Kentucky to expand voting access, but, largely, Republican-led states are looking to restrict voting access, while Democratic-led ones are trying to expand it.

President Biden condemned the Supreme Court decision, saying it would cause “severe damage” to voting rights.

Cedric Richmond, a senior White House adviser, told NPR’s Rascoe that the White House views this moment as the beginning of the fight.

Richmond added that Biden is going to be using the bully pulpit and the power of the White House to try to bring civil rights groups, private companies and activists together to bring more attention to it.

Activists say Biden should push to keep in place the safety measures that were enacted during the last election to protect unvaccinated people against COVID-19.

Vice President Harris is the point person for the administration’s efforts. The president himself will be taking the message on the road next week, hoping, in the words of another president, that change can come from outside Washington.

But even when former President Barack Obama tried that, on things like gun violence, it didn’t work out so well.

And big, sweeping change — that can only come from Congress.