Danita Bilozaze, alongside her daughter Dani, celebrated the completion of her master’s degree in education with a portrait session last year at Kye Bay in Comox Valley, British Columbia. Bilozaze’s studies focused on Indigenous language revitalization. 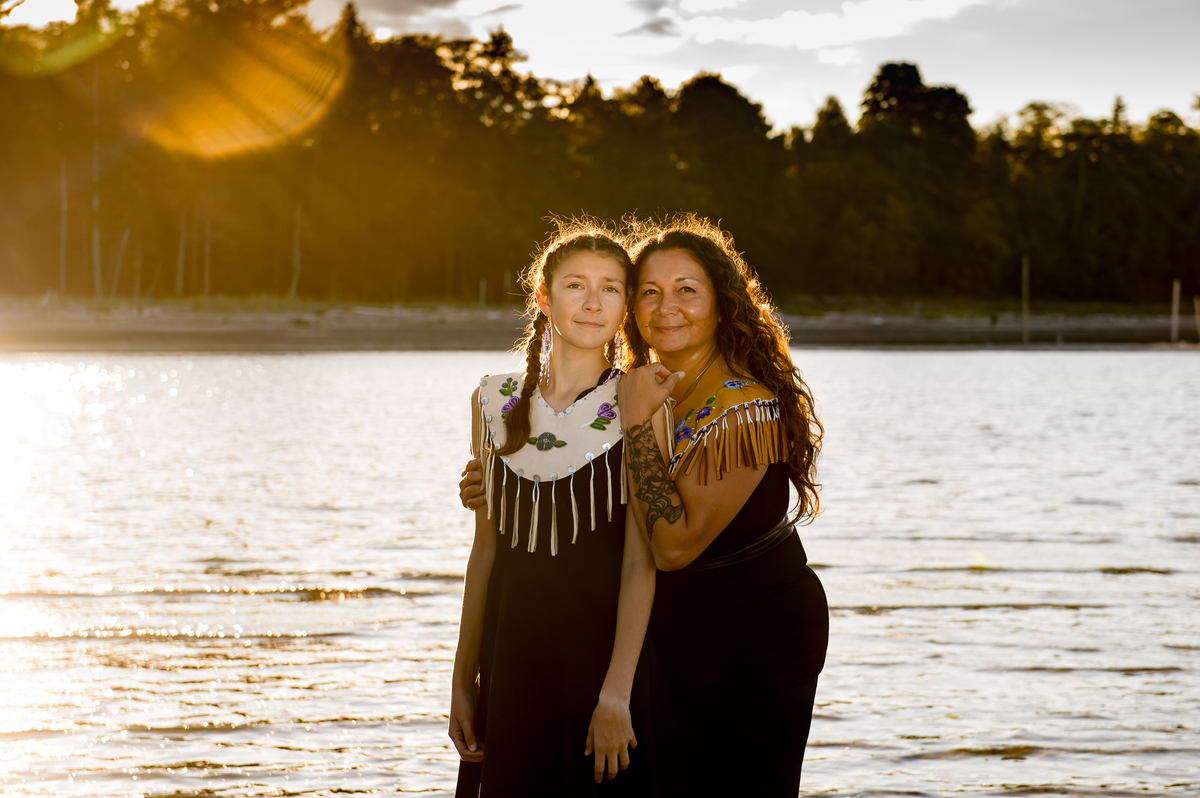 Danita Bilozaze, alongside her daughter Dani, celebrated the completion of her master’s degree in education with a portrait session last year at Kye Bay in Comox Valley, British Columbia. Bilozaze’s studies focused on Indigenous language revitalization.

For as long as she can remember, Danita Bilozaze knew that the name on her birth certificate, “Danita Loth,” didn’t reflect her Indigenous identity.

From the stories her mother recounted to her, she knew that Catholic missionaries had changed her family’s name. Her great-grandfather, a man known as Lor Bilozaze, was written into priests’ logs as “Loth Bilozaze.” Government record books in Canada ultimately dropped the “Bilozaze,” and Loth became their surname.

She never felt a connection with that name. But “Bilozaze,” which means “the makers” in her native Denesuline language, she said, is integral to the preservation of her identity and culture as a member of the Cold Lake First Nations.

“It means everything to me because it lines up with who I am,” she said. “I am an educator, I am a teacher, I am a baker, I’m an artist. I’m always, always, forever making things. So when you have something that was taken away from your family, like your birthright or your name and you have a chance to make that right for future generations, it means everything to take back what is rightfully mine.” “Loth Bilozaze,” the name of Bilozaze’s great-grandfather, was changed to “Lor Bilozaze,” according to a photocopied document found in the Provincial Archives of Alberta. “Bilozaze” was later dropped from government records.

Last year, the 49-year-old began an emotional and frustrating nine-month-long journey to officially change her name.

A new policy that promotes name reclamation promises that those following in Bilozaze’s footsteps won’t have to face the same hurdles.

A step toward reconciliation

Earlier this month, federal officials in Canada announced a new policy process that allows Indigenous citizens to restore their names on government-issued identification, including passports, for free until May 2026.

It’s unclear how many Canadians, 5% of whom are Indigenous, will pursue name reclamation under the new policy.

Frank Deer, a research chair and associate professor in Indigenous education at the University of Manitoba, says that most First Nations tribal members have lost their original Indigenous names to history as a result of forced assimilation and poor government record-keeping.

Among native people who can’t reclaim their names because of inadequate records, Deer says there’s a growing interest in acquiring new Indigenous names that carry a meaningful connection to their communities.

“Many are actually not reclaiming a lost name,” he says. “They’re simply claiming a name.”

A history of “cultural genocide”

The new policy implements a six-year-old recommendation from the Truth and Reconciliation Commission. It’s known as Call to Action No. 17: An appeal to all levels of government to allow residential school survivors and their families to reclaim names changed by the residential schools.

The policy was unveiled against the backdrop of last month’s harrowing discovery of the remains of 215 Indigenous children in a mass grave at a former residential school in Kamloops, British Columbia.

“It was a very harsh reminder that as a country, we have to come to grips with the fact that the residential school system was something that could have and did occur in a country that prides itself on our diversity and our relationship with Indigenous peoples,” Citizenship Minister Marco Mendicino told NPR.

Between 1830 and 1998, Canadian governments and churches separated more than 150,000 native children from their parents and confined them to mandatory boarding schools. The Truth and Reconciliation Commission said the effort amounted to “cultural genocide.” There — at Indian residential schools like Blue Quills in Alberta, which Bilozaze’s grandmother attended — students were given Christian names, had their hair cut and their clothes replaced with uniforms, suffered physical and sexual abuse, and punished for speaking their own languages.

The commission estimated that over 4,000 children died while at the schools. The shocking discoveries have continued. A week after leaders of Indigenous groups said that at least 600 bodies, mostly those of children, had been found in unmarked graves outside another shuttered residential school near Grayson, Saskatchewan, 182 more human remains were found near a another former church-run school in Cranbrook, B.C.

In March 2020, Bilozaze was as immersed as ever in that history of cultural erasure. She had just completed her master’s degree in education after studying the revitalization of Indigenous languages and the reclamation of native identities. Yet when she was awarded her degree, her diploma did not reflect her roots. She wanted it changed to her Indigenous name.

She met few who understood what reconciliation should look like

Bilozaze thought the commission’s call to establish a name reclamation policy would make the process easier.

Yet, at every step she described in getting her name changed, she found ignorance around reconciliation.

“Instead of just going and doing this work, I now have to educate people along the way,” she said.

Her first step began last September with a visit to get her fingerprints taken at the federal police station near her home in Comox Valley, British Columbia. A clerk asked her to explain why the fees should be waived for her application.

So Bilozaze pulled up documents on her phone and began teaching the clerk a history lesson.

“Then I went and I sat in my car and cried,” Bilozaze said.

She would go through nine months of delays, anguish and repeating her story. Altogether, application fees can run upward of hundreds of dollars. Eventually, through petitions, she managed to get most of the charges reimbursed.

By winter, her pursuit stalled. Her certificate of name change — the document she needed in order to make revisions on official IDs — was held up at the Land Title and Survey Authority. When the document did arrive in her mailbox three months later, it appeared singed and wrinkled — rendering it void.

“At that point, I’ve got nothing to prove who I am,” she said. Bilozaze’s Change of Name Certificate from the Land Title and Survey Authority of British Columbia arrived burnt and crumpled in the mail, rendering it void, she said. 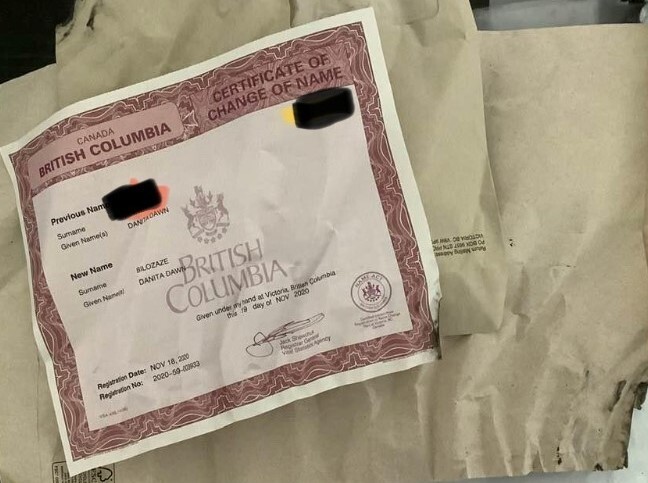 Bilozaze’s Change of Name Certificate from the Land Title and Survey Authority of British Columbia arrived burnt and crumpled in the mail, rendering it void, she said.

So she went through the process again. She proceeded to get her land title as well as her three university degrees changed to her Indigenous name.

Then came the passport. Instead of enjoying their spring break this year, the teacher and her daughter drove the three hours from their home in Comox Valley to a passport office in Victoria to get their names changed.

That’s where she met Samantha MacPhail, a supervisor at Service Canada’s Citizen Services Branch. For the first time in the entire process, Bilozaze says she started to see things turn around. An apologetic MacPhail gave Bilozaze’s application her full attention, Bilozaze said.

Following daily updates from MacPhail, Bilozaze finally got her official passport on May 26.

A harrowing journey offers a crash course on cultural sensitivity

MacPhail worked to ensure her colleagues could learn from Bilozaze’s experience. Bilozaze’s fight to legally change her name has provided a teaching opportunity for some 1,000 employees within Service Canada as a part of workplace training programs on reconciliation.

According to Immigration, Refugees and Citizenship Canada, Bilozaze is the first person in the country to have her fees waived to get her passport changed to reflect her Indigenous name. Her 15-year-old daughter, Dani, is the second. 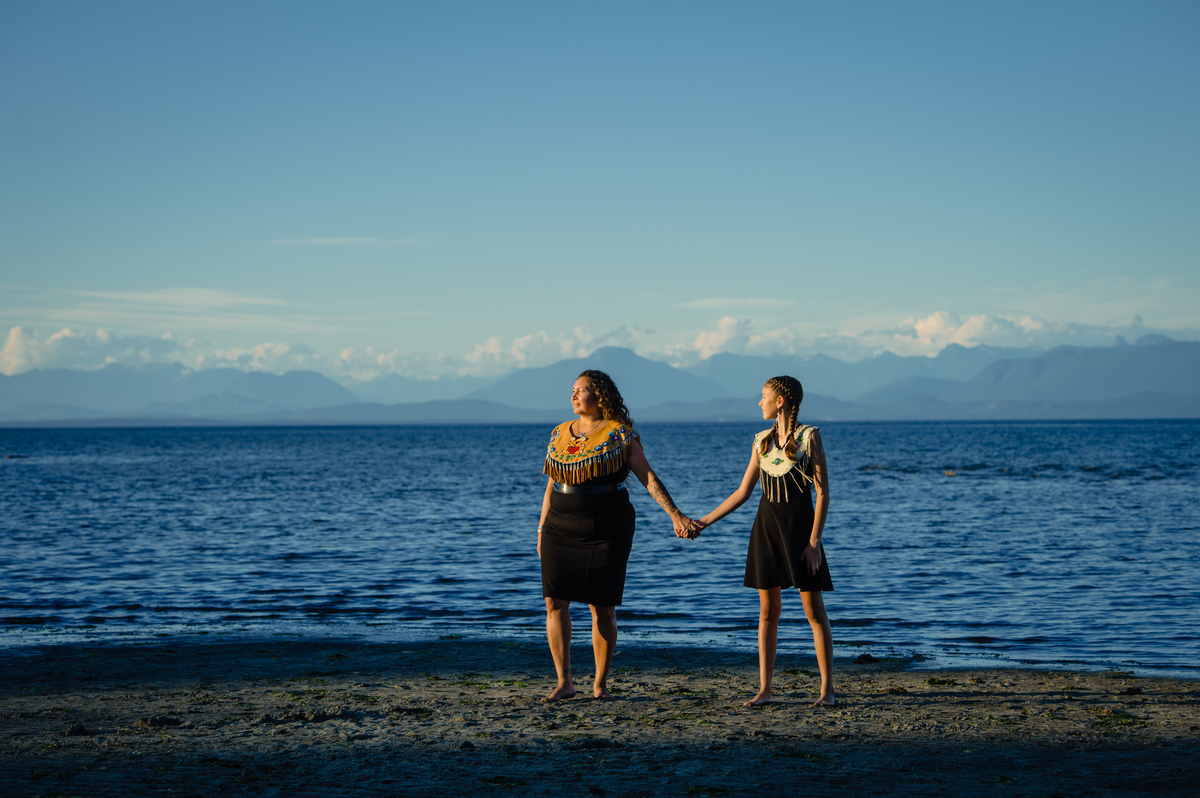 In an email last month, MacPhail thanked Bilozaze for letting her share her story, including on a call with leaders at the national level.

“Your story has continued to move others, both to tears and to action,” MacPhail wrote. “Because of your action and your bravery, Indigenous Canadians across the country will no longer walk into our offices and be met with a non-answer.”

Bilozaze said that other people in her Comox Valley community want to legally reclaim their names. “But of course, there’s fear,” she said on June 21, Canada’s Indigenous Peoples Day. “No one wants to have to push that hard.”

She’s a reluctant poster child in the protracted pursuit of Indigenous reconciliation. As Bilozaze said she told Service Canada when asked to share her experience: “If it’s going to help people like me, definitely use my story — only if it’s going to help those that are coming behind me to do the same thing.”