The hurricane center said as of 5 a.m. ET, Elsa was moving west-northwest at 14 mph with maximum sustained winds of 65 mph. Its center was located 85 miles east of Kingston, Jamaica.

Late Saturday, the storm battered parts of the Dominican Republic and Haiti with heavy rain and high winds as its center passed to the south.

Elsa is moving very near Jamaica and parts of eastern and central Cuba on Sunday, the hurricane center said, where tropical storm conditions are expected and hurricane conditions are possible later Sunday and at night.

The hurricane center issued a tropical storm watch late Saturday for the Florida Keys, from Craig Key westward to the Dry Tortugas. The watch means tropical storm conditions, including sustained winds of at least 39 mph, are possible within 48 hours.

By Monday, Elsa is expected to track across central and western Cuba and head toward the Florida Straits. Tropical storm conditions are forecast for portions of the Keys and southwestern Florida by Monday evening. Elsa is then forecast to move near or over portions of the west coast of Florida on Tuesday and Wednesday.

Some slight strengthening is possible Sunday as Elsa tracks through warmer waters, approaching the south-central coast of Cuba. However, gradual weakening is forecast to occur Sunday night and Monday when Elsa moves across Cuba. After the storm passes Cuba, it will track into the Florida Straits where some slight restrengthening is possible as it moves over the warm Gulf Stream. 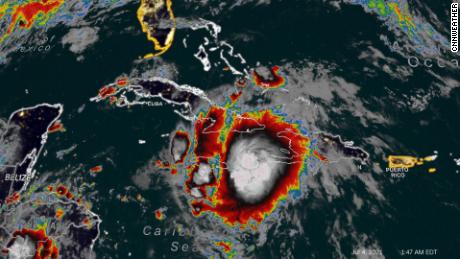 Florida Gov. Ron DeSantis issued a state of emergency for 15 counties on Saturday ahead of Elsa. He encouraged residents to begin preparation efforts, including stocking their disaster supply kits with a week’s worth of supplies and coming up with a disaster plan.

Elsa was a
Category 1 hurricane Friday and early Saturday, but was downgraded to a tropical storm late Saturday morning.

“An additional decrease in forward speed is expected … on Sunday, followed by a turn toward the northwest Sunday night or Monday,” the hurricane center said.

A tropical storm warning is in effect for the coast of Haiti north of Port Au Prince, the southern coast of Dominican Republic from Punta Palenque to the border with Haiti, 10 provinces in Cuba and for Jamaica. 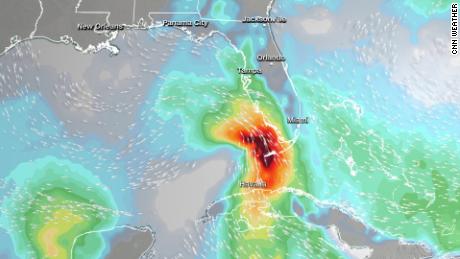 Heavy rain is expected in parts of Dominican Republic, Haiti and Jamaica through Sunday, with 4 to 15 inches possible, perhaps leading to scattered flash flooding and mudslides, according to the hurricane center.

The hurricane center said Elsa is forecast to move near Jamaica and portions of eastern Cuba on Sunday. Rainfall of 5 to 15 inches is possible over parts of Cuba from Sunday through Monday.

Significant flash flooding and mudslides are possible in Cuba, especially across the more mountainous regions.

The Cayman Islands also could receive 3 to 5 inches of rain Sunday through Monday, according to the hurricane center.

There was no loss of life or major injuries reported in Barbados after Hurricane Elsa passed through Friday, according to Prime Minister Mia Amor Mottley, speaking at a press conference Saturday.

“It could have been far worse, but it was bad enough, and certainly one of the more challenging events we’ve had to deal with in recent times with respect to climate,” the prime minster said.

Elsa’s path toward US coast is less certain

Based on the latest forecast track, Elsa could start bringing winds and rain to the Florida Keys and southwestern Florida by Monday night as a tropical storm. It then could track along Florida’s west coast early next week.

The hurricane center forecasts Elsa will bring 2 to 6 inches of rain to portions of the Florida Keys and southern Florida. 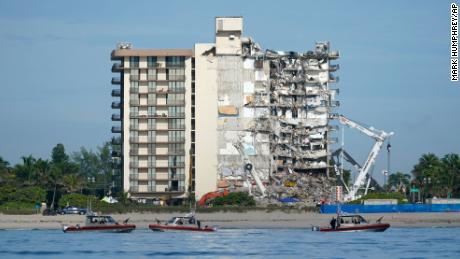 But even if the storm’s center tracks toward western Florida, the southeastern Florida community of Surfside is “still going to possibly see some impacts, even if it’s just some of the outer bands” of rain and wind by Tuesday or Wednesday, CNN meteorologist Tyler Mauldin said.

A crew could
demolish remaining units of a partially collapsed South Florida condo building in Surfside as soon as Sunday, officials said, racing against time as Elsa approaches the state.

The US Coast Guard has set
Port Condition X-Ray for the ports of Key West and Miami as Elsa approaches the Florida Peninsula,
according to a Coast Guard press release. The condition means that sustained gale force winds between 39 and 73 mph are expected within 48 hours and that vessels and port facilities must begin a series of preparations that are detailed in
federal regulations.

The ports remain open to commercial traffic but the Coast Guard warned that “drawbridges may not be operating if sustained winds reach 25 mph or when an evacuation is in progress.”

Elsa was the first hurricane of the 2021 Atlantic season, and the third named storm to pose a threat to the US coast.