Raids targeting illegal marijuana growing operations in the desert near Los Angeles saw the “historic” seizure of more than $1 billion of marijuana, though the amount is only a fraction of the illicit grows in the region, authorities said Wednesday.

Los Angeles County Sheriff Alex Villanueva said the proliferation of illegal marijuana farms in desert areas pose dangers, as many are tied to Mexican drug cartels and other organized crime groups.  Over the course of 10 days beginning June 8, Sheriff’s deputies, the Drug Enforcement Administration and other agencies seized more than 33,000 pounds of harvested marijuana plants, made 131 arrests and seized 65 vehicles in the Antelope Valley, north of Los Angeles.

In addition, 30 locations were demolished and 180 animals were rescued. Armed groups run the illegal operations in multiple greenhouses and operations have expanded during the coronavirus pandemic, officials said. 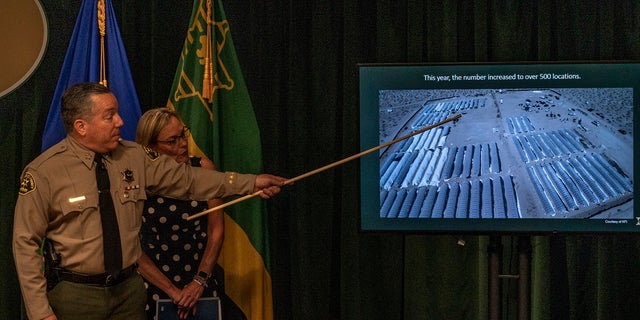 Los Angeles County Sheriff Alex Villanueva, and Los Angeles County Supervisor Kathryn Barger stand in front of confiscated firearms, as he points to a picture of some 500 illegal pot operations at a news conference downtown Los Angeles Wednesday. Authorities seized tens of millions of dollars worth of illegal marijuana grown in the high desert as part of an effort to curtail the black market’s grip on Southern California. (AP Photo/Damian Dovarganes)

“What we want to do is send a clear and loud message to the cartels and anyone doing operations in the high desert: ‘Your days are over and we’re coming for you,'” Villanueva said during a news conference.

He said the operations demolished 205 illegal grows, totaling around 40% of the 500 seen in aerial surveillance. Last year, only 150 illegal grows were identified in the Antelope Valley, he said. Many more exist in other nearby counties.

“This issue is plaguing the Antelope Valley and has the potential to spread throughout Los Angeles County,” said county Supervisor Kathryn Barger.

The illegal pot farms also threaten local residents and farmers and toxic chemicals such as pesticides have also threatened water supplies amid an ongoing drought, the sheriff said.

“The amount of trash, debris, the pesticides, the chemicals that are used go right into the environment, gets into the food chain, affects all our wildlife, our critters,” he said. “The trash is strewn for miles and the wind carries it throughout the desert and the impact of it is incalculable.”

Officials sought to differentiate between the Antelope Valley operation and the legal market.

“This is not a war on the legal cannabis business in California,” said Rep. Mike Garcia, R-Calif., who represents the area.