Nearly the entire state of California will be impacted by this heat wave, in addition to major metro areas in the Southwest. Numerous daily temperature records will be broken and some all-time records may also be in jeopardy.

“High pressure will continue to dominate the southern Great Basin and Mojave Desert, producing a major heat wave into early next week,” the National Weather Service (NWS) office in
Las Vegas said. “All-time record high temperatures will be rivaled or exceeded in some areas.”

While the Southwest may be known for its hot temperatures, these numbers are extreme.

A “Very High” heat risk, the highest level (4 of 4), has been issued for much of California, Nevada, Arizona and Utah. This includes cities such as Sacramento, Bakersfield and Palm Springs, California, Las Vegas and Phoenix.

“Very High” simply means that the entire population, not just elderly or people who are ill, will be at a very high risk of heat-related illness due to the long duration of heat and the lack of overnight relief.

Utah’s current state temperature record is 117 degrees. The town of St George may meet or exceed that record on Saturday.

Las Vegas has the potential to set a new all-time high temperature record this weekend. The current all-time high is 117 degrees and the National Weather Service is forecasting at least that temperature for Saturday and Sunday.

Sacramento also has the chance to break their all-time high temperature of 114 degrees this weekend.

Death Valley, California,
hit a high of 130 degrees on Friday, coming close to the hottest temperature ever recorded on the globe — 134 degrees at the same location in 1913. 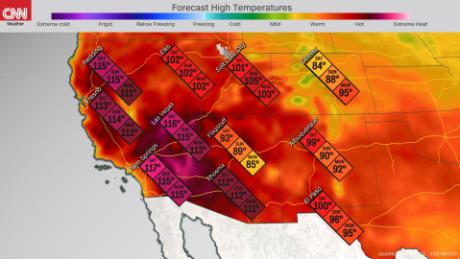 This is a problem because these temperatures don’t allow the body to successfully cool down at night. The temperature needs to drop to at least 80 degrees for recovery to begin. In fact, a person can lose up to 2 liters of fluid overnight through sweating if the temperature doesn’t drop below 85 degrees.

On Thursday, the California Independent System Operator (ISO) said in a press release that “extreme temperatures across much of California” may lead to a “potential capacity shortfall on the state’s electric grid.”

Residents were told to voluntarily conserve electricity between 4 p.m. to 9 p.m. on Friday to “ease the strain on the grid during the crucial evening hours when solar energy is diminished or no longer available.”

The concern is that since the extreme heat is expected to continue through the weekend, that demand will exceed supply. California ISO warned that if this happens, rotating power outages will be implemented.

This comes after record-breaking heat in June. 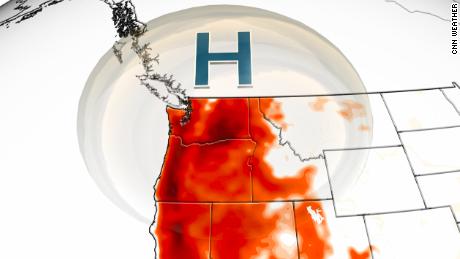 A little over 15% of the United States observed all-time record high temperatures last month, the highest NOAA has ever reported.

All-time records were set in the Northwest on June 27 and 28, including state records in Washington and Oregon. Scientists reported this week that the late-June heat wave in the Pacific Northwest would have been “virtually impossible” without the effect of human-caused climate change.

With even more all-time records potentially being broken this weekend, the concern is whether the power grid will be able to keep up with demand.