Thousands of people marched in Paris and other French cities Saturday for a fourth consecutive week of protests against the COVID-19 health passes that everyone in the country will need shortly to enter cafes, trains and other venues.

The demonstrations came two days after France’s Constitutional Council upheld most provisions of a new law that expands the locations where health passes are needed to enter.

Starting Monday, the pass will be required in France to access cafes, restaurants, long-distance travel and, in some cases, hospitals. It was already in place for cultural and recreational venues, including cinemas, concert halls, sports arenas and theme parks with a capacity for more than 50 people. 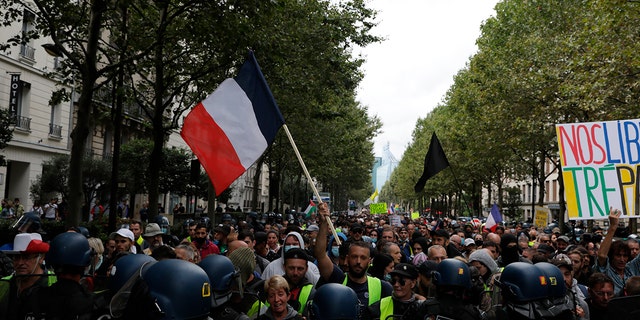 With French riot police on guard, a largely peaceful crowd walked across Paris carrying banners that read: “Our freedoms are dying” and “Vaccine: Don’t touch our kids.” Some were also upset that the government has made COVID-19 vaccines mandatory for health care workers by Sept. 15.

Dozens of street protests took place in other French cities as well, including Marseille, Nice and Lille. The French Interior ministry said there were 237,000 protesters nationwide, including 17,000 in Paris. 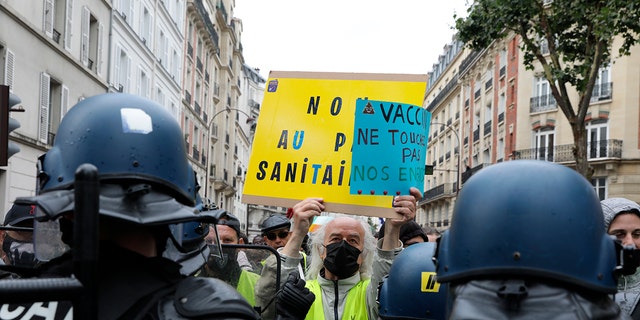 Polls, however, show that most people in France support the health passes, which prove that people are vaccinated, have had a negative recent test or have recovered from COVID-19. 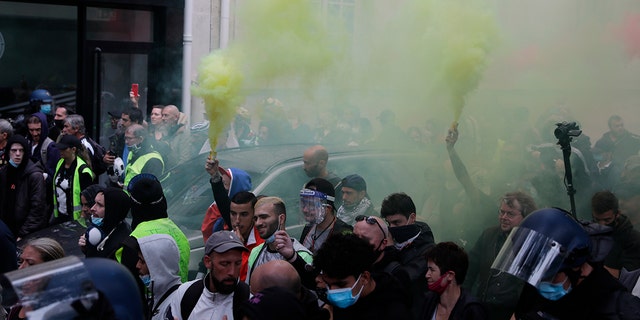 Anti-vax protester holds a flare during a protest against the vaccine and vaccine passports, in Paris, France, Saturday Aug. 7, 2021.
(AP Photo / Adrienne Surprenant)

Muriel, 55, a Parisian who declined to give her last name, told The Associated Press that she especially protests “the disguised mandatory vaccination … it’s an incredible blow to our fundamental freedoms.” 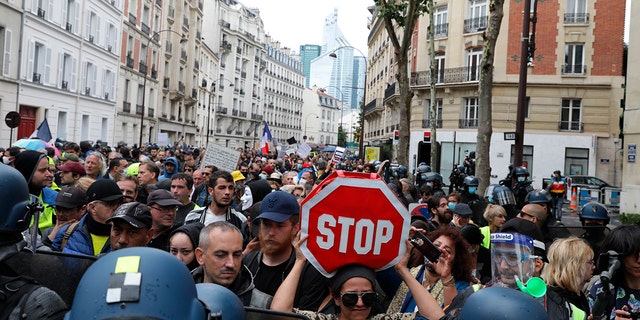 Anti-vax protesters gather to protest against the vaccine and vaccine passports, during a demonstration in Paris, France, Saturday Aug. 7, 2021.
(AP Photo / Adrienne Surprenant)

“Here, you don’t have COVID, but you have rage!” Philippot told the crowd, calling for a boycott of places requiring the pass.

In Reunion Island, a French territory in the Indian Ocean that is under a partial lockdown amid a surge in infections, thousands turned out to protest the virus pass. 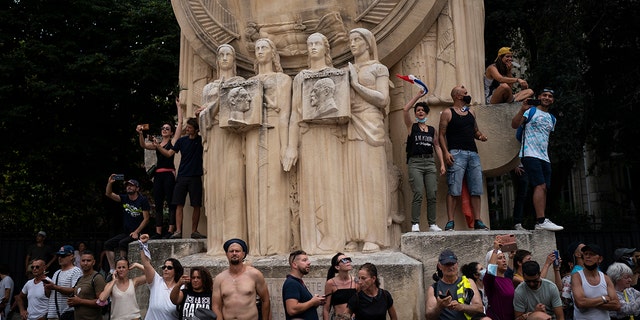 EIFFEL TOWER REOPENS; COVID PASSES REQUIRED AS OF NEXT WEEK

France is registering over 21,000 new confirmed virus cases daily, a steep climb from a month ago. More than 112,000 people with the virus in France have died since the pandemic began.

Over 36 million people in France — about 54% of the population — are fully vaccinated. At least 7 million have gotten their first vaccine shot since Macron announced the health pass requirement on July 12.

A growing number of European countries have implemented virus passes, each with different rules.