Washington (CNN)Senate Judiciary Chairman Dick Durbin said Sunday that former acting Attorney General Jeffrey Rosen revealed in testimony this weekend “frightening” information about what had occurred at the Justice Department during the waning days of the Trump administration.

“He told us a lot, seven hours of testimony. And I might quickly add: this was done on a bipartisan basis — Democratic staff and Republican legal staff asking questions during this period of time,” Durbin, a Democrat from Illinois, told CNN’s Dana Bash on “State of the Union” of the panel’s interview with the former DOJ official.
“It really is important that we ask these questions, because what was going on in the Department of Justice was frightening from a constitutional point of view,” he added. “To think that (former Attorney General) Bill Barr left, resigned after he announced he didn’t see irregularities in the election, and then his replacement was under extraordinary pressure — the President of the United States, even to the point where they were talking about replacing him, that pressure was on.”
Rosen and Richard Donoghue, the acting deputy attorney general from late December 2020 until the end of former President Donald Trump’s term, provided to the panel detailed accounts of a tumultuous period in late December and early January during which a senior Justice Department lawyer sought to deploy the department’s resources in support of false voting fraud claims by Trump, according to a source familiar.
Pressed by Bash on what Rosen revealed during his testimony to the Senate committee, Durbin said he couldn’t yet divulge any details, but that “ultimately, there will be a report.” 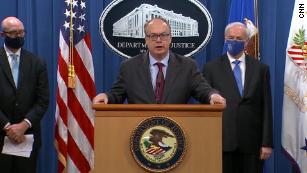 Interviews with former Justice Department officials provide new details on Trump efforts to undermine election results
Rosen met with the committee for more than six hours on Saturday, while Donoghue met with them for about five hours Friday, the source said, adding that Rosen also sat with the Justice Department Inspector General’s investigators Friday.
Rosen spoke of numerous interactions with Jeffrey Clark, a Trump-appointed environment law chief at the DOJ, but much of the focus of his testimony was on five episodes in which Clark went out of the chain of command to push the fraud claims. That included the January 3 White House meeting where Trump had the two men vie for the attorney general’s job before deciding not to replace Rosen with Clark.
Asked by Bash whether Trump tried to get Rosen to overturn election results, Durbin replied: “It was not that direct, but he was asking him to do certain things related to states’ election returns, which he refused to do.”
“He was being asked by the White House, the leadership in the White House, to meet with certain people who had these wild, bizarre theories of why that election wasn’t valid. And he refused to do it,” the chairman said.
Both Rosen and Donoghue told the investigators that they don’t know whether Clark was acting at Trump’s behest or orchestrating a plot he concocted himself. The men testified that in their interactions with Trump, he didn’t order them to do anything illegal and eventually accepted their advice that the Justice Department couldn’t take actions to claim fraud when it had no evidence of it.
Durbin’s committee had previously reached out to Clark for an interview, even before Rosen and Donoghue spoke with its members, and his team is still in discussions with the panel, according to a person familiar with Clark.
The senator told Bash on Sunday that he would like for Clark to testify but said he’s not sure the lawyer would be willing to be interviewed.
“We’re going to do our best to ask Mr. Clark to come in and tell the story from his point of view,” Durbin said. “(Attorney General) Merrick Garland has opened the door and said, ‘We’re waiving all privilege here.’ So he may decide for personal reasons or other reasons he doesn’t want to testify. But I hope he will.”
This story has been updated with additional reporting.

CNN’s Evan Perez and Katelyn Polantz contributed to this report.