Latest News
Home /Naomi Osaka pauses press conference in tears after exchange with reporter – CNN
Following those questions, Osaka was in the midst of being asked about preparation for the summer hard court portion of the season and her reaction to what is going on in Haiti following a
devastating earthquake. Osaka’s father is a Haiti native, and the tennis superstar said in a tweet Saturday she would
give prize money she earns at the Western & Southern Open to Haiti relief efforts.

It was during that portion of the session that Osaka began to wipe her face and pulled her hat down over her eyes. A reporter said, “Sorry,” as Osaka got emotional, to which Osaka replied, “No, you’re super good.”

With Osaka crying, the moderator said they would take a quick break. After a few minutes, Osaka returned to finish the session. She apologized for walking out.

Before this unfolded, Osaka got into an exchange with
Paul Daugherty, a reporter from the Cincinnati Enquirer who said, “You’re not crazy about dealing with us, especially in this format. Yet you have a lot of outside interests that are served by having a media platform.”

Following the exchange, Daugherty
published a column in which he noted that “in the Zoom format, there’s no room for discussion or nuance,” adding he wasn’t sure whether Osaka understood the question or if it made her uncomfortable. But he praised her response, calling it “honest, thoughtful. . . and unlike any answer I’ve ever gotten in 34 years covering sports in Cincinnati.”

Prior to the Olympics, Osaka’s last time competing was at the French Open in May. Before the start of that tournament, the four-time major champion and world No. 2 said she would not be doing press conferences — knowing she would get fined — citing her mental health.

After a statement from all four major tournaments — the Australian Open, the French Open, Wimbledon and the US Open — that threatened further punishment, including default from the tournament, Osaka withdrew, revealing she had “suffered long bouts of depression” since winning her first major title in 2018.

‘I’m figuring it out at the same time as you’

After answering back-to-back questions regarding news conferences, this is the exchange that occurred between columnist Daugherty and Osaka:

Daugherty: “You’re not crazy about dealing with us, especially in this format. Yet you have a lot of outside interests that are served by having a media platform. I guess my question is how do you balance the two? And also do you have anything you’d like to share with us about what you did say to Simone Biles?” (Earlier in the press conference, Osaka said she had sent a message to Biles but said she wanted to give her space, “because I know how overwhelming it can feel.”)

Osaka: “When you say I’m not crazy about dealing with you guys, what does that refer to?”

Daugherty: “Well, you’ve said you don’t especially like the press conference format, yet that seems to be obviously the most widely used means of communication to the media and through the media to the public.”

Osaka: “That’s interesting. I would say the occasion, like when to do the press conferences what I feel is the most difficult.”

Osaka then paused, saying she was thinking. The moderator suggested moving on and asked Osaka if she wanted to take the next question.

Osaka: “No. I’m very actually interested in that point of view. So if you could repeat that, that would be awesome.”

Daugherty: “The question was that you’re not especially fond of dealing with the media, especially in this format. You have suggested there are better ways to do it, that we’d like to try to explore that. My question, I guess, was you also have outside interests beyond tennis that are served by having the platform that the media presents to you. My question is how do you think you might be able to best balance the two?”

Osaka: “I feel like this is something that I can’t really speak for everybody. I can only speak for myself, but ever since I was younger I’ve had a lot of media interest on me, and I think it’s because of my background as well as how I play. Because in the first place I’m a tennis player. That’s why a lot of people are interested in me. 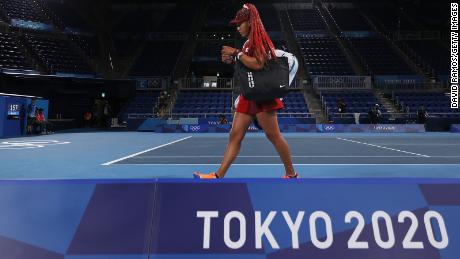 “I would say in that regard I’m quite different to a lot of people. I can’t really help that there are some things that I tweet or some things that I say that kind of create a lot of news articles or things like that. I know it’s because I’ve won a couple grand slams and I’ve gotten to do a lot of press conferences where these things happen.

“But I would also say I’m not really sure how to balance the two. I’m figuring it out at the same time as you are I would say.”

After that, while Osaka was receiving the next set of questions from a tennis journalist regarding preparation and Haiti did Osaka show visible emotion.

Osaka’s agent, Stuart Duguid, said in a statement: “The bully at the Cincinnati Enquirer is the epitome of why player / media relations are so fraught right now. Everyone on that
Zoom will agree that his tone was all wrong and his sole purpose was to intimidate. Really appalling behavior. And this insinuation that Naomi owes her off court success to the media is a myth — don’t be so self-indulgent.”

‘There’s people that I don’t know that well that ask me really, really sensitive questions’

Before the exchange with Daugherty, a reporter asked Osaka if there was any advice she could give reporters on how they can help make it a better experience for athletes going through difficult losses and moments while asking questions during press conferences.

“For me, I feel like most of the time — this is just me as a person — I’m pretty open when it comes to press conferences,” Osaka said. “I feel like I’ve been that way my whole life. There are times where I would say there’s people that I don’t know that well that ask me really, really sensitive questions. And then especially after a loss, that kind of amplifies a bit. 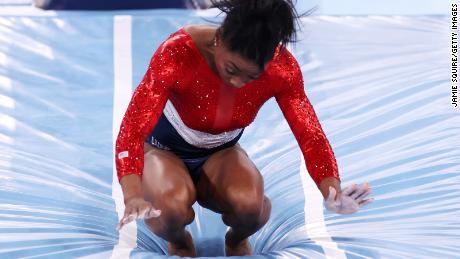 “I would say like even repetitive questions, like questions we’ve been asked before, but maybe you guys weren’t there at the previous press conference. Just like maybe read transcripts. I’m not a professional in press conferences or anything, but, just to make it a bit more of a friendlier experience, I would say.”

She also gave the suggestion of a player taking a “sick day.”

“We get fined if we don’t do press conferences but sometimes we feel really sad,” Osaka said. “I feel like maybe there should be a rule that we could maybe take a sick day from that and maybe respond to you guys in emails and things like that. I feel like it would be kind of fair but then again I’m only speaking from my side and I don’t know how your guys’ whole (referencing the media) — I guess maybe you want to capture us when we’re straight off the court as well, so I’m not sure what’s fair.”

Regarding Haiti, Osaka said, “It’s really scary. I see the news every day. Honestly, the earthquake was kind of close to my parents’ school there. I’m honestly not really sure how that’s doing, and I haven’t seen any pictures or video of it yet.”

At the 2020 Western & Southern Open — held at the USTA Billie Jean King National Tennis Center in New York instead of the Cincinnati area — Osaka was the runner-up after withdrawing because of a hamstring injury. She would go on to win the US Open.