Latest News
Home /Child Covid-19 cases are steadily increasing. But with schools opening, expert warns this is just the beginning – CNN
“This is happening before school starts. Schools are opening now,” said Dr. Peter Hotez, dean of the National School of Tropical Medicine at
Baylor College of Medicine. “So, Houston Independent school district opens August 23, that’s going to be a huge accelerant. This is just the beginning, unfortunately,” he told
CNN’s Jake Tapper.

And with the more transmissible Delta variant accounting now for nearly 99% of cases in the US, the situation is growing particularly dangerous for children, experts said.

They have advocated for children to wear masks in school, but some governors have attempted to ban such requirements.

“Why tie the hands of the public health officials behind their backs? You have two weapons here, one is vaccines the other is masking, and for children less than 12 that’s the only weapon they have,” Dr. Paul Offit, a member of the US Food and Drug Administration’s vaccine advisory committee, told
CNN’s Erin Burnett.

Hotez said the US is now at a “screaming level of virus transmission,” adding that to really interrupt the spread, 80 to 85% of the population will need to be vaccinated.

“We know from past epidemics what that means, the best way to do this is to vaccinate your way out of it in collaboration with masks,” Hotez said. “We can’t be either, or — the only way we are going to defeat this virus is with both.”

Many schools that have gone back to campus are already seeing the impact of the virus’ spread. 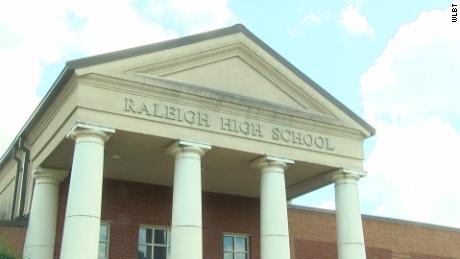 More than 3,000 students and employees have been quarantined in the New Orleans Public School District due to Covid-19 cases in the last week, according to the district’s latest tally.

They represent 5.89% of the students and teachers in the district.

Students returned to the New Orleans Public School District on August 12 and are required to wear masks in school facilities, according to the district.

Mask mandates have c
aused tension in Florida as some schools press to implement them but are going up against Gov. Ron DeSantis’ ban against such requirements.

Among the state’s 15 largest school districts, at least 3,143 students and 1,371 employees have tested positive for Covid-19 and at least another 11,416 students and staff members have been quarantined or isolated due to Covid-19.

The tallies do not include any cases from the two biggest school districts in Florida — Miami-Dade and Broward — which have not yet returned to school. Broward County Schools begin in-person learning on Wednesday and Miami-Dade begins on August 23.

On Tuesday, Florida’s State Board of Education voted unanimously to recommend investigations into the Broward and Alachua districts over their requirement for mask-wearing in school.

In Arizona, Gov. Doug Ducey said the state would use federal Covid relief money to increase the funding available to public school districts only if they’re open for in-person learning and don’t require children to wear masks.

A handful of Arizona districts have imposed mask mandates despite the state law that prohibits them, arguing that the ban cannot go into effect
until mid-September at the earliest, making their current mandates legal. 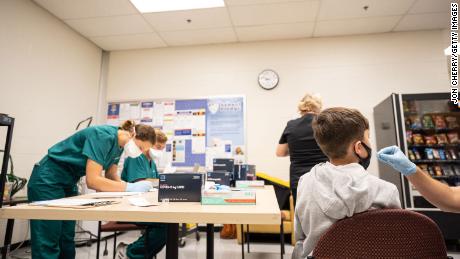 Hospital stress ‘will get worse’

As cases spread, crowding in hospitals has been on the rise as well.

Florida currently has 16,521 individuals hospitalized with Covid-19, making up 36.1% of all patients in Florida hospitals, according to an update released by the Florida Hospital Association on Tuesday. 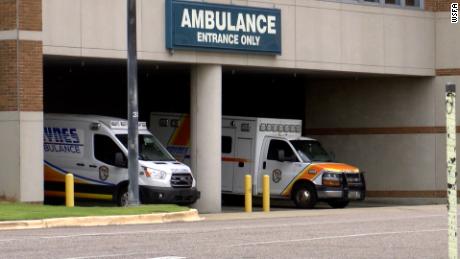 “There can be no question that many Florida hospitals are stretched to their absolute limits,” said Mary C. Mayhew, President and CEO, of the association.

Three quarters of Florida hospitals are expecting critical staffing shortages in the next seven days, she said in a statement.

In Kentucky, Gov. Andy Beshear said that by the end of the week, “we expect to have more Kentuckians in the hospital battling Covid than at any point in this pandemic.”

He added: “The situation is serious and alarming, and we are rapidly approaching critical.”

States to the south of Kentucky are quickly running out of beds and calling hospitals in the state asking to transfer ICU-level care patients, Kentucky’s Public Health Department Commissioner Dr. Steven Stack said.

“This will cascade and it will get worse,” Stack said.

Boosters will not end the pandemic, expert says

Health experts have been discussing the possibility of a booster dose to increase protection — although there is no consensus about when it will be needed.

The Biden administration is expected to discuss data Wednesday showing that Covid-19 vaccine boosters may be needed for the general population around eight months after becoming fully vaccinated.

The CDC said Tuesday that the need for and timing has not yet been determined. And the FDA, in response to CNN, said that agencies are engaged in a rigorous process to consider when boosters might be necessary.

“This process takes into account laboratory data, clinical trial data, and cohort data — which can include data from specific pharmaceutical companies, but does not rely on those data exclusively,” spokesperson Abigail Capobianco said. “We continue to review any new data as it becomes available and will keep the public informed.”

Offit told CNN the process was frustrating. “You would like to think that the data would come first and then the recommendation would come second, because right now, we’re all guessing what’s going on.” 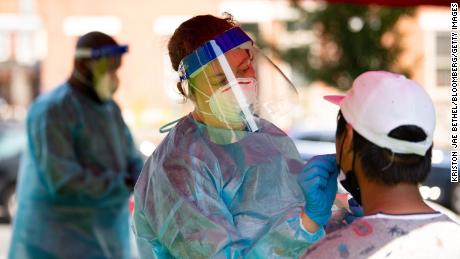 Scott Hensley, an immunologist at the University of Pennsylvania, told CNN he is skeptical of the importance of boosters at this point in the pandemic.

“If you think a third dose of the vaccine is going to end the pandemic, then you are kidding yourself,” he told CNN. “The way to end this pandemic is to get the vaccine distributed across the globe.”

Andy Slavitt, the former White House Covid-19 adviser, said Tuesday it will make an enormous difference if most of the world can be vaccinated in the first part of 2022.