In a brief order the court said it would hear arguments in the case sometime in October or November. The execution had been scheduled for 6 p.m. CT.

Prison policies concerning the presence of spiritual advisers have divided the justices in past cases, pitting claims of religious liberty against prison security policies.

John Ramirez argues that the prison policy, which allows his pastor to be present in the chamber, but prohibits him from physically touching Ramirez or speaking up, violates Ramirez’ rights under the federal Religious Land Use and Institutionalized Persons Act of 2000, meant to protect religious liberty.

Ramirez was convicted of robbing and murdering Pablo Castro in 2004 after stabbing him 29 times in a convenience store parking lot. He also robbed a second victim at knifepoint and fled to Mexico, evading arrest for three and a half years, according to the Texas attorney general’s office.

Ramirez has been ministered by Rev. Dr. Dana Moore of the Second Baptist Church in Ramirez’s hometown of Corpus Christi, Texas. 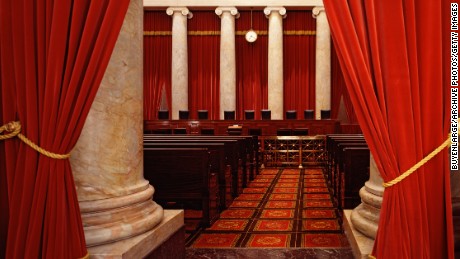 In court papers his lawyer, Seth Kretzer, said that Moore may “not pray, speak, read Scripture, move his lips, or do anything at all.” Instead, he must “stand in his little corner of the room like a potted plant even though his notarized affidavit explains that laying his hands on a dying body- and vocalized prayers during the transformation from life to death- are intertwined with the ministrations he seeks to give Ramirez as part of their jointly subscribed system of faith.”

“What the Respondents really seek is to hold a Sword of Damocles over Pastor Moore during this execution,” Kretzer said, adding that if Moore does speak up he will be “ejected from the execution chamber.”

Following the court order, Kretzer said in a statement that he “welcome(s) this fight in the Supreme Court in the weeks ahead.”

“The greatness of the First Amendment is that (it) applies in the halls of power- and also in the hell of an execution chamber,” he said in part, adding that “the State of Texas knows their policy is not Constitutional.”

Paxton said that after the Supreme Court issued orders in related disputes, Texas changed its policy to allow spiritual advisers in the execution chamber. Only after that did Ramirez amend his complaint to say he wanted his spiritual advisor to be able to lay hands on him during the execution and pray audibly.

“The courts below properly recognized that prisons have a compelling interest in maintaining an orderly, safe, and effective process when carrying out an irrevocable, and emotionally charged, procedure,” Paxton wrote.

A divided federal appeals court allowed the execution to go forward, over the dissent of one judge who said that the execution should be blocked to give the courts time to consider the claims.

“What purpose is there for allowing a spiritual advisor, like a pastor, to be present in the execution chamber if that pastor is prohibited from attending to the spiritual needs of the condemned during the final moments of his life,” Judge James L. Dennis of the 5th US Court of Appeals wrote in dissent.

In February, the Supreme Court
blocked the execution of an Alabama inmate because the prison would not allow his spiritual adviser to be present in the execution chambers. Justice Elena Kagan, joined by her liberal colleagues, Justices Sonia Sotomayor and Stephen Breyer, as well as conservative Justice Amy Coney Barrett, wrote that while prison security was a compelling state interest, the prison could have ensured safety without barring all clergy. Justice Brett Kavanaugh, joined by Chief Justice John Roberts, would have allowed the execution to go forward, but said that going forward “it seems apparent” that states should figure out ways to allow spiritual advisoes in the execution room to avoid litigation delays. Neither Justice Neil Gorsuch nor Samuel Alito revealed how they would have voted, but it would have taken five votes to block the execution.

Ramirez’s case takes the issue a step further concerning what a spiritual adviser is allowed to do while in the chamber.

The Becket Fund for Religious Liberty, a group dedicated to religious freedom rights, filed a friend of the court brief in support of Ramirez.

“The right of a condemned person to the comfort of clergy — and the corresponding right of clergy to comfort the condemned — are among the longest-standing and most well-recognized religious exercises known to civilization,” Becket Fund Lawyer Eric Rassbach argued.

This story has been updated with additional developments Wednesday.