letter as the ranking member of January 6 committee

(CNN)GOP Rep. Jim Banks lamented on the House floor that House Speaker Nancy Pelosi prevented him from serving on the House committee investigating the January 6 attack on the US Capitol on Thursday.

And yet, Banks sent a letter to at least one government agency falsely claiming that he is ranking member of the committee in his signature. 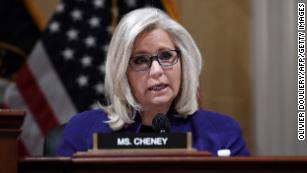 Cheney goes after her own party in House debate on Bannon contempt resolution
Fellow Republican Liz Cheney, who serves as vice chair of the committee, called Banks out for his actions on the House floor as the House began debate on the criminal contempt referral of Steve Bannon, a Trump ally, for evading a subpoena.
“He noted that the Speaker had determined that he wouldn’t be on the committee” Cheney said. “So I would like to introduce for the record a number of letters the gentleman of Indiana has been sending to federal agencies.”
According to a letter provided to CNN, Banks wrote to the Department of the Interior on September 16 asking to be provided with any information the department turns over to the House committee.
“I ask that you provide me any information that is submitted to the Select Committee. Additionally, please include me on any update or briefing that you provide,” Banks wrote.
Banks signed the letter as ranking member of the committee, while admitting that Pelosi blocked his appointment.
The letter reads: “The House Republican Leader Kevin McCarthy appointed me to serve as the Ranking Member of the Select Committee. Yet, House Speaker Nancy Pelosi refused to allow me to fulfill my duties as Ranking Member.”
Banks’ letter to the Department of the Interior came after the committee investigating January 6 sent requests of documents to multiple government agencies in their efforts to make progress in their investigation.
A spokesman for Banks did not address that the lawmaker signed the letter as ranking member in a statement to CNN when rebutting the characterization that Banks misrepresented his position.
“The letter clearly states that Rep. Banks was refused the opportunity to fulfill his duties as Ranking Member,” the spokesperson said.
“This is a bizarre Democrat narrative meant to distract from the actual contents of Rep. Banks’ letter and to avoid talking about the actual activities of the Select Committee, which are partisan, authoritarian and indefensible.”
Banks was initially selected by Minority Leader Kevin McCarthy to serve on the committee, but Pelosi rejected Banks along with GOP Rep. Jim Jordan from serving in July. McCarthy then pulled all five Republican nominees he had tapped for the panel.
Democratic Rep. Jamie Raskin of Maryland, who serves on the select committee, suggested Banks’ posing as ranking member of the committee could break House rules.
“That’s not only delusional and fantastical, but it might be some kind of violation of the rules of the House,” Raskin said.
Original Source