The UK Met Office leveraged its 2.2 km resolution UK Climate Projection model to analyze future rainfall events. It is the first time internationally researchers have used a climate model at a resolution on a par with operational weather models for national climate scenarios.

Researchers found through the high-resolution model that impacts of extreme rainfall could be more frequent and severe due to climate change than had previously been thought.

The study comes as global leaders convene in Glasgow, Scotland, for COP26 to discuss strategies for curbing greenhouse gas emissions in hopes of slowing human-induced warming, which is increasing at an alarming rate.

The study narrows in on the COP26’s host city, as well as London.

It shows the number of days with 30 mm of rain or more per hour (when the United Kingdom issues flash flood warnings) is 3.5 times more likely in Glasgow by the year 2070 when compared to 1990, if warming runs unchecked and the global temperature reaches 3 degrees Celsius above pre-industrial levels, and 2.5 times more likely in London. 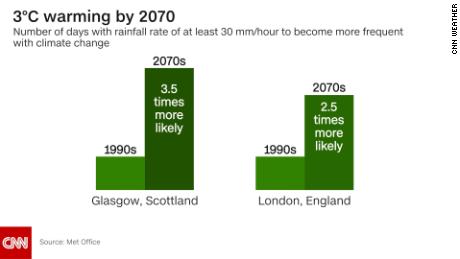 Researchers also calculated the odds of 80 mm of rain or more within 24 hours in Glasgow to be 4.5 times as likely under the same scenario. They attributed this to more frequent, slower-moving and more moisture-rich storm systems impacting the UK becoming more commonplace in the decades to come due to a warming planet.

The Intergovernmental Panel on Climate Change (IPCC) says the planet’s temperature has reached nearly 1.2 degrees Celsius above pre-industrial levels and warns anything above 1.5 degrees Celsius will have detrimental impacts.

The impacts are already being felt.

Professor Peter Scott, science fellow in climate attribution at the Met Office Hadley Centre, warns that “climate change is no longer just an issue about the future.”

And with it comes a mixed bag of dangerous weather. Within the last two years alone, the world has witnessed events such as:

However, these events are becoming more frequent and intense, and every continent and country around the globe is beginning to see the fingerprint of climate change.

The IPCC’s August AR6 report sheds light on this by definitively linking the number of weather and climate extremes to greenhouse gas emissions and warming temperatures.

The main culprit for increased emissions and temperatures is the electricity sector. 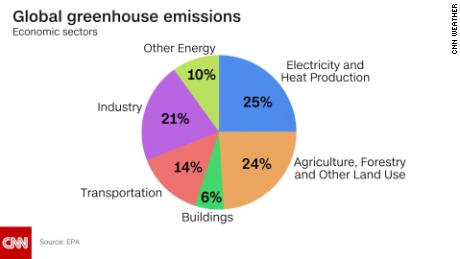 Though climate change studies may sound bleak, lead author of AR6 and professor of Earth and Atmospheric Sciences at the Georgia Institute of Technology, Dr. Kim Cobb, tells CNN that “all is not lost.”

Cobb says if we enact emissions reductions this decade, we can limit warming to 1.5 degrees Celsius and mitigate climate-fueled extreme weather impacts by the turn of the century, but action is needed immediately.

The novel UKCP model currently only runs projections for the UK. But in theory, it could be applied to other regions of the world depending on computing capacity and data observations to help decision makers develop more strategic actions against climate change.