With thousands of migrants stranded on the Polish-Belarusian border and international pressure mounting to end the volatile standoff on the doorstep of the European Union, several airlines took steps on Friday to limit people from the Middle East from flying to Belarus.

The goal was to prevent migrants from making their way to the border of Poland, an E.U. country, where they are stranded in freezing conditions in what aid groups say is a deepening humanitarian crisis.

Western European officials have accused Belarus’s autocratic leader, Aleksandr G. Lukashenko, of orchestrating the passage of migrants into his country and then to the border. The officials say he is essentially using the migrants as weapons to retaliate against the E.U. for imposing sanctions after he claimed victory in a disputed 2020 election.

At the same time, Russia, a crucial ally for Mr. Lukashenko, sent mixed signals regarding its stance on Belarus’s actions. The Kremlin undermined Mr. Lukashenko’s threat to cut off the flow of natural gas through his country to Western Europe, saying Russia would fulfill its commitment to provide gas to the E.U.

“Russia was, is and will remain a country that fulfills all of its obligations in supplying European customers with gas,” Dmitri S. Peskov, the spokesman for President Vladimir V. Putin, said on Friday. “The reliability of Russia as a supplier and a partner on current and future contracts is not in doubt.”

But it also flexed its military might in a show of continuing solidarity with a country it has steadfastly backed since the migrant crisis intensified this week. On Friday, a subdivision of Russian paratroopers flew to Belarus from Russia aboard military transport planes and landed in the Grodno region, near the Polish border, for exercises with Belarusian troops, the Russian Defense Ministry said.

The ministry said the “surprise combat readiness check” came on the heels of two days of patrols of the Polish border region by nuclear-capable Russian bombers. 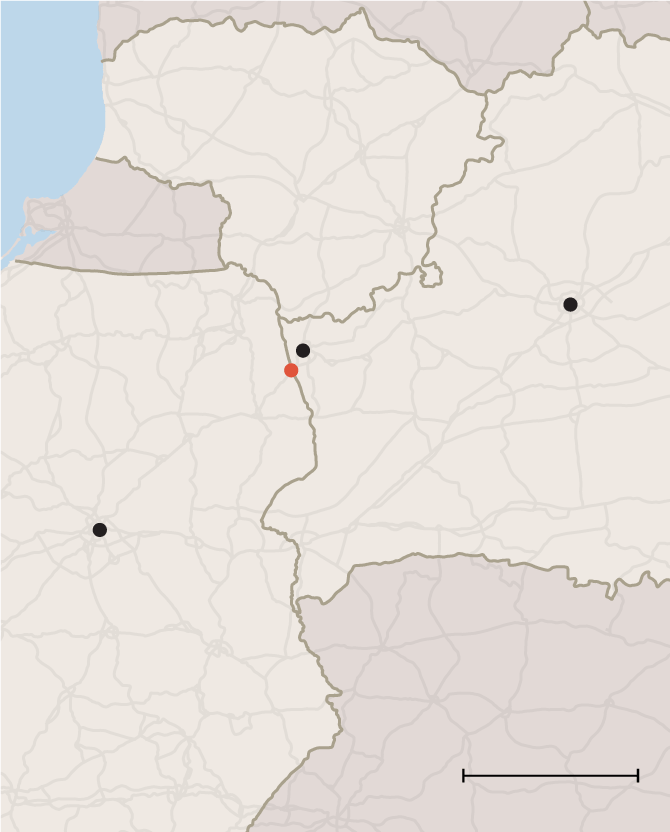 One of the more striking aspects of the crisis is the way migrants have made their way to the border — flying to Belarus, often with the assistance of travel agents, and then moving to the border in large groups under the watch of the Belarusian security apparatus.

But under pressure from the E.U., Turkish Airlines announced that it was suspending sales of one-way tickets to Minsk, one of several airlines on Friday that moved to restrict travel to the country. .

The Belarusian airline, Belavia — which operates joint flights with Turkish Airlines from Istanbul — also announced that Iraqi, Syrian and Yemeni citizens would no longer be allowed to board flights to Belarus.

Access for journalists along the border has been restricted by all the nations involved, making it difficult to independently assess the scale of the humanitarian suffering. Most of those who are stranded are on the Belarus side of the border, and while Western officials said they numbered in the “thousands,” it is difficult to know exactly how many are stranded at the border or in Minsk waiting to make the journey there.

The Iraqi government announced this week that it would arrange repatriation flights to bring back Iraqi citizens who wanted to return. It said the Iraqi Embassy in Moscow was handling procedures, including issuing travel documents to those who had torn up passports with the intention of seeking asylum. Several hundred of the migrants are believed to have registered for the flights but most remain at the border.

With tens of thousands of soldiers from Belarus, Poland, Lithuania, Latvia and Estonia dispatched to the border, there was no indication that the plight of the migrants trapped at the border would ease anytime soon.

On a desolate road on the Polish side of the border with Belarus, a married couple from Iraq and a man from Syria were struggling. They had been beaten and robbed and had nowhere to turn.

In the darkness, they happened to stumble across volunteers for an ad hoc group of activists helping migrants who make it across the border.

“The men were beaten with a metal crowbar,” said Marysia Złonkiewicz, who is part of the coalition, Grupa Granica. “The woman had some clothes torn off. They were robbed of everything they had with them. The person in the most serious condition was taken to hospital.”

The story she relayed was just one of dozens of harrowing scenes that humanitarian workers outlined at a news conference on Friday.

The experiences of the migrants — barred from entry into Poland and the other Baltic nations that border Belarus but prevented from returning to the Belarusian capital, Minsk — offered a searing portrait of the dire conditions thousands of men, women and children are facing on Europe’s eastern frontier.

Access for journalists along the border has been essentially banned by all of the nations involved, making it difficult to independently assess the scale of the suffering.

The coalition has been able to reach 113 men, women and children to provide food, water, clothes and medical care.

“We have no illusions that the situation is driven cynically and cruelly by the cynical game of the Lukashenko regime,” he said, referring to the leader of Belarus. “People on both sides of the border need to be provided professional help.”

The vast majority of the migrants remain on the Belarusian side of the border, where the government has tightly controlled information and access by both humanitarian workers and journalists.

The World Health Organization, in a statement issued on Friday, said preliminary results from a continuing survey found that over a third of respondents required medical treatment during their journey while three in five of those who spoke to the W.H.O. require treatment and medicines for an ongoing health condition.

“I am very concerned about the thousands of vulnerable people who are stranded in no man’s land on Belarus’s borders with Poland, Latvia and Lithuania, at the mercy of the weather as winter fast approaches,” said Dr. Hans Kluge, the group’s European regional director for Europe.

“Women and children are sleeping outdoors in the bitter cold,” he said. “Several people have already died. And Covid-19 cases are rising sharply across the region.”

The confrontation over migrants trying to reach the European Union has a long and growing list of players: Belarus, Poland, Lithuania, Latvia, Russia, Germany, the European Union, the United Nations, Iraq, Syria and Turkey.

Belarus has granted visas to thousands of people, many of them from Iraq and Syria, to fly to its capital, Minsk, and then escorted them to its borders with Poland, Lithuania and Latvia, E.U. countries that refuse to admit them. Visas in hand, migrants have been boarding flights in Istanbul, Moscow and elsewhere to reach Belarus.

On Friday some of those routes were closing after the European Union put pressure on some of the airlines involved. Turkish Civil Aviation and the Belarusian airline, Belavia, both announced Friday morning that Iraqi, Syrian and Yemeni citizens would no longer be allowed to board flights to Belarus.

“Due to the problem of illegal border crossings between the European Union and Belarus, it has been decided that the citizens of Iraq, Syria and Yemen who want to travel to Belarus from Turkish airports will not be allowed to buy tickets and boarding until further notice,” the Turkish statement, released on Twitter, said.

Belavia, which operates joint flights with Turkish Airlines from Istanbul, warned in a message on its website that passengers from Iraq, Syria and Yemen would not be allowed to board flights to Belarus from Turkey and offered them a full refund.

Earlier in the week, Ursula von der Leyen, president of the European Commission, said the E.U. would “explore how to sanction, including through blacklisting, third country airlines that are active in human trafficking.”

It is not clear how the E.U. would define “human trafficking,” or how an airline is supposed to distinguish between a tourist and a migrant. Iraqis, who have made up the bulk of the passengers traveling from Istanbul, have traveled with visas for Belarus.

And not all of the routes have been cut off. Travel agents working with people looking to get to Belarus said they were working to find alternatives. On Friday evening, there were still flights to Minsk from Dubai on FlyDubai.

The Turkish government, which has been criticized in the past for pushing refugees toward Europe to further its own political agenda, but has also struggled to host nearly four million refugees, on this occasion sided with European and fellow NATO members.

But Ankara also took affront at any threat of European sanctions. On Thursday, the Foreign Ministry released a vehement statement in response to speculation that the Turkish airline could be penalized.

“We reject the efforts to portray Turkey as part of a problem that it is not party to. Moreover, we find it deliberate that Turkish Airlines, one of our globally respected companies, is being targeted, despite sharing information on the matter transparently,” the ministry said.

The statement made clear where Turkish government sympathies lie, referring to people “illegally crossing into our allies Poland, Lithuania and Latvia.”

Many of the migrants boarding flights from Turkey have expressed no interest in staying in Belarus, an economically troubled, repressive country that is under Western sanctions, and openly told reporters that they wanted to reach the European Union, where they hoped to find asylum and work.

As a result, many of them are camped at the border in unsafe conditions — a humanitarian crisis that the West accuses the Belarusian leader, Aleksandr G. Lukashenko, of creating intentionally to pressure the E.U. to lift sanctions.

Thousands of migrants, mostly from the Middle East, have traveled to Belarus in hopes of reaching the European Union, but have been prevented by Poland and Lithuania, E.U. member countries, from entering. They are camped along the border with Poland, stranded in the bitter cold.

SULAIMANIYA, Iraq — Amer Karwan’s mother sobbed as her son climbed into a taxi Friday morning, dressed in the new puffy olive green jacket and gloves he hoped would keep him warm in Belarus.

His father thrust a handful of Iraqi dinars into his son’s hand, waiting for the taxi door to close before wiping tears from his eyes.

“He is my only son, but I can’t stop him from leaving,” said Bayan Omar, Mr. Karwan’s mother. “He tells me ‘Can you guarantee me a life, a house, a car and to be able to get married?’”

The night before, she and her daughters and nephews sat with Mr. Karwan in the living room as Kurdish television showed images of the harsh conditions among the migrants on the border.

“I have heard that the situation is not good in Belarus, but I have to go because there is no life, no job opportunities, no human rights, no equality and justice — no joy at all,” said Mr. Karwan, a carpenter, who turned 20 on Thursday.

He celebrated his birthday by picking up his ticket and visa to Belarus from a travel agency and playing one last late-night game of soccer with his cousins. He and three friends he was traveling with waived off the travel agent’s warning that the tickets were not refundable.

Although his mother was upset, he said, she agreed that he would have a better future in Europe. He said that two years ago her brother had been killed because he fell in love with a woman whose family did not approve of the match.

If he made it to Europe he said he planned to open a fast-food restaurant or work in a carwash.

“In Europe, whatever you want to be they give you support,” he said. “If all Iraqis died at the border right now the Iraqi government won’t care but if one American lady died here the U.S. government would destroy Iraq because of her.”

“These are countries that protect and love their people.”