Latest News
Home /LeBron James ejected after a strike to an opposing players face leads to an on-court scuffle – CNN
The ejection is only the second in James’ career — the first coming in 2017 for comments made to a referee.

Sunday’s altercation occurred with 9:18 remaining in the third quarter and the Lakers trailing 78-66 in Detroit. As a free throw was being attempted, James swung his arm backward while boxing out for a rebound, hitting Stewart.

The foul led to a prolonged game stoppage while Stewart, with blood coming down his face, had to be held back by Detroit coaches and players as he tried to confront James on several occasions. Stewart was also ejected from the game.

Both James and Stewart did not speak to the media postgame. CNN has reached out to the National Basketball Association (NBA) and Lakers for comment. 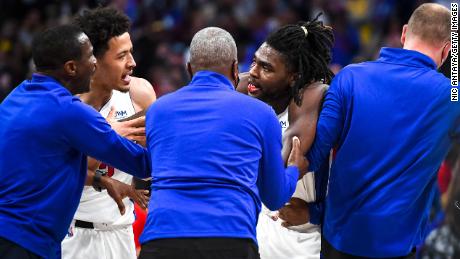 Lakers teammate Anthony Davis came to the defense of James after the game, saying that James isn’t a “dirty guy” and that he wasn’t sure why Stewart reacted the way he did.

“I’ve never, in 10 years, seen a player try to do that as long as I’ve been playing, at least in basketball. It’s uncalled for. You got a cut above your eye, accidental — like, it wasn’t on purpose. And we weren’t going to allow him to keep charging our brother like that,” Davis said. 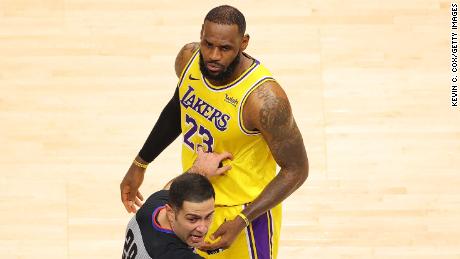 Lakers head coach Frank Vogel said he spoke to James in the locker room after the game.

“Yeah, that’s really something that should stay in the locker room,” Vogel said. “I mean, I talked to him, yup, but I’m not going to disclose what his message was.”

“I told him, ‘Don’t let this define who you are. It doesn’t define your game whatsoever.’ I felt for the young man because he’s such a competitor and he plays so hard. He’s a great kid but he felt like he got cheap-shotted across his brow and on the street, it would be a different story,” Casey said.