Latest News
Home /Antonio Brown is no longer a part of the Tampa Bay Buccaneers after he takes off jersey and leaves sideline mid-game, coach says – CNN

Bucs receiver Antonio Brown seems to have retired mid-game, as he was seen on the sideline taking off his jersey and walking away from the team.

Video from CBS showed that Brown appeared to be upset on the sideline and inexplicably started to remove his jersey and pads while teammates pleaded with him to stay. A shirtless Brown could be seen throwing his undershirt into the stands as he made his way into the stadium’s tunnel while waving a peace sign.

Bucs quarterback Tom Brady told reporters after the game the incident was “obviously a difficult situation.” 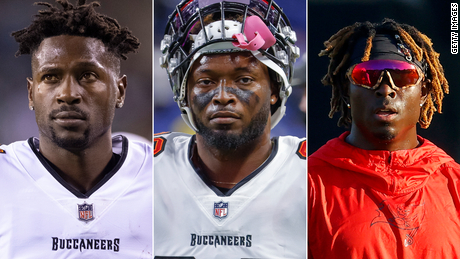 “We all love him and care about him deeply,” Brady said, adding their relationship goes beyond being teammates. “I think everyone should be compassionate and empathetic toward some very difficult things that are happening.”

Brady said he was unaware of the details of the incident until after the game.

After the game, Brown tweeted a photo of himself with the cryptic caption “Super Gremlin.” A couple of hours later, Brown tweeted a link to his new single, “Pit Not The Palace.”
The incident comes weeks after Brown said he was suspended in December for three games without pay following a league investigation that determined he violated Covid-19 protocols.

In a news release, the NFL said there was evidence Brown and two other players had “misrepresented their vaccination status.” The other two players were Buccaneers safety Mike Edwards and free agent wide receiver John Franklin III, who has been on the Bucs’ practice squad.

The Pittsburgh Steelers drafted Brown in 2010, and he played for them the first nine seasons of his career. Brown was traded to the then-Oakland Raiders ahead of the 2019 season but was released before playing in a regular season game.

Brown then signed with the New England Patriots and played one game before being released again, days after one of his former offseason athletic trainers filed a lawsuit accusing him of rape and assault in 2017 and 2018. Brown denied the allegations and said he would fight to clear his name. The NFL said at the time there was an ongoing investigation into Brown’s conduct.
Brown signed a one-year deal with the Buccaneers in October 2020.