“I am writing to invite you to address a Joint Session of Congress on Tuesday, March 1, to share your vision of the State of the Union,” Pelosi wrote in a letter.

The State of the Union address is a tradition that offers Presidents a chance to highlight their priorities and agenda at the start of a new year.

If Biden gives the speech on March 1, that would be about a month later than is typical for the annual address. Since 1934, all State of the Union speeches have happened in January or February. 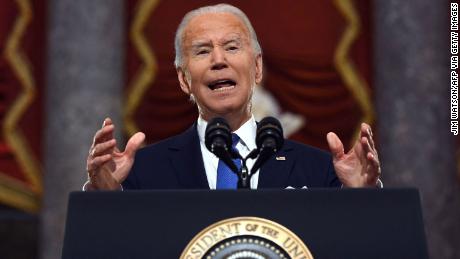 Delivering the State of the Union in March would give Biden more time to try to accomplish some of his legislative goals before addressing Congress and the nation.
The Build Back Better Act — a key part of Biden’s domestic agenda that aims to expand the social safety net and fight climate change — has hit a roadblock in Congress amid opposition from moderate Democratic Sen. Joe Manchin and it is not clear whether the legislation will be able to move forward.

While the Constitution mandates a president to update Congress on the “state of the union,” it does not provide a timing requirement beyond “from time to time.”

Biden delivered his first address to Congress as President in April 2021. That was not designated a “State of the Union” speech because since 1977, new presidents have not referred to the first speech before a joint session of Congress that way, instead typically calling them an annual message or address.
A number of health and safety protocols were put in place for that speech due to the Covid-19 pandemic, including a limit on the number of lawmakers allowed in the House chamber.

This story has been updated with additional developments Friday.

What the Bengals’ and Bills’…

Concerns mount for Tonga after…

Hospitals Confront the Fallout From…