The eruption near the island Kingdom of Tonga in the South Pacific set off a tsunami that will affect the entire West Coast. The Tonga Meteorological Services issued a tsunami warning for the archipelago, and data from the Pacific Tsunami Warning Center detected waves just under 3 feet high.

The NWS in Portland, Seattle and the San Francisco Bay Area indicate just how widespread authorities expect the wave to be.

The tsunami alert has hit “advisory” level, which means waves up to 3 feet high and conditions in the water remain dangerous.

Early reports from Hawaii indicate that the tsunami did not cause “inundation” or flooding in the affected areas but boats have ended up on docks, which may have resulted from the tsunami. 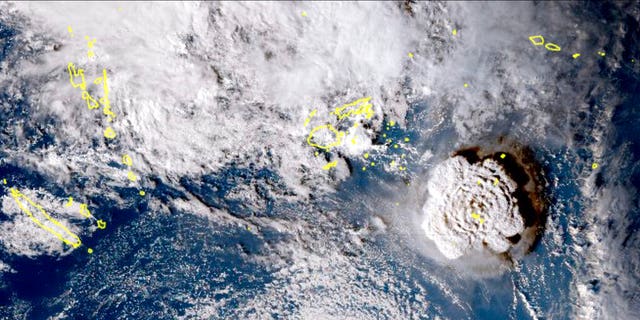 In this satellite image taken by Himawari-8, a Japanese weather satellite, and released by the agency, shows an undersea volcano eruption at the Pacific nation of Tonga Saturday, Jan. 15, 2022. An undersea volcano erupted in spectacular fashion near the Pacific nation of Tonga on Saturday, sending large waves crashing across the shore and people rushing to higher ground. (Japan Meteorology Agency via AP)

“We are relieved that there is no reported damage and only minor flooding throughout the islands,” the Pacific Tsunami Warning Center said of the situation in Hawaii.

But residents in mainland coastal areas are still advised to “move off the beach and out of harbors and marinas.”

NWS Seattle warned that the first waves will hit just before 9 a.m. PT Saturday, with larger waves to hit after and continue to impact the coast “for hours after the initial wave.”

“Bottom line: Continue to stay out of the water and away from shore along coastal areas and continue to monitor for updates,” NWS Seattle tweeted. The wave will hit earlier farther down the coast: The first wave should hit Newport, Oregon around 8:30 a.m. PT. The Bay Area should expect its first wave to hit at around 7:35 a.m. PST.

Weather services warn that the tsunami will produce strong currents that create hazardous conditions for swimmers, boats and coastal structures.

The most recent tsunami to hit the U.S. West Coast prior to this weekend occurred in 2011 following the incredible magnitude 9.0 earthquake that hit Japan. The resulting wave caused $100 million worth of damage to California ports and harbors, according to the Los Angeles Times.