The world No. 1 was utterly dominant throughout the tournament and clinched a historic title without even dropping a set.

Australian tennis fans had to wait more than four decades for one of their own to be crowned Australian Open champion, with the last home win coming courtesy of Chris O’Neil.

Barty’s grand slam tally now stands at three — her previous titles coming at the French Open in 2019 and Wimbledon in 2021 — and the 25-year-old is without a doubt currently the most dominant force on the women’s tour.

With most of her career likely still ahead of her, the only question remaining around Barty’s grand slam credentials is: how many?

“I’ve said numerous times I’m so lucky tonight to have numerous people here that love and support me,” Barty said in her post-match interview. “I’m a fortunate and lucky girl to have so much love in my corner, we started together right from the start. We did it all together, nobody has changed from our team. I love you to death.

“As an Aussie the most important part of this tournament is being able to share it with so many people and the crowd, you have been nothing short of exceptional.

“This crowd is one of the most fun I’ve ever payed in front of and you guys brought me so much joy today and helped me play my best tennis, so thanks for all your love and support over the last couple of weeks.

“This is a dream come true for me and I am so proud to be an Aussie. See you next time.” 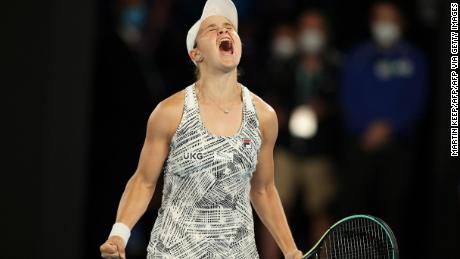 Neither player showed any signs of nerves in the opening stages and exchanged some blistering shots early on.

Collins’ trademark backhand was causing Barty all sorts of problems, with the Aussie struggling to contain the powerful groundstroke as it ripped through the Rod Laver court.

However, Barty was able to respond on her own serve, crushing an early 181km/h ace past her opponent as she managed to save an early break point — much to the delight of the crowd.

The partisan home support was certainly showing its allegiances early on, erupting each time Barty won a point. They were then really given something to cheers in Collins’ third service game, as a couple of loose groundstrokes and a wild double fault gifted Barty a break of serve.

That certainly helped release any tension Barty was still feeling, as the home favorite ripped off two more holds of serve to claim the opening set in the blink of an eye.

Even Collins’ reaching the final is one of the most remarkable comeback stories in tennis.

In April last year, she underwent emergency surgery for endometriosis — a condition where the tissue that lines the uterus grows outside of it — and had suffered an abdominal injury at the French Open. 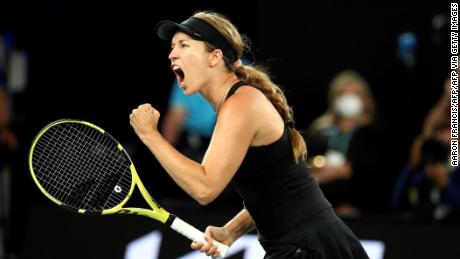 The 28-year-old has spoken candidly about the excruciating pain she endured, describing it as some of the worst she has experienced.

Collins has credited the surgeon for saving her career and she’s now playing some of the best tennis of her life, with her run to final in Melbourne projected to push her into the world’s top 10 for the first time.

Huge credit must go to the player for remaining unperturbed that a close opening set had gotten away from her so quickly.

The American often wears her heart on her sleeve on the court, but had so far kept her emotions hidden on the biggest occasion of her career.

However, that changed at the start of the second set as Barty once again began to struggle with her opponent’s powerful shots, which now seemed to have just a little more sting.

Two uncharacteristic errors from Barty in her opening service game of the set allowed Collins to break for the first time in the match.

Rod Laver arena fell largely silent, save for Collins’ roar. “Come on,” she shouted, fist clenched towards her box.

It had been quite a remarkable change in momentum from the opening set, with Collins now dominating almost every rally. 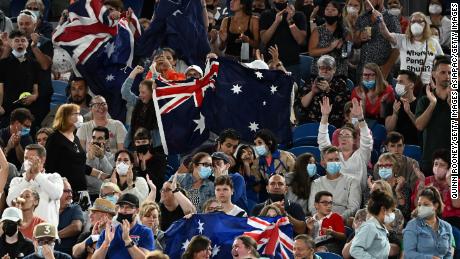 The crowd, sensing Barty’s nerves, did their best to get her back into the match; one forehand winner down the line was greeted with the perhaps the loudest cheer of the night so far.

However, it wasn’t enough to get Barty back on track as the size of the occasion now seemed to be weighing heavily on her.

The forehand was becoming wild and erratic and Collins found another break of serve to seemingly put the set out of her opponent’s reach.

But Barty, the fighter that she is on the court, battled back and recovered one of those breaks of serve, before firing off a love service game to pile the pressure back onto Collins.

It was pressure Collins couldn’t handle as her first serve and usually trusty backhand deserted her, gifting Barty a second break of serve.

The Rod Laver arena, which had been subdued for most of the second set, erupted and was now louder than it had been all evening. 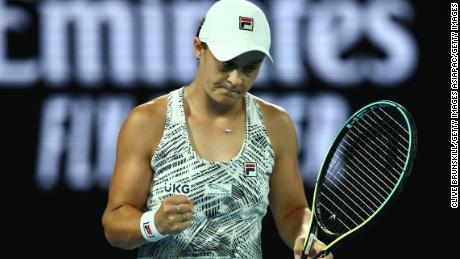 At one point, Collins seemed unhappy with a number of the people in the crowd who had begun shouting before the points were finished, leading the umpire to warn those in attendance about their conduct.

Barty held serve to level the scores at 5-5 and what looked like 20 minutes ago was going to be a walkover set for Collins had now turned into a slugfest.

Both players put in solid service games to take the set to a tie break, though Collins must have been wishing those first serves had come a couple of games earlier.

Barty raced into 4-0 lead in the tie break and never looked like losing it from there, eventually closing it out 7-2 — and it was now party time on Rod Laver.

After waiting 44 long years, Australia once again has its own grand slam singles champion.